Status
This thread has been closed and cannot be replied to. 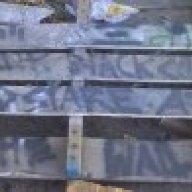 Just so everyone knows for security reasons if I can't vet you, you probably won't get into the fb group.... Sorry...

@Engineer J Lupo
They already know what their doing is wrong I think...... 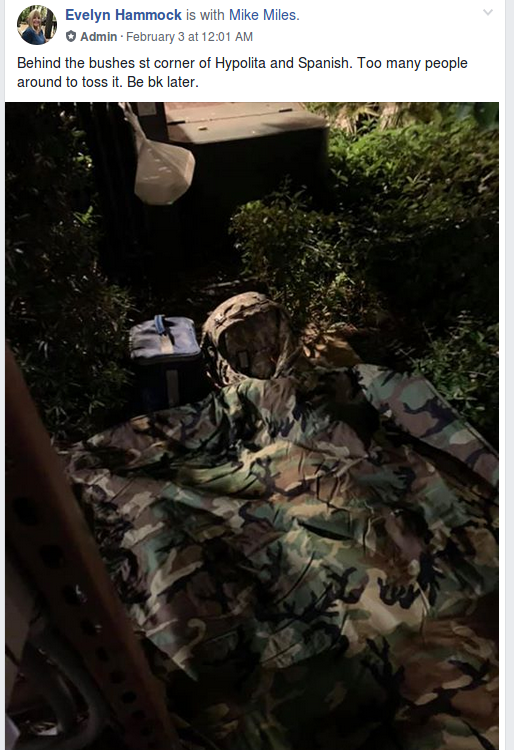 I'd love to see this get to the ACLU or NPR, perhaps Al Jazeera. They would take this and run with it nationally.

I'm so freakin'proud of you all defending our right to exist, however futile it may be in this capitalist-run nation. Things will change, come the fall, or revolution!


Engineer J Lupo said:
That stinkin lady is such a psychopath about this that she's managed to get herself arrested,
Click to expand...

Ooooo, juicy! What's the story behind that?
B

joeycalzone said:
They already know what their doing is wrong I think......

too many people around to toss it....
wow they literally know what they're doing is wrong. They're gonna throw away someone's belongings. WTF. This group needs to be stopped. This is disgusting and inhumane. Please please please show this to Facebook support.
B

Ooooo, juicy! What's the story behind that?
Click to expand...

read earlier in the thread. essentially she was tresspassing looking for homeless people to attack so she was arrested.

I read that they did acknowledge the report of their GoFundMe I reported before but received no update from that site yet. I will give you the update as soon as I get one. Even they are aware of this thread I linked them. 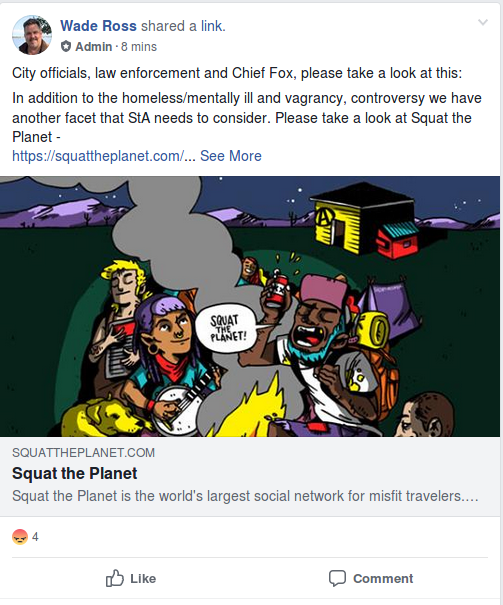 I think these are empty threats the police already don't listen to these people.
Also on a St. Augustine News Page 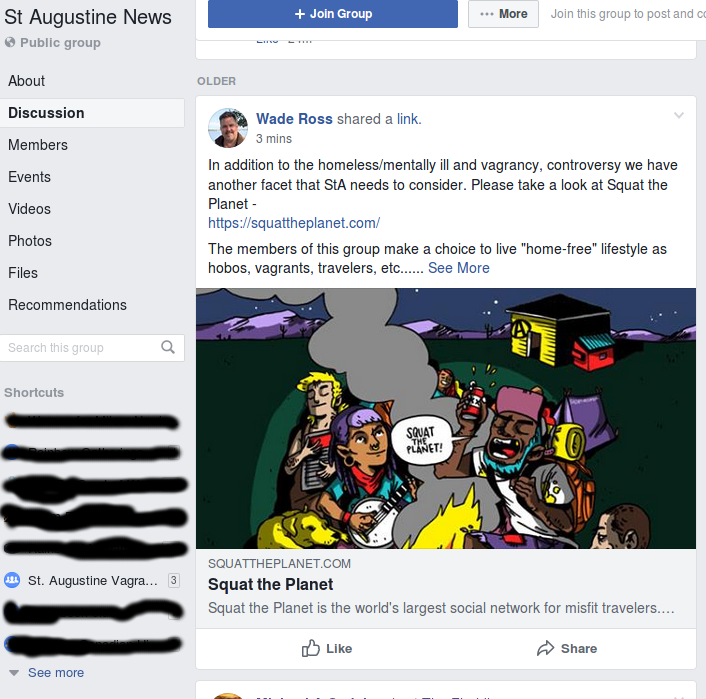 Tried to join the news group and got banned guess who the admin/mods are..... 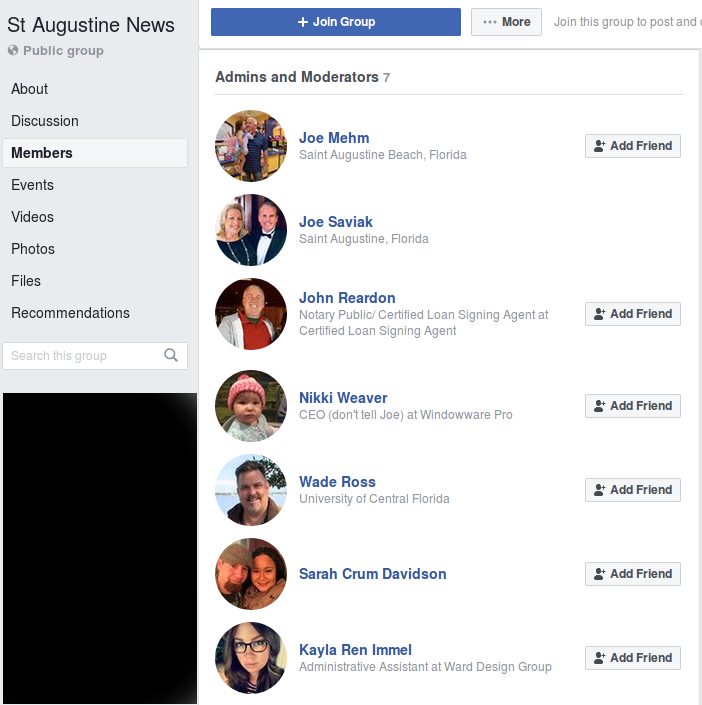 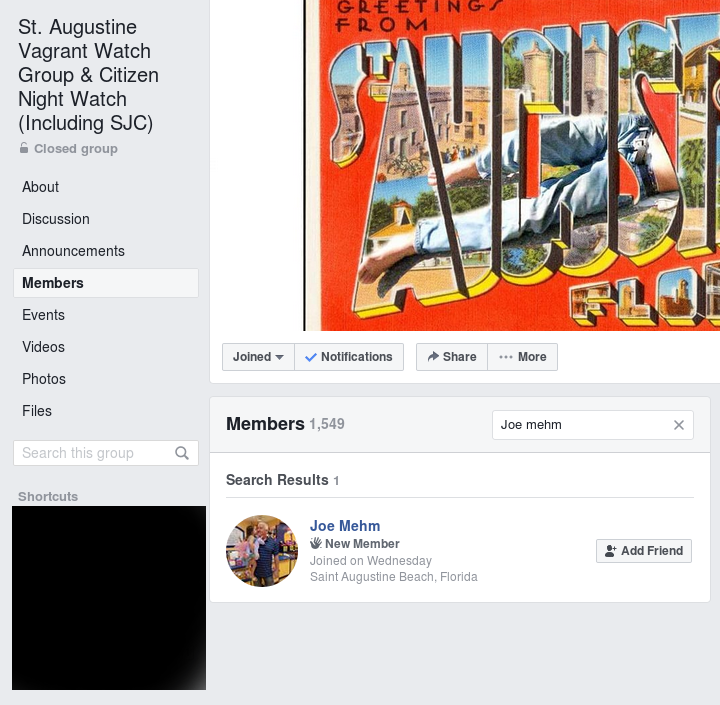 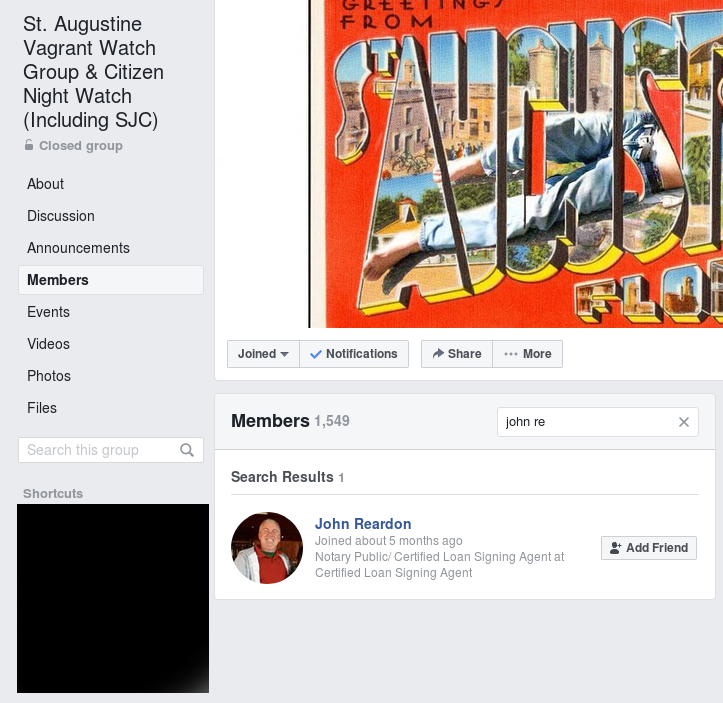 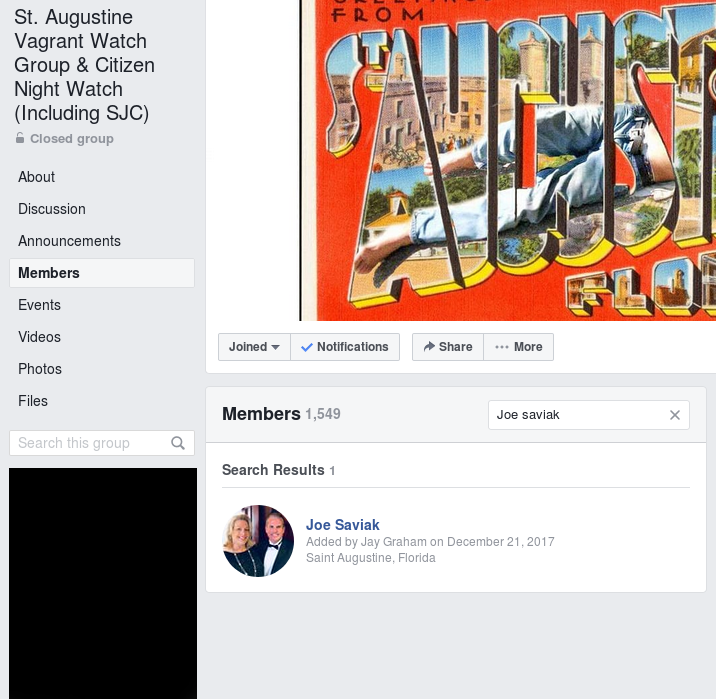 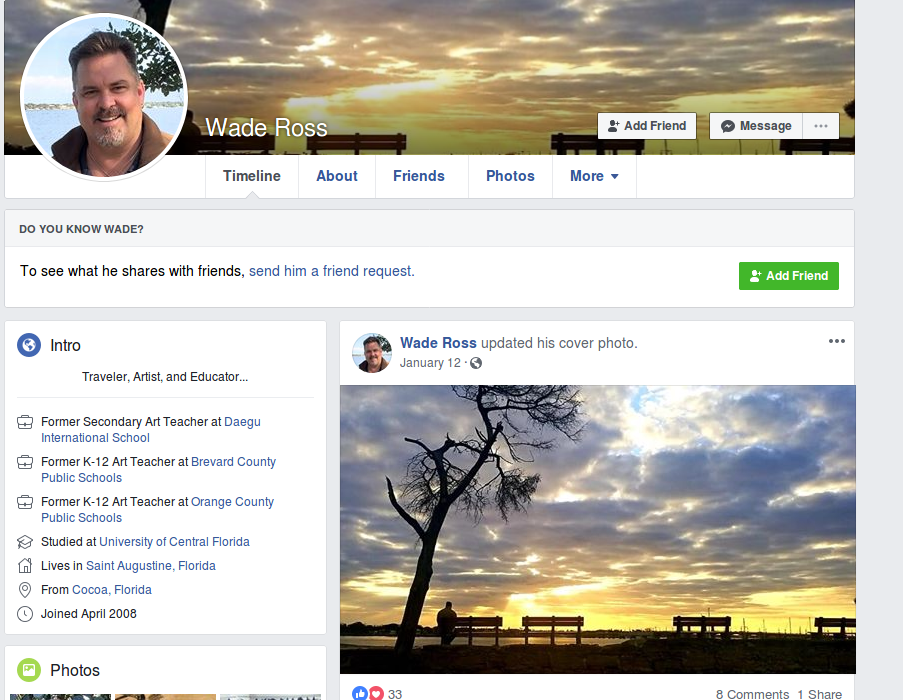 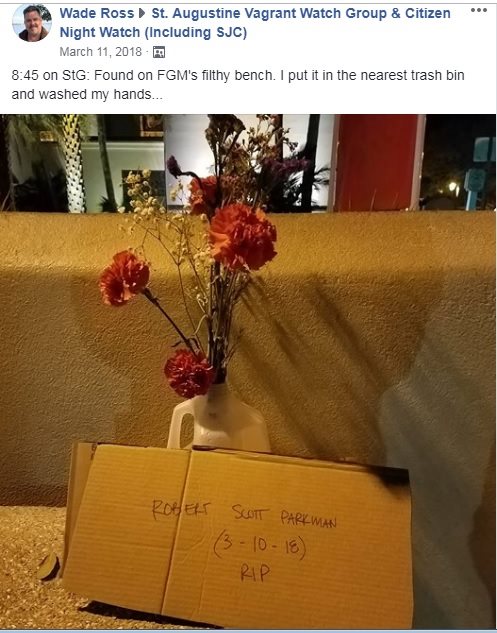 Dear Wade,
Since you won't actually have a conversation with me I'll just put this here. The closest I've come to threatening you is telling you that I will take your hate group down and posting a meme from like 2009. Why are the people you call subhuman - or, no, wait, "untouchables" and "vermin" - somehow more deserving of this treatment than the ones who steal from them and harass them when they have everything? This is what you do to people everyday in your little group and we have proof. Also why would you be scared of getting doxxed if you didn't realize what you're doing is wrong?? 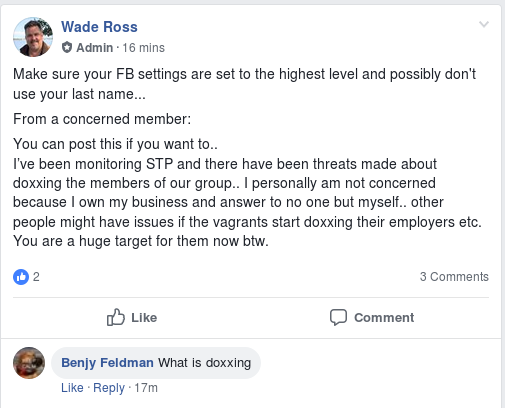 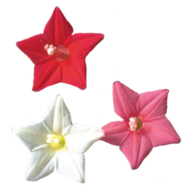 These people act like they're cleaning up our streets, but they're the real garbage.

I've been following along on this thread for a while now and just seeing all the shit these people pull sickens me. There's literally no point in their actions! They aren't helping people. They aren't fixing anything. They're just picking easy targets to harass in a futile effort to fill some sad, empty part of themselves. It's gross.

How could you just toss someone's memorial in the trash? It doesn't matter if they were rich, poor, or whatever, but that memorial was a creation made in their name by someone that cared about them. It's the equivalent of stealing flowers off of someone's grave or defacing a headstone. I hope some weird street ghost haunts their ass. Maybe a bit of fear would ignite their long-dead hearts and squeeze just the slightest bit of compassion out of them!

And targeting people while they're sleeping? Going to GoFundMe after getting your own ass busted by the cops while looking for people to kick around? Throwing away the belongings of people who already have next to nothing? How does any of that sit right inside them? I'd be boiling over with shame and guilt if I were in these people's shoes, but they act like they're some type of neighborhood hero.

It's fine to want to help the homeless, but this isn't helping them. It's just filling them up with even more shit to deal with on top of being homeless. There are so many ways to do good in this world, but none of these are them. It's just hurting people for their own enjoyment. I will admit, there are issues in the homeless community regarding waste and harassment and all that, but none of this fixes that. If you want to help keep the streets clean, try to provide actual opportunities for them to get on their feet, instead of pushing them down even further. This bs makes me want to stand guard outside every homeless camp I know of.

I guess it's just how they were raised. Looks like the nations oldest city is a breeding ground for intolerance. Here's a link to an article written about the cities history with known hate groups.

I wouldn't be surprised if the two things are connected. When I first became aware of this group I would see posts like "Vagrant heading towards St Augustine!" when literally it was just some black dude on a bike..... most of them are pretty right leaning with some pretty "enlightened" views on race, gender, immigration etc.....
Last edited: Feb 25, 2019

Also the history of "Vagrants" and "Vagrancy" in the US has it's roots in racism and control of poor people.

The crime of vagrancy has deep historical roots in American law and legal culture. Originating in 16th-century England, vagrancy laws came to the New World with the colonists and soon proliferated throughout the British colonies and, later, the United States. Vagrancy laws took myriad forms, generally making it a crime to be poor, idle, dissolute, immoral, drunk, lewd, or suspicious. Vagrancy laws often included prohibitions on loitering—wandering around without any apparent lawful purpose—though some jurisdictions criminalized loitering separately. Taken together, vaguely worded vagrancy, loitering, and suspicious persons laws targeted objectionable “out of place” people rather than any particular conduct. They served as a ubiquitous tool for maintaining hierarchy and order in American society. Their application changed alongside perceived threats to the social fabric, at different times and places targeting the unemployed, labor activists, radical orators, cultural and sexual nonconformists, racial and religious minorities, civil rights protesters, and the poor. By the mid-20th century, vagrancy laws served as the basis for hundreds of thousands of arrests every year. But over the course of just two decades, the crime of vagrancy, virtually unquestioned for four hundred years, unraveled. Profound social upheaval in the 1960s produced a concerted effort against the vagrancy regime, and in 1972, the US Supreme Court invalidated the laws. Local authorities have spent the years since looking for alternatives to the many functions vagrancy laws once served.
Click to expand...

Also here is a history of Vagrancy Laws in Virginia:
https://www.encyclopediavirginia.org/Vagrancy_Act_of_1866

On a political and heritage note, maybe if I walk around St. Augustine wearing a Confederate flag bandana over my head, that should be more than enough to piss them off! If they're anti-Trump, 99% chance they're also anti-Confederate. And I would love to record their faces on video as I laugh at their stupidity!


joeycalzone said:
I wouldn't be surprised if the two things are connected. When I first became aware of this group (about a year ago) I would see posts like "Vagrant heading towards St Augustine!" when literally it was just some black dude on a bike..... most of them are pretty right leaning with some pretty "enlightened" views on race, gender, immigration etc.....
Click to expand...

joeycalzone said:
Also the history of "Vagrants" and "Vagrancy" in the US has it's roots in racism and control of poor people.
Click to expand...

I'm pretty sure most of them support trump and the confederacy.....

quad8 said:
On a political and heritage note, maybe if I walk around St. Augustine wearing a Confederate flag bandana over my head, that should be more than enough to piss them off! If they're anti-Trump, 99% chance they're also anti-Confederate. And I would love to record their faces on video as I laugh at their stupidity!
Click to expand...

... Say what? Anti-Trump means there's a 99% chance they're anti-confederate? That absolutely cannot be right. Sorry to call you out on shit so often but come on dude, you really believe that? Do you wear confederate flag bandanas in your regular everyday life? Just curious. Also, how do you get the impression these people are anti Trump in the first place? I'd bet your life on it every single one of them voted Trump.

I have one but I never wear it very often. Still, I would like to see their reaction IF I did! That's out of curiosity also. I have seen and heard about many hate groups over the years, even in the news. It led me to believe that if they hate homeless people, they would hate just about anything else - even a stick of gum stuck to their shoes, who knows...?!

Of course you have a confederate flag bandana that you never wear except sometimes. It's all making a little more sense now.

ya these people are repulsive and evil, unfortunately i know a couple of these types from my very conservative home area in Maryland (very similar to Florida i believe)

how in the fuck could you throw someone's tent or jacket away under any circumstances i just don't get. they are PREYING on vulnerable people and CELEBRATING their abuses on a public social media platform, am I lying?

this has gotten me thinking a bit about this forum and what regular posters have in common ..

this is not my point, however - the first thing that comes to mind and really sticks that everybody has in common on this forum is an awareness that money is not what life is all about... that it is secondary to life experience which is lost on many people caught up moreso in the paper chase.

the phrase 'squat the planet' literally epitomizes this idea no? like what has been stolen from us as humans in this civilization? we have to take that back because we all in some fashion recognize that something is missing and it's undoubtedly not going to be fulfilled by having a certain salary, credit rating, etc. to put it lightly, fair?

I'm going into rant territory so i will just end with this - objectively, kicking people who are down is absolutely evil - and forcing all of civ onto a hamster wheel of "pay rent or die" is not functional.

Status
This thread has been closed and cannot be replied to.

Pollywantacracker
Looking for someone or a group to travel with and show me the ropes. Total newbie
Yesterday at 9:02 PM •••

brando
Much nicer riding weather today! Howdy, Austin! I'll be around a few days I think, trying to get new tires on the motorbike before I move on.
Yesterday at 1:30 PM •••

nastynaty
Im in the bay headed to reno tonight, had a good week with good people and good miles. The tehachapi loop gets prettier every time.
Yesterday at 10:32 AM •••