FrumpyWatkins said:
I was looking into getting an ALICE pack. Does anyone have experience using this backpacking "system"? How much do the Medium packs hold, stuff wise, not gallons (I find that to be a useless measurement)? Do they hold up well. I'm looking into the ALICE packs because they are available on the cheap at surplus shops.
Click to expand...

I avoid pacs with plastic snap buckles or zippers.
The Brnd. Road army surplus store, in chattanooga tn, has had the best prices i've seen for good alice pacs..after tax, they're around 30 to 60 dollars.

www.alleghenywholesale.com these guys have the large packs with frame and straps for $40 shipped but they have a $50 minimum order. they have alot of other really cool stuff too

^^ I got mine from Allegheny. When they say new condition, they mean it. Good seller. They even included a handwritten note thanking me for my purchase.
B

Medium Alice packs have ill hiding spots in between the 3 front pockets and the bag, sew the bottom from inside the pocked so what ever your hiding doesn't just fall out on the floor behind you, another is on the back where the frame tucks under that pad, it`s on top of the pack between the pad and the bag, Its 2 small openings with 2 nice square compartments. 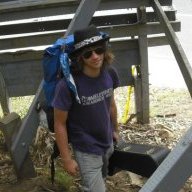 Hey there, ALICE packs totally kick ass for the money you spend on one, If you travel a lot and don't have a ton of money i recomend getting one till you find a quick job along the way, any pack better than ALICE packs that are worth spending on are gonna be around $100 bucks or mor. You shouldnt pay more than 60 dollars for a complete ALICE pack w/ frame and hip belt. If they want more than that move on to the next army store. The medium pack is useless, if you gonna get one just go with the large, its not that much heavier, and if on the off chance you pack light but need to carry extra, say a road dog's pack breaks, your gonna wish you had the extra room, i can carry all that i need plus all of my friends stuff (and she packed heavy). It's really easy to get used too, and the instant release shoulder straps are awesome, incase you need to make a run for your lifee or just dropping it at a camp. it can hold easily 60 Lbs worth of stuff w/o killing your back, has great pockets, and sturdy as hell, nothing breaks these packs. Great squat couch too. I had one until just recently and I'm upgrading to the new 2011 military pack, $300, Like i said, for sixty bucks its easily worth it and more.

I feel you there. I used to travel with a big alice pack and ended up realizeing that 90% of the stuff in there I didn't use. I emptied it out a few tiem and found things I totally forgot I had.

and having that much stuff held me back from doing a lot of the exploring that I woulda loved to have done in some citys. my pack was just way too heavey to even think about wandering around town with it weighing me down. And BECAUSE i had so much stuff I was way more scared to leave it stashed some place because if it got stolen I woulda been out a lot of crap.... although it wa crap I didn't really need, it was still MY crap. hehe.

and I know it's great to have a book... but I never understood why people carried around 2-4 of them. those fuckers get heavey. I'd only carry one, read it as soon as I could, and pass it on. public libraries provided the rest.

oh, and NEVER underestimate th usefullness of the USPS. if your pack gets heavey... mail some of the shit back to wherever "home" could be and lighten your load. I end up collecting a lot of crap sometimes and mailing it off to someplace safe helps a lot.
Click to expand...

That's something nice about a big pack, I always collect tons of shit like, stones, or old books, trade-ables, sometimes gifts and new equipment for friends, so Ilove having extra room just incase. I always need to mail shit i find somewhere.
W

I closed my account
I have a large alice pack and fucking hate ithaha , i miss my rubber swiss rucksack.. those.. once yer used to the leather straps are wonderful.. so if anyone wants to trade?

I own a large ALICE pack myself, and I'm sick of it. With or without frame.

Soooo, thanks to this thread, I'm gonna order a CFP 90 on eBay tomorrow. More than 10 are available apparently, if anyone is interested. Dirt fucking cheap, too. No idea why, especially compared to the other postings. http://www.ebay.com/itm/Tactical-Mi...US_CSA_MWA_Backpacks&var=&hash=item950379229f

Either way, I'll tell y'all about it whenever it comes in.

EDIT: Turns out it may be a knock-off. Balls.
D

Alaska said:
I own a large ALICE pack myself, and I'm sick of it. With or without frame.

Soooo, thanks to this thread, I'm gonna order a CFP 90 on eBay tomorrow. More than 10 are available apparently, if anyone is interested. Dirt fucking cheap, too. No idea why, especially compared to the other postings. http://www.ebay.com/itm/Tactical-Mi...US_CSA_MWA_Backpacks&var=&hash=item950379229f

Either way, I'll tell y'all about it whenever it comes in.

EDIT: Turns out it may be a knock-off. Balls.
Click to expand...


Seriously everyone. Military packs aren't anything special. In fact they are super shitty and uncomfortable. In my opinion the CFP 90 (at least a similar model) is more uncomfortable than the alice pack, and the new Molle rucks blow ass.......I would know, I'm in the Army.
K

I closed my account
The packs are heavy for their size, but in turn are durable and replacement parts are widely available. I have a medium with a frame. I travel light and it is plenty large for what I carry. If you travel in hot weather be sure to get a frame and you will have a bit more air circulation on your back which will help you stay cool. The pouches in back are great for losing small items as the flaps don't close tightly. Be sure to bag any small items you put in there or I will gladly pick up your flashlight/lighter/money/etc. that you lose in the catchouts.

how much do alice packs weigh? i have a kelty pack that holds 4750 cu inches and it only weighs about 4 or 5 lbs( i can remember exactly without looking for the specs) very rarely do i fill it all the way up. although when i do i can easily fit 10 days worth of food and supplies in it and still carry the load comfortably.

I've heard numerous good things about the CFP 90. Also, that eBay entry lies. It's actually 150 or some shit.

Anyways, I don't really have any alternatives. Every pack I can find is at least a hundred. I really don't know what to do. This ALICE is killing me.
K

abstracted said:
how much do alice packs weigh? i have a kelty pack that holds 4750 cu inches and it only weighs about 4 or 5 lbs( i can remember exactly without looking for the specs) very rarely do i fill it all the way up. although when i do i can easily fit 10 days worth of food and supplies in it and still carry the load comfortably.
Click to expand...

I'm guessing a medium alice with frame will weigh about that much and have about 1000 fewer inches space.
Disclaimer: This is only a guess
W

I closed my account
it doesnt weigh shit and holds a fucking horde, but it dont matter bout weight it's the design how it distributes the weight and the alice is designed to give hernias

wehavethemap said:
it doesnt weigh shit and holds a fucking horde, but it dont matter bout weight it's the design how it distributes the weight and the alice is designed to give hernias
Click to expand...

mmmmmmmichael said:
I'm guessing a medium alice with frame will weigh about that much and have about 1000 fewer inches space.
Disclaimer: This is only a guess
Click to expand...

well if that is the case, then it would just make sense to go for the pack with the most storage. i know when i dont have my pack filled up it is about the same size as an alice pack. although taller, its isnt as wide. i dont know. i see nothing wrong with the alice pack, but my preference is just with kelty, a good brand that has never failed me.

I love my alice, it sucks hardcore without a frame if you got lots of stuff. But i cant really stand how tall fancy packs are it makes me feel unorganized and pisses me off
T

I am giving one of the cfp-90 packs a workout today. Just a day hike with rockhounding gear. I will post up how well it works for an old, fat guy.

I used to think ALICE was as good as it gets but time seems to have changed that opinion. I stuffed all the gear into one yesterday and put it on and it was instant agony!

If the cfp-90 doesnt work I will have to try something else.

Location
where ever i lay my head

i travel with a large alice pack w frame. ill never go back. ive had this beast for almost two years and a friend had it before me. i wouldnt want anything else. i travel with insulated bibs sleeping bag some other clothes and some sneakers (usually wear boots) and all the stuff for my dog so its perfect size. and i still have room for other things as i need it such as train food. random stuff thats kicked down.
T

Well my rockhound buddy didnt tell me it was uphill BOTH WAYS!

Talk about a workout!

He said, "We are going to a fire agate field." Silly me, I thought field meant a somewhat level open area.

It was a 44 minute ride once we left pavement, just about straight up and down and roundy round, then it was about a two mile walk in to the "field".

Wound up with some exquisite fire agates, some jasper and a fantastic desert rose.(If it werent a jillion miles out in the middle of nowhere one could make some serious money on these fire agates)

Also wound up with a shitpot fulla cactus thorns, some in the ole nether regions.(desert rule, watch where you sit).

It was not loaded that heavy, just three days lightweight food, poncho and blanket, 4 pound sledge and big chisel, two one quart and one two quart canteen, medical kit, E-tool, extra mag for the .45(for when the first thirteen rounds just arnt enough to kill those damn zombies), two extra mags for the AR-15(mountain lions frequent the area and even jaguars might put in an appearance and dont forget about those damn zombies), flashlight, 2 space blankets, notebook and pen.

Ole fat man aint gonna be humpin 120 pounds in this pack, but it did ok for this short day trip.

For walking id recommend it. But remember its a BIG pack and even bigger when the optional patrol pack is added.
You must log in or register to reply here.

where to store your paperwork while traveling

The In-Between Today at 10:41 AM
Scat
My Introduction

Introductions Nov 12, 2020
Exadev
W
Anyone once a traveler and then not knowing how to live day to day off the road?