Man Bikes Around the World With $2 in Pocket (1 Viewer)


IF YOU THINK riding the stationary bike at the gym is exhausting, imagine riding your bike 28,000 miles through 37 countries in eight years. Tired yet?

Keiichi “Kei” Iwasaki , 36, of Japan began such an adventure when he grew tired of working at his father’s air-conditioning company. ”I thought to myself that ‘My life will soon be over before I do what I want to do!’ so I decided to start this trip,” Iwasaki told the London Telegraph.
Iwasaki left his home in Maebashi, Japan in April 2001 with just 160 yen, around $2, in his pocket with the intention of biking through Japan. He enjoyed the trip so much that he caught a ferry to South Korea. He has since been robbed by pirates and arrested in India, nearly died after being attacked by a rabid dog in Tibet, and narrowly escaped marriage in Nepal. 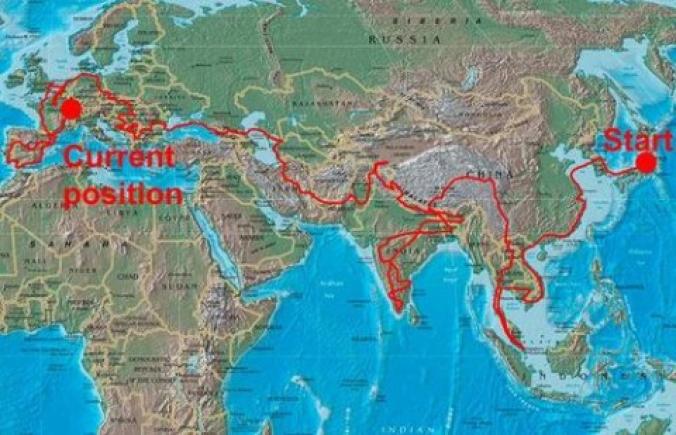 Iwasaki’s bikes (he’s on his fifth now; two were stolen and two were broken) have been his main form of transportation throughout the journey. He says he does not want to fly because “I wanted to see and feel everything with my own skin. With bicycle, I can always feel the air and atmosphere of the place.”

According to his blog, other than the occasional ferry, the only time he did not ride his bike or walk was when he used a hand rowboat. He first used a rowboat to travel from the source of the Ganges River in India to the sea, a distance of over 800 miles that took him 35 days. Iwasaki decided to also row the Caspian Sea when he was passing by and “I just wondered ‘how big Caspian sea is?’ so I tried to [cross] using hand rowing boat again, it takes 25 days,” he wrote.

He counts his biggest achievement as climbing Mount Everest from sea level without using any transportation, the first Japanese man to do so. Iwasaki is currently in Switzerland waiting to climb Europe’s highest peak, Mont Blanc.

Iwasaki funds his travels by performing magic tricks on the street. He plans to travel to Africa, through the Americas and finally, back to Japan. He believes the rest of the trip will take him five years, after which he wants to write a book about his adventures.

Photo: Above, via SMNS, Map, via The London Telegraph 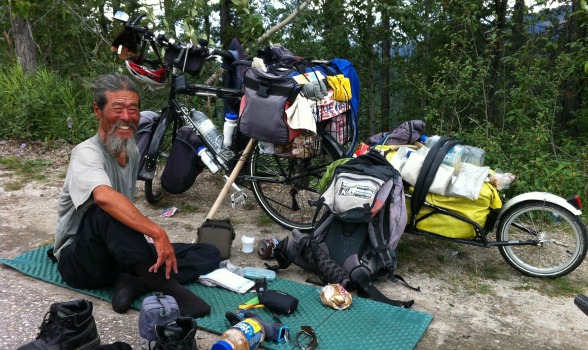 A Rockies encounter with an old traveller inspires Pat O’Connor to take a life-altering journey.

It came as a spasm of fear in the pit of my stomach, an intuition that my life was about to change dramatically, and there was nothing I could do about it.

I had comfortable life in the lovely southern Ontario city of London: a country club membership, a house in a trendy part of town, surrounded by friends and family. I could buy whatever I wanted. I was a successful publisher’s rep, nicknamed “Mr. Momentum.” But after the economic downturn sales dropped, phone calls were not returned and I found myself spinning my wheels.

Fearing change, not wanting to move on, I pushed harder, set new goals, re-organized, and re-executed marketing strategies. Nothing worked. The more I sped up, the more I pushed myself, the more exhausted I became.

Nine months later, the V.P. of Sales called me to her office. “Patrick, we have decided to move the division in a different direction. We’re sorry, you do not fit our plans.” She slid a severance check for a large sum across the table. I was shocked but relieved. The golden handshake alleviated my worries that I would lose everything.

I decided to go west to my beloved Canadian Rockies in Alberta and British Columbia. After 12 years of sales quotas, strategies, and appointments, I wanted to immerse myself the beauty of nature.

I bought a new touring bicycle, rented my house, and took the Canadian trans-continental train about 1,500 miles across from Toronto to Jasper, Alberta. My route was along the most stunning scenery in the world, including the Icefields Parkway and Banff National Park in Alberta.

On day one, I cycled beside the Athabasca River, mountains draped in glaciers all around me. The altitude caused my legs to ache, so I cycled into a viewpoint. People were taking pictures, but the sight of a mysterious man sitting beside a bicycle packed with gear caught my eye.

“Who is this?” I wondered as I pedaled toward him. He looked up at me with a smile.

“Hello! Sit down, sit down!” he commanded with a thick Korean accent. An older man, he had long black hair and a beard sprinkled with grey. His skin was brown and weather worn. His body was thin and hard, without an ounce of fat. He towed his worn and dirty gear on a trailer behind his bicycle. I was amazed how much he carried.

He sat on a green mat and motioned for me to join him, which I did. In the same commanding manner, he offered me water from an old pop bottle, a loaf of bread, peanut butter, and a knife. Obligingly, I made myself a sandwich. As cyclists do, I asked him where he was coming from.
“Los Angeles, California. I travel to New York, Niagara Falls, Toronto, across Canada to Edmonton, Jasper. I’m returning to Los Angeles.” He pointed to his chest and said, “I’m 70 years old. I travel around the world.”

I couldn’t believe what he was saying. “Korea, China, Europe, South America.” He pulled out photos of himself in France, Spain, Peru, and Argentina.

I was speechless. The magnitude of his North American journey alone (over 7,000 miles) challenged me deeply.

“Why are you doing this?” I asked. What would compel a 70 year-old man to take on such an arduous journey?

“For meditation,” he replied.

“No, monks have big ego,” he said smiling.

I laughed out loud at his declaration. I told him that I had practiced Zen Buddhism for two years. I shared my Zen name “Do Chun” (Dharma River). I showed him my Zen initiation scar on my right forearm. I clarified that I was, in fact, a Catholic. Now he was surprised. 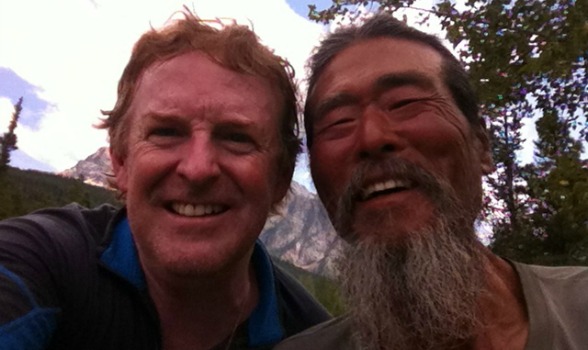 Don’t like ads? Become a supporter and enjoy The Good Men Project ad free
We discussed spirituality and the importance of remaining in the present moment. I felt a little shame that I had not been doing that in the past few years of my life. I had been consumed by my worldly problems.

“Where do you sleep at night?” I asked him.

“Beside the road. Wherever I stop,” he told me. This alarmed me.

“There are wolves, cougars, black bears, and grizzly bears in the Rockies!” I couldn’t help imagining a 900-pound Silver Tip tearing him apart.

“No problem,” he said with an air of utter confidence, a response that did not make me feel any less alarmed.

We talked about many things in a short while, including my conversion from Zen Buddhism to Catholicism. We prayed together, exchanged email addresses, and I climbed onto my bicycle. As I fixed my helmet on, he looked at me and said, “Just pedal, no push.”

I thanked him for his hospitality and got back on my bike. Taking his advice to heart, I let myself enter into the natural rhythm of pedaling, and was filled with an overwhelming sense of joy that I had just met an angel, a messenger from God. I knew deeply that all would be well—and not to push myself in my journey.

I said a prayer of thanks and asked God to keep my friend safe from bears. I realized that I had been worrying so much about the future that I had failed to live in the day. And it came to me how much I had limited myself in what I believed I could do with my life. I knew then that my comfortable life had in fact become a prison of the mundane.

A few days later, I decided that if a 70-year-old man can cycle around the world, I could cycle to Vancouver. After visiting my sister in Banff, I hopped back on my bicycle and cycled 750 miles to Vancouver.

It takes faith to “just pedal, no push.” It takes a daily, moment-by-moment decision let life be what it is. And it takes faith to trust that everything will be okay, even when I find it disagreeable.

Very misleading. He still hasnt biked the americas. So he hasnt biked atound the world. Yet. Still fucking epic though.

When I left out of Minneapolis last August I had twenty bucks in my pocket. All the way to Houston I always had at least a dollar but never more than twenty. Spent about two hundred. Money comes and goes but it isn't really a big thing if you carry everything you need. I only had sixty bucks when I crossed into Mexico a year and a half ago. It was the same. Never ran out.

How is biking in Mexico? Ever ran into any problems?

Mexico loves bicyclists. The roads are on average good and the "bicicleta" is part of the culture. It's easy to stealth camp in most of the country and much more accepted to have a campfire than in the US. Stop at the abarrotes in the afternoons and drink beer with the old men.

Anyone touring through OH/MI right now?

I'd be interested in hearing about favorite bike touring foods/meals. I've been sticking to oatmeal,brown sugar and mixed nuts. Dark chocolate all the time.
I try not to cook and primary eating vegan while on the bike. I'm the kind of guy who can eat the same meal over and over again and not tire of it.
D

I closed my account
since a question was asked on here I'll answer on here. I have eaten for months at a time and in general, I've hitched around with rice and lentils soaking in a cup to be cooked that evening. a big meal I'd have at my shack and even when living with my mom or house sitting whatever has been rice, sweet potatoes and an egg or two cracked open and stirred in a boiled in there. Or cheese mixed in for the fats. or olive oil.

It cost the average person more than 50 grand to climb Everest. How did he do it for free?
D

ElNayshon said:
It cost the average person more than 50 grand to climb Everest. How did he do it for free?
Click to expand...

No sherpa carrying his gear for him
You must log in or register to reply here.

Hobbies & Projects Jun 29, 2021
A zed
Man walks for kids with AIDS, Says he was inspired by Forrest Gump

Untrustworthy and Shady People Wednesday at 8:29 AM
Scat