If the last month of my life is any sign of the year to come, it’s going to be one hell of a year. I really had no idea what to expect when I got back to Slab City. It started on my last night in Austin, Texas. After having a few goodbye beers with my friends, my now ex-girlfriend Tapley walked me to the bus stop that I would be taking to the greyhound station. We held each other tightly and shared some of the best goodbye kisses I’ve ever had. She was one of the most beautiful and awesome women I’ve been lucky enough to have in my life, and to say I would be missing her would be just a bit of an understatement.

My bus pulled up, and I reluctantly got on and swiped my metro card. I turned around and watched Tapley through the bus window. She was waving goodbye, and as the bus pulled away I put my hand on the glass with a sad look on my face. As the bus moved along and she began chasing it, waving at me and jumping in the air. After a few blocks she was lost in the distance.

“Man, that was something straight out of a movie,” said a female passenger next to me. All I could do was nod in agreement. I wish we could have worked things out, but we still had our friendship, and she forever had a very special place in my heart.

Other than sleeping through one of my bus transfers and waking up at the Mexican border, the greyhound trip to El Centro, California was pretty uneventful. Kat Bastard and his wife Penny were there to meet me at the station, and together we drove the thirty miles north to Slab City. I spent the first two weeks not doing much of anything besides getting settled into my new surroundings. 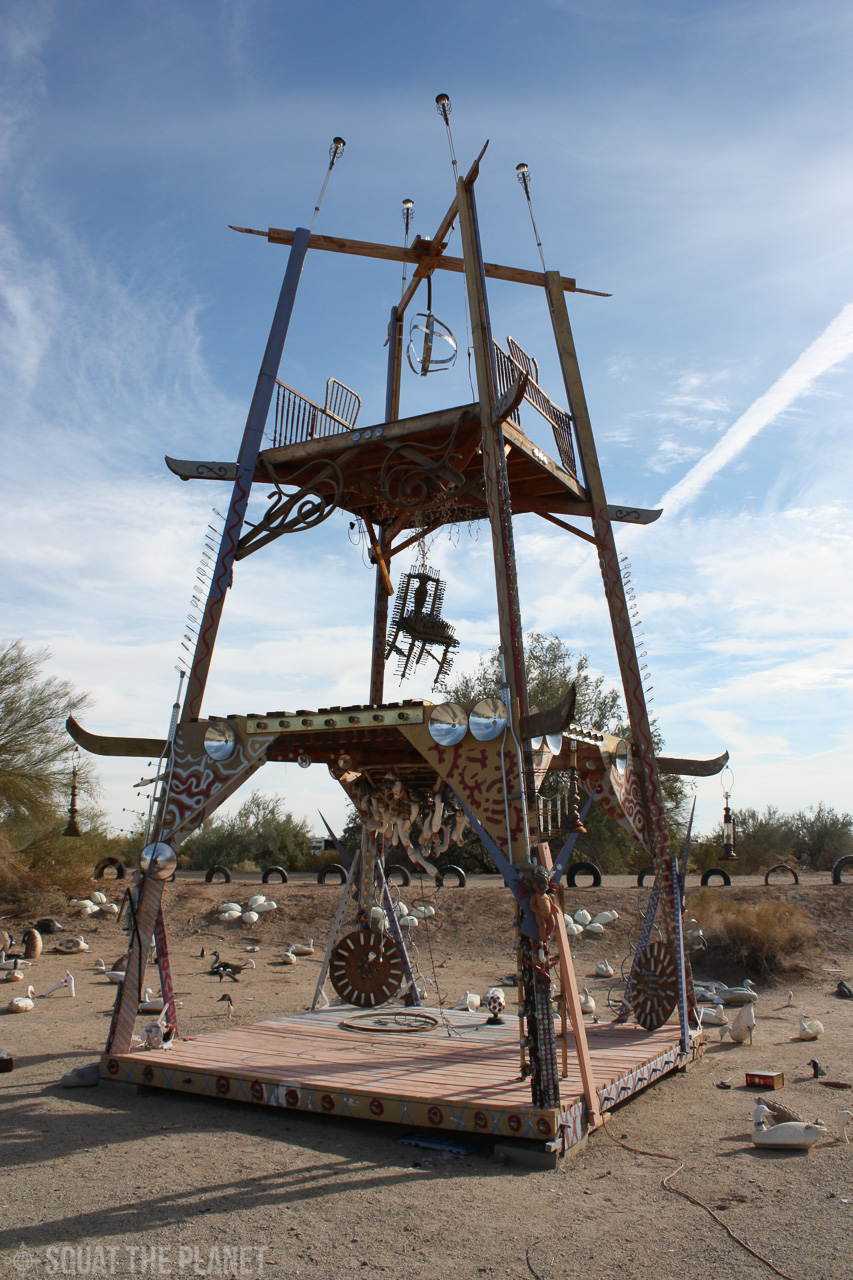 The Tower of Barbarella. December 2011.

My new home was a very special nook in the Slab City area called East Jesus. East Jesus was the brainchild of one Charles Russell, an artist with a bit of money and a plan to live outside society on his own terms. Five years ago he came out to Slab City with a shipping container he planned to use as the first structure of what would become a gypsy mansion in the desert. Today, it’s a quarter-mile encampment with multiple RVs and unusual structures populated by his friends and those that share a similar vision of living free of the bonds of civilization. Charlie’s passion for creating art and giving people a place to do so is one of the focal points of East Jesus, and it shows all around the property. Anyone that visits would be hard pressed to find a spot that isn’t decorated in some form, the mass majority of materials being scavenged from trash left in the desert.

The “Bordello” trailer, and music room next to it at East Jesus. December 2011.

The result is a place I’ve always dreamed of living, even as a child; even before I knew about the world of gypsies and wanderers; even before I realized my antipathy for the world; I always knew somewhere deep in my soul that this is place I was meant to end up. It’s a place of special beauty that seems only meant for misfits like myself, and every day I wish the whole world could be the same way. Yeah, it’s that awesome.

Charles Russell passed away in May of 2011. He left behind an amazing group of people who maintain his life’s work just the way he would have wanted it to be after he was gone. 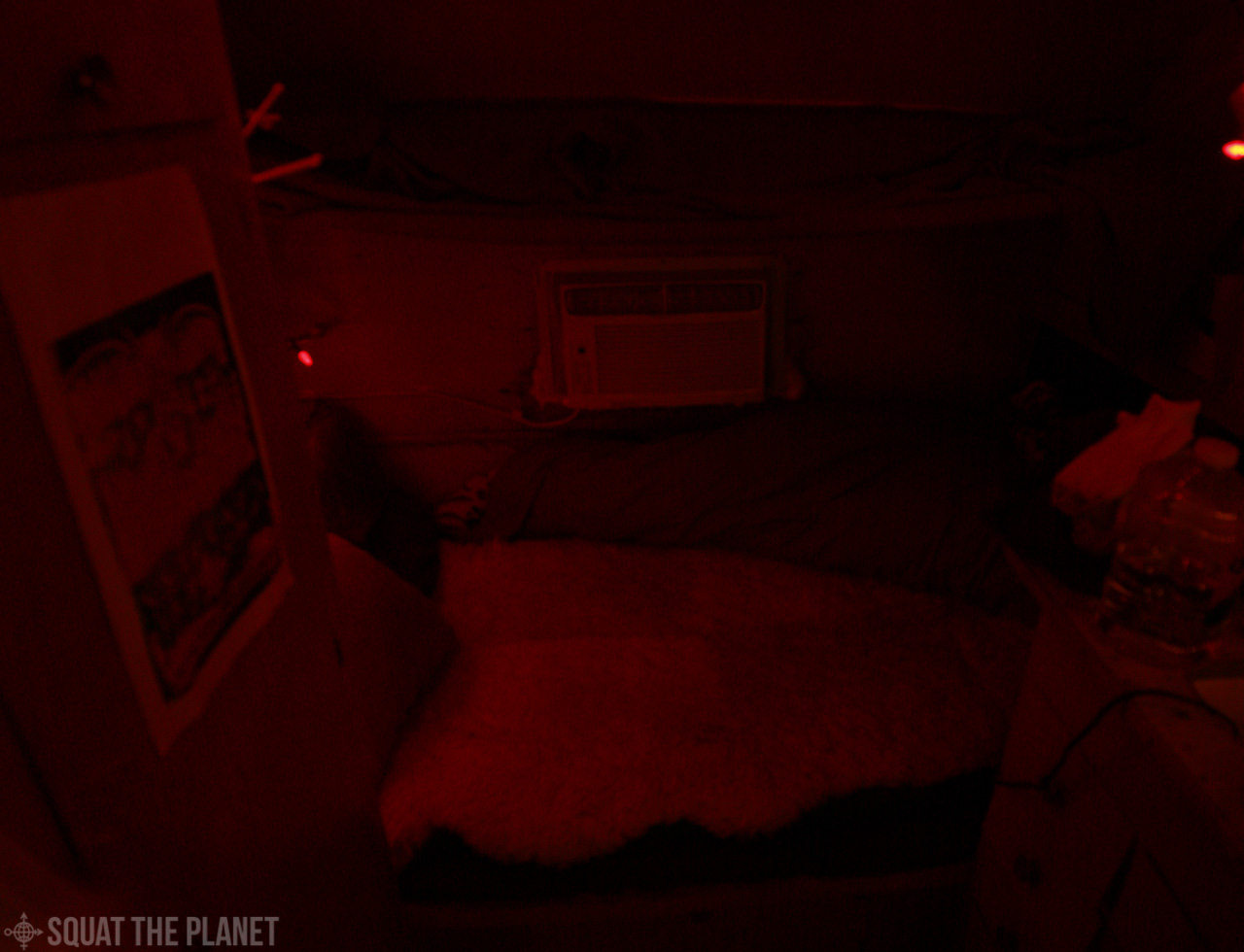 This is where I lived for my first month at East Jesus.

So that’s where I came in. Kat Bastard and Penny were the unofficial caretakers of East Jesus. Kat and I were good friends, and he wanted me to come live at East Jesus and help out with the projects there. My first morning at East Jesus I woke up in a city transit bus buried a quarter deep into the desert sand. It was a former band tour bus, fully converted into a living space with bedrooms, and it was my top pick for a place to call my own. For the next month I woke up every morning with the sun beaming through the window like a natural alarm clock, and enjoying the peace that was a squatter town in the desert.


It wasn’t until Kat’s birthday that things started to get a little more exciting. Kat decided that he wanted to burn the rest of the Mercedes-Benz that was sitting in the art garden in celebration of his birthday. The car’s trunk had been used for several other “Car-BQs” before, but this would be the first time we burned the whole thing at once. It was one of the biggest fires I’ve ever been witness to, and the heat was almost unbearable at even twenty feet away.

It’s at this point that the rest of the night gets a little hazy. After drinking a lot of Captain Morgan’s rum, everyone else went to bed except Vince, a few of his friends, and myself. Together went far out into the desert with a few of Vince’s shotguns. It was a strange, yet “bad ass” feeling going out into the night with a shotgun on my back and a bandolier of shells around my chest.

Anna would tell me the next morning that it was a little disconcerting hearing random gunshots for hours into the night, but that her fears were abated by the echo of my cackling laughter in between shots. It was by far the most drunk I’ve gotten in a while, and it was a hell of a night that left me hurting like hell in the morning.


A few days later, Penny came running into East Jesus asking me for my video camera. It seems that someone was giving people free rides on his ultralight airplane around Slab City. You can check out my post about it, but in short it was one of the most thrilling fifteen minutes of my life, and definitely an experience I never expected to have in The Slabs. Check that off the bucket list…

The next 2-3 weeks were a mess of drama. Here’s the short version: A carload of Kat’s female friends came over to East Jesus from Tucson, AZ. I think this made all the guys more than a little excited since, well, let’s be honest, there’s not a lot of attractive women in the Slabs. After a few nights of heavy drinking I ended up sleeping with a girl who apparently had a husband, but didn’t find that out until the next morning, which made for a pretty awkward few days until we eventually talked it out, and left feeling a lot better about the whole situation. Kat slept with two girls in the group, and his wife Penny got pretty upset despite their sudo-polyamorous status, and her attempts to sleep with me that same night. Overall it was quite the week of infidelity. Penny took off for a few days and no one was sure if she would be coming back. When she did eventually return, we all woke up to the two of them arguing. At some point in the argument Kat hit her, so she called the cops, and Kat was arrested for domestic violence.

This was the end of yet another of East Jesus’ caretakers. It seems that East Jesus had a track record of bad people taking care of the place. One had ruined a $2,500 battery that was part of the solar panel system, and another had taken money from the East Jesus fund. Kat, I would soon discover, would be far worse.

While he was in jail, we discovered that he had not only been taking money from the East Jesus fund, but also sold a generator that wasn’t his, and the iPad he had obtained in a “really good trade” was stolen. In addition to that he set up a trade for another tablet computer in exchange for iPad and when he received the tablet, he stiffed the guy who sent it and sold the iPad to someone else on eBay. I was too disappointed in him to be mad. I had considered him to be someone I could trust, and was in the process of handing him over the keys to one of my biggest projects in life, Squat the Planet. Now… I didn’t know what to think. 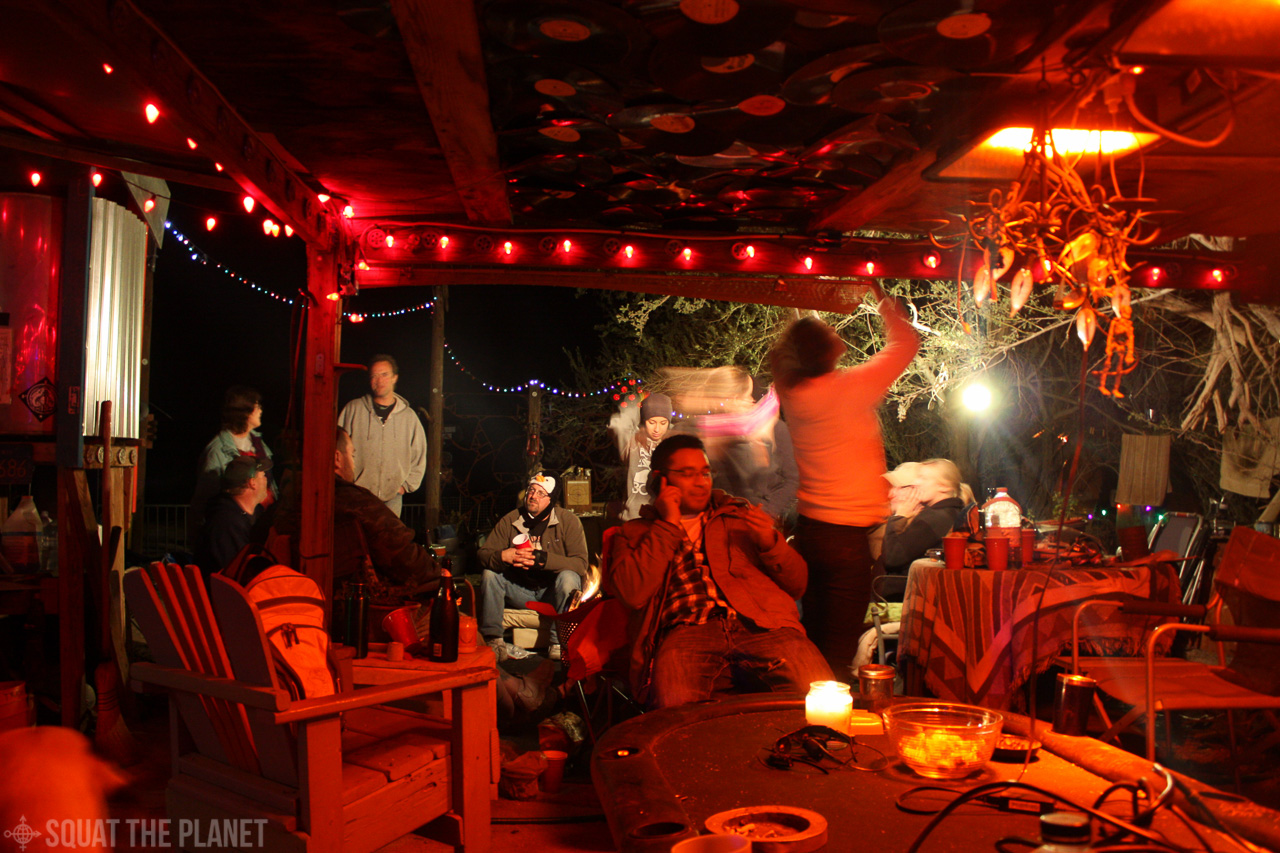 Fortunately, these events led to a radical change in the East Jesus community. In Kat’s absence, the other members came together in a way I had never seen before. Without a “leader”, the community just automatically came together and did what needed to be done, and it worked. The vibe of the space changed in such a positive way that it was like night and day. Suddenly everyone was hanging out with each other; progress on projects increased a hundred fold; everyone was smiling; and no one person was responsible for Charlie’s vision. It was the kind of rare, organized chaos that has always made me a believer in anarchism, and East Jesus has been better for it ever since. 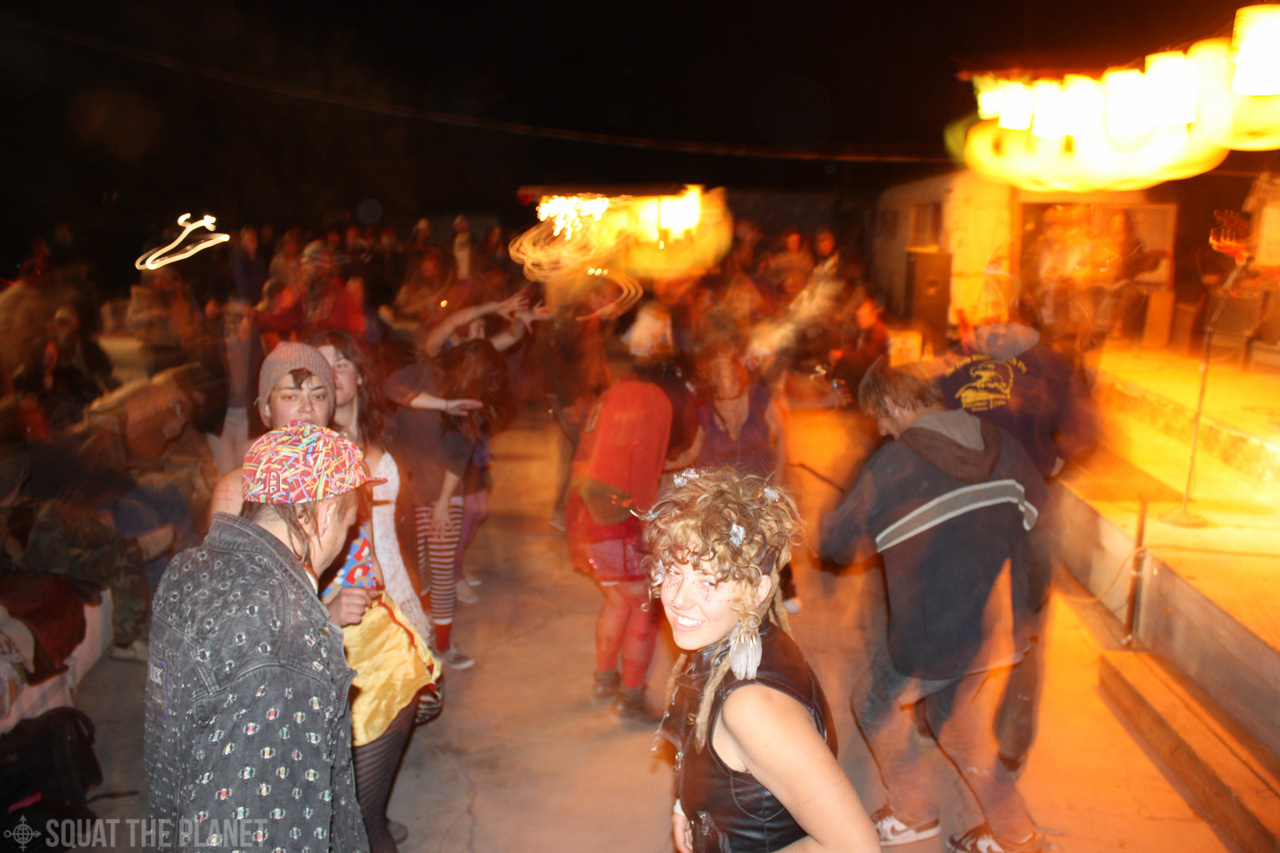 New Year’s Eve was the first celebration since Kat’s ousting. East Jesus no longer had that “punk house” feel, but was still ready to party like crazy in what I would imagine would be more along Charlie Russel’s style. I spent the night wandering between EJ, playing the asshole song at The Range, and Moth’s place, Damnation Tank. The SPAZ kids were throwing their yearly rave out there, but when we got there just before midnight, it seemed a little tame, so we wandered back through the desert to finish our night off back at The Range.

Charlie’s birthday was a week later. It was a night celebrating Charlie’s life and the space he created, and I learned a lot about him as we watched documentaries about him and East Jesus made by his friends. We drank Charlie’s signature Chocolate Martinis, a drink that I fully expected to be vile, but instead was a chocolatey alcoholic drink complete with a cocoa salt rim that was pretty amazing. Finally, I really got a chance to meet the people in Charlie’s life and extended friend circle. It made for a hell of a night that left me with new friends, and my head pounding the next morning.

All in all, it was a month that would be a good beginning to 2012, the “last year ever.” I’m sure looking forward to the rest of it.

Matt Derrick
Hey, I'm Matt Derrick, the founder of Squat the Planet. If you're reading this, you obviously want to know more about me, so here we go: So if you haven't guessed from seeing this website, I'm a big computer geek / gamer, but I like to do other...
View all 28 featured items
You must log in or register to reply here.
Similar threads
13 Cops, 13 Guns
Wyoming cops pointing guns, Freemasons, and Serendipity.
Be safe riding flat cars with trailers.
Car Cruising Mini Adventure from Mid 1980's.
A car accident...in rural Tanzania
Stuck in the mud
You bought a car for 2 euro's?
Ever been fired for lack of housing?
Photos Flint and steel fire set
Hitchhiking in the land of ice and fire... in January
Share:
Facebook Twitter Reddit Pinterest Tumblr WhatsApp Email Link