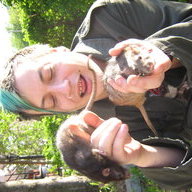 On Thursday, May 11, residents at 2620/2622 West Cermak Rd. woke up to six cops breaking down their door and ordering them onto the ground. Walking behind them was Steve Mallon, a property manager for Barnett Capital, a $200 million finance entity that claims to own the building along with other large holdings in the neighborhood. As our friends were being handcuffed, Mallon contemptuously stepped over their necks as if they were trash. This was the climax of a week-long attempt by Barnett to evict residents using strong-arm tactics.

Since buying the former homeless shelter and apartment building, Barnett Capital has made repeated violent attempts at driving out its inhabitants. As a result, we brought new life to the building as a haven for people in the community who are facing displacement and eviction. We have worked to transform the building into a multi-generational space that is home to people of many identities and backgrounds, in hopes of addressing some fundamental questions about the enduring legacies of colonialism and how we can change the way we relate to the land we live on.

As “an alternative investment firm focusing in real estate, asset-based financing, and equipment leasing”, Barnett Capital is one of the driving forces in the racist process of gentrification currently facing the working-class communities of Little Village, Pilsen, and North Lawndale. Their intent is to carry out mass evictions so that they can demolish or redevelop to make room for luxury condos. Therefore, our fight to keep the building is a fight against the daily colonization of urban space and the social dismemberment of our communities.

Barnett Capital initiated their eviction efforts on April 19, when they attempted to execute the first in a series of lockouts. Without bothering to give the legally obligated 48-hour notice, the company waited until they thought everyone was out of the building to change the locks. As a result, one of our elders was unable to access her medication for hours. Despite their flagrant abuse, we assumed that the company would get in touch with us and serve us eviction notices.

This never happened. Instead, on May 9, Steve Mallon and his goons attempted to push residents out using harassment and brute force. They arrived at 7:00 am with a dumpster and began breaking down doors with crowbars and sledgehammers, smashing residents’ belongings, removing banisters to impede elderly and disabled residents from returning to their units, and cutting electric wires to make apartments appear vacant. The cops, who are obligated in Chicago to prevent illegal evictions, stood by in their defense.

They returned the next morning like clockwork, breaking into one of the units, throwing out the belongings of people who were at work, and drilling pieces of plywood over several doors. They also broke keys in the doorknobs of three apartments with people inside, making it impossible for anyone to enter or exit.

The following day, cops broke into one of our apartments without a warrant and arrested five people. Immediately, community members flocked to defend the building against further attacks; dropping banners, barricading doors and passing out flyers to inform neighbors about the ongoing assault.

This experience has left us with physical and psychological trauma. We have suffered from cuts, bruises, swollen limbs, exacerbated chronic illnesses, pneumonia, and PTSD after being attacked by cops and corporate-employed goons.

Despite the intimidation, we feel a sense of power in defending our home, strengthened by the dozens of comrades who have answered our call and joined in the standoff against Barnett. We are continuing to resist daily attacks while struggling to fortify against invasion. This means constantly replacing door knobs and locks, repairing and replacing smashed doors, and barricading vulnerable units, all while working to ensure that everyone has a safe place to sleep and that no one is left alone.

In addition to dreaming of one day getting wifi and unclogging the upstairs toilet, we want to continue building our rooftop garden, running our social center, creating a community tool library, starting a book club, and making our home into an open space for creation and movement-building.

Our self-defense will use all available means to push back, undermine, delegitimize, block and counteract the moves of the landlords – from physical refusal to legal counteraction. We are forcing Barnett Capital into litigation not because we believe the law is an instrument of liberation but because we know that gentrifying developers and landlords prefer to bypass the legal process; relying instead on the more convenient tactics of goon intimidation, harassment and police violence. They want us gone in the fastest, cheapest way possible. We are ready to fight back. We are and will continue to defend our home.

Land baron: "Get off of my land you squatters."

Squatters: "How did you come to 'own' this land?"

Land baron: "I got it from my father."

Squatters: "And where did he get it from?"

Land baron: "From his father."

Squatters: "And where did he get it?"

Land baron: "From his father."

Squatters: "And where did he get it from?"

Land baron: "He fought for it."

Squatters: "Ok, we'll fight you for it."

Makes sense. Chicago is turning into something horrid. Thanks for posting the article, it's a great read.
OP

Chicago: Drop the Charges on The Swamp 5

Partial excerpt from the link above:

Today (May11), five of our friends were arrested in an illegal eviction carried out by the Chicago Police Department under orders from management company Barnett Capital, “an alternative investment firm focusing in real estate, asset-based financing, and equipment leasing”. Barnett Capital is one of the main driving forces in the process of displacement and gentrification currently facing the Black & Brown communities of Little Village and Lawndale.

Please help our friends who were arrested today and demand that Barnett Capital drop the charges immediately, stop the intimidation, harassement, and illegal evictions taking place at our home @ 2620-2622 West Cermak Road.

Our home, affectionately known to some as Swamp 9 / The Compound / Texas, is a haven and safer place for people in the community who have faced chronic homelessness and eviction- a multi generetional campaign that is home to people of many identities and backgrounds who continue asking some fundamental questions about the enduring legacies of colonialism: who’s land are we on and how can we change the way we relate to the land we occupy?

Please call the building managers and ask for building Leslie Pohren or Steve Mallon at Barnett Capital at 224-205-7266 or 847-656-1104 and stand with us in solidarity against the lords of the land. A sample script of what you can say reads:

“Hello, my name is_______________, a community member and supporter of the tenents of the building at 2622-2620 West Cermak Road in Chicago. Your company is engaging in illegal lock outs, illegal evictions, and illegal damage to the property of legal tenants. Their legal team has made numerous attempts to solve this housing issue in a legal and civil manner whereas your company has done the complete opposite. Our community supports these tenents and the law supports them. Stop the harassment, stop stealing their belongings, and stop this illegal process.”

Initial conversations with our legal team and legal representatives from Barnett Capital agreed to a quiet and peaceful resolution to the civil housing issues unfolding at 2622-2620 West Cermak on or around May 4th, 2017. While we as tenents have been forthcoming and communicative with Barnett Capital (through our legal representatives), Barnett Capital now refuses to communicate with us or our attorneys, instead engaging in a process of intimidation, illegal lockouts, and illegaly cutting off electric service to certain units- all in an effort to intimidate us into leaving our homes to make way for their luxury condos.

Not this time. We will defend & take back the land.