We never did eat that duck. (1 Viewer) 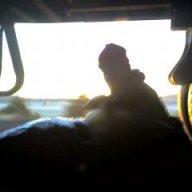 "This is our train!" Jarred said excitedly as he clapped his phone closed. Calling in the number confirmed it was headed to Roseville. We had been waiting at the north Albina yard since 4 that afternoon, watching the yard dog unit push lumber around. We loaded our packs on a scrambled down the steep slope, north of the overpass. Watching the cars roll by on the short string we counted 4 open boxcars and a couple canadian grainers-pop cans. It rolled on by. Jarred motioned for me to follow him and we began running back up the hill. I kept up best I could, with my still-healing-from-sprain-knee and all. We jumped over the overpass and started jogging down the road parallel with the tracks. Damn I'm out of shape, after the half mile or so it hurt to breath. Probably something to do with my recently acquired smoking habit. We stopped next to the nearest pop can. "This one!" Jarred gasped. We waited for cars to disappear from the road and hopped into the shallow ditch. I crouched as he threw our packs onto the porch and a few more cars passed. We climbed up, shoved our things in, and then ourselves. "Wait, is there anyone in the yard?" I poked my head out; not a soul.
The grainer hole was cramped but comfy, and I would later learn-relatively warm. The connections started clicking, the sound reverberating through the metal into our compartment. "Here we go." Jarred whispered. This was it, my first freight ride. The train came to life, slowly creeping forward, picking up modest speed. We passed under the steel bridge and I cautiously peered out, watching streets pass. There went the house on Division that hosted my friends band last weekend. Factory buildings gave way to open land, the valley basin, flat, rolling alongside the freeway. I arranged my various bedding like materials and somehow fell asleep inside that rattling, screeching, dinosaur-noise-making metal shell.

The train slowed down. Jarred woke me, saying something vague about switching our current junk train for an IM. I got my stuff packed and we slipped out, running away from the train, over the road and up to the side of an overpass. I didn't like this. I watched despondently as the train pulled away. Why wait, at least for some hours, for something fast when we had a perfectly good spot on a train already? We started walking towards town, my irritation growing untill, after probably a mile down the Expressway I stopped. "Let's check the crewchange." I pulled mine out of it's secret compartment in my pack and looked up the Eugene page. "The hop out spot is where we just hopped in." I sighed. We marched back in the opposite direction, back to where we started. We got to the jungle on the north side of the big pond. At the intersection just above this area, a female mallard had somehow been struck by a car since we last passed. It's mate stood next to the carcass. Poor duck.
As we napped lightly in the trees someone pulled over and tossed the body into the blackberries next to the road. A couple hours of sleep and Jarred fiddled with a small radio he found on his side of the grainer hole. The sun crept into the sky and I decided to get out what was on my mind: "Do you wanna try hitching out of here?" A radical approach, but I was feeling more and more desperate about getting south. "If you want to hitch, I'll hitch with you." He said, and we took off. More walking, and buses, and then more walking. I was begging to get why alot of travelers I know don't like Eugene. I had only experienced it before, and just the Whitaker neighborhood, and just at night with a friendly bar crowd. These daytime residents didn't seem so nice-busy suburbanites and snobby college students. We walked from one I-5 on ramp to the next with our thumbs out, collapsing on the grass next to the shell station and thinking our situation over. I was done, I didn't care anymore. "I don't know if you're that superstitious or anything," announced Jarred "but there's this thing called the brakeman's curse. It basically means right after you've ridden a train, it's really, really hard to get a ride hitching." I'm not really superstitious, I've eaten a few bananas at sea, but this made sense to me right then and there. "Okay, let's go wait for a train."
Back at the jungle, I picked through the bushes, looking for the duck. I found it and inspected it. "Are you going to pluck the whole thing?" Jarred asked as I plopped it down next to my pack. "Naw, I'll just breast it out and cook the pieces over a small fire, when the sun goes down so the smoke isn't so visible." It was still plenty light out, but I decided to do the prep work of plucking the breast area. Taking it away from the main camp area so as to not spread feathers all over the place and possibly incur hassle from fish and game or some other law enforcement body, I was showing the difference between down feathers and regular feathers when a sound came from the north; train whistle.
As the unit Pulled up we called it in. Another junk, destined for Roseville. A couple more pop cans and a very inviting open boxcar. We stood on the opposite side of the road, staring hungrily at it. I was so fucking ready to get the fuck out of Eugene, fuck it if we were in broad daylight, next to a busy road. Jarred had more sense than this. "No way, it's too busy." He said firmly. I continued to stare at the open boxcar like it was a free steak dinner as it rolled away. I laid down in the grass again. My traveling partner went and dumpstered a good stack of bread pieces from a nearby bakery. We ate and I considered finally cooking the duck, but instead went back to sleep.

"George!" I woke suddenly to Jarred sitting up and looking at the tracks with wide eyes. "That's our high priority!" He announced. The sun had just set. In quick order we packed our stuff up once again, leaving the bread pieces on the ground behind us. The train was a string of piggybacks, a type of car I had not studied. We shoved our packs over the axles and curled up in the tight spaces behind the tires. The train set out and my head was in a flurry of thought. This is insane. We're too exposed. This is too cold. What the fuck have I gotten myself into? What if I suddenly become claustrophobic. I watched the ballast rush by underneath me through the gap I was laying over. I felt indigestion rise and thought about puking through the gap. I watched as we passed by The Wandering Goat and the grain depot.
When we were clear of most of the city we crawled out from under the axles and arranged our sleeping bags. I lay my head on my wool blanket and tried my best to sleep with the chilling breeze filtering into my sleeping bag. At one point I looked out to find we were along a wide, starlit stretch of the river, a beautiful site, the silhouettes of trees and lights of boats on the water. Then FOOM! We entered the first of many tunnels. Utter darkness. I laid my head back down and somehow managed to find sleep.
I woke up some hours later and peered at the world outside my bag. Somehow it had gotten even colder. All around through the trees, snow covered the ground. Fuck! Not snow, not now, not after I'd spent the winter in Weed working a job where I dealt with snow every fucking day. I shivered and thrust my hands into the inside of my jacket to warm them back up. I looked over at Jarred's outline on the other side of the platform and had a sudden worried thought about pulling into Kfalls and finding him succumb to hypothermia. I put the image out of mind and retreated back into my nylon and down shelter.
We stopped just north of the Klamath yard and waited for an hour or so. We both crawled, very much alive, up to the underside of the axles once again. slept somehow found me again and we moved through the yard unhindered. The sun was on the horizon.

Jarred and I shared a smile and scooted back to our positions behind the tires. "You've got a hole in your bag!" He shouted. I looked down and saw that something sharp on the underside of the trailer had ripped an L shaped hole in my sleeping bag. Clumps of white down fluttered out, lost to the wind. "Shit!" I grabbed at the hole and Jarred gave me a pin from his hat. I twisted the fabric up and pinned the gap shut best as I could. No use worrying about it now, we were almost home free. I defended myself from the cold, high altitude winds and counted down the mileposts. When we got close to MLP 345-The Black Butte Center for Railroad Culture, Where friends were and many a fun winter night had been spent. I thought about how special it would be if somehow the train stopped at the siding there and we could just disembark on friendly ground. No such luck. I rolled up my injured bag and hid under the greasy axles one more time as we crept through Mount Shasta City and then Dunsmuir. Coming to a stop right at a road that would take us right to main street, we jumped off and I hopped around, stretching my stiff legs. We made it, by god, we made it. 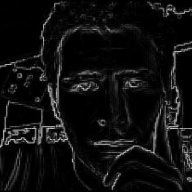 haha must have been kickin yourself for hoppin off that GM. Would have been nice n cozy indoors... Glad you made it safe n all though.
You must log in or register to reply here.