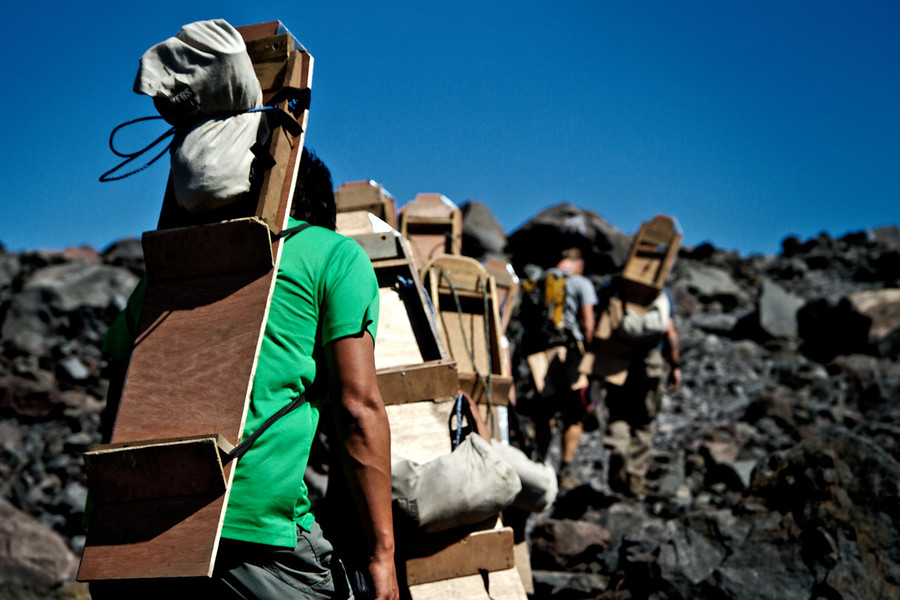 Marching Up the Volcano

LEON, NICARAGUA
Racing down an active volcano at 30 mph on a little piece of wood is really fun! But volcano boarding can also be a bit dangerous, as I was about to find out.

Crashing into sharp volcanic rocks at that speed will leave a mark (or ten).

Cerro Negro (Black Hill) is an active volcano outside of Leon, Nicaragua. It’s a relatively new one at only 161 years old. Because the cone is primarily made up of small penny-sized grains of volcanic rock, it’s possible to ride or surf down the steep slope on a wooden sled.

Hiking The Volcano
To start this adventure, we strapped boards to our backs and began to ascend the 2388 ft. (728 m) black mountain of loose rock. The hike up lasts about 45 minutes.

The day was extremely windy which made for a refreshing hike without too much sweating on this black natural oven. But when we approached the top the wind became TOO strong!

Our boards began acting like sails, the wind pushing us all over the place like rag-dolls. The whole group had to hit the deck to avoid getting swept off the top all together.

I’ve never felt so much wind before!

After several minutes hugging the ground, the gusts finally died down and we were able to continue to the “drop zone“. 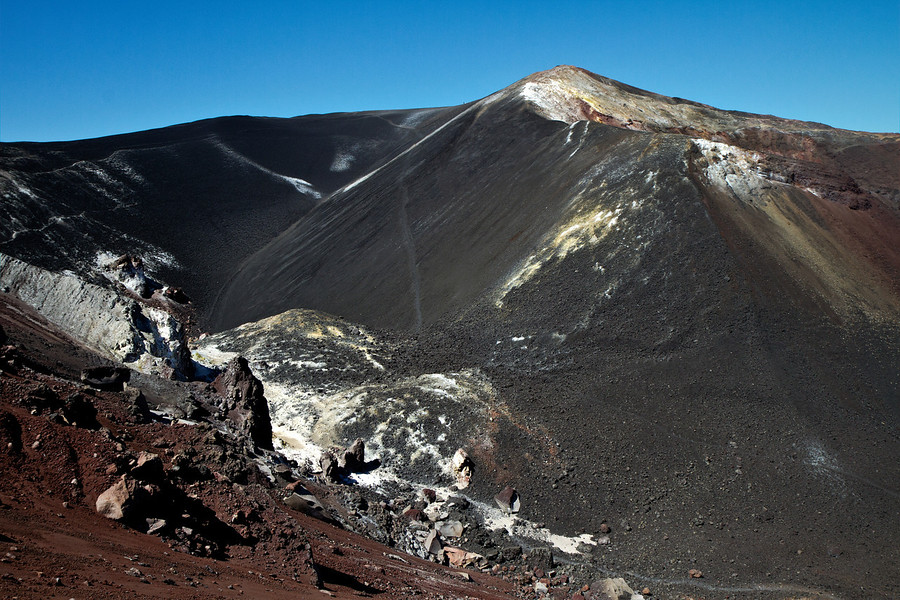 Volcano Boarding For Dummies
There are two different ways to go volcano boarding. You can stand up like on a snowboard, or you can sit down like on a sled.

Standing up may look cooler for photos, but in reality it actually sucks.

You can’t make turns like on a snowboard and you move slower than if you ride it like a sled.

At one point I tried to stand up on the board for a bit, but it was not nearly as fun. When sitting down, your center of gravity is lower and concentrated on the back of the board, creating less friction with the ground and resulting in more speed.

Volcanic rocks are not as slippery as snowflakes, there’s a lot more friction to deal with. 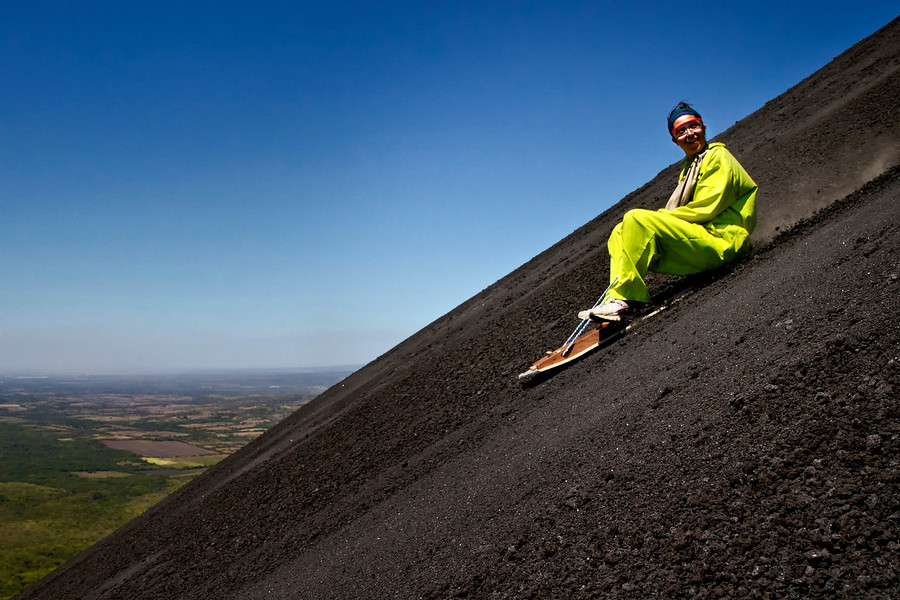 See You at the Bottom!

Wooden Sled Construction
The volcano boards have a rope in front for your hands as you lean back for maximum speed. You can’t really control your direction with the rope though, it’s only for stability. The bottom of the wooden sled is covered with a thin layer of metal.

There is also a piece of formica plastic glued to the metal which reduces even more friction and gives you extra speed. This plastic needs to be replaced every day, as it burns right off after 1 or 2 runs.

Everyone is given a one-piece suit for crash protection. You also get protective googles and leather work gloves for the same purpose.

While the volcanic stones are very lightweight and easy to break apart, they are also very sharp. They can tear holes in clothing or skin pretty easily without the protective gear. 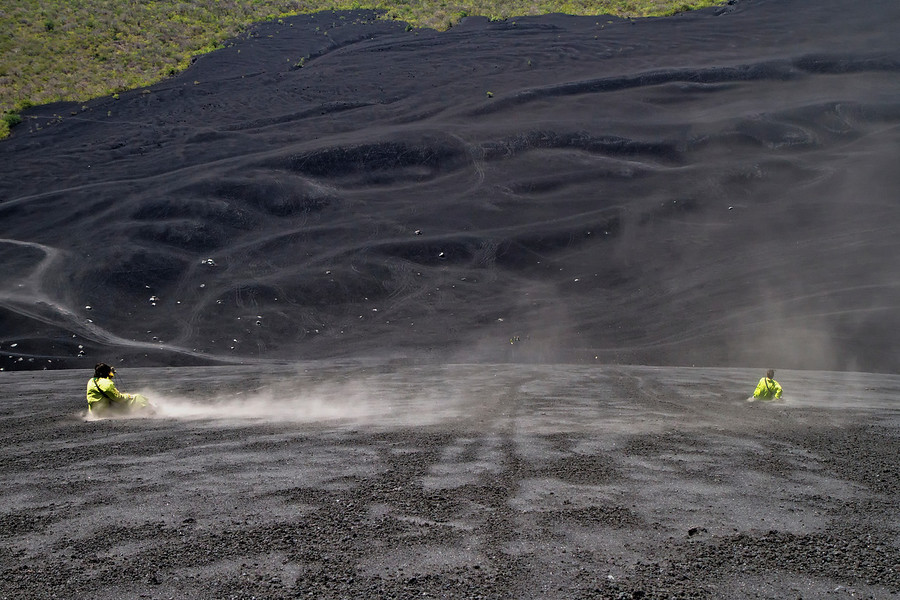 The Need for Speed!
The slope you ride down is much steeper and longer than you first imagine. In fact it’s quite intimidating.

Of course it doesn’t need to be that scary, because you’re always able to put your feet down and control your speed at any time.

But I was on a mission to go as fast as humanly possible!

So after mentally preparing myself, I sat on my board, grabbed the rope, leaned way back, and off I went!

Starting slowly but quickly building speed as the slope reached a steep 41 degrees. Volcanic pebbles were kicked up into my face. I didn’t feel any pain though, due to the adrenaline rush of speeding down the side of a volcano!

The world became a blur as my volcano sled raced down the mountainside.

But then I lost control…

The volcano board started to turn sideways on me, and to compensate I finally put a foot down. Big mistake! I was going too fast at that point, and when my foot hit the ground I launched forward and sideways, slamming into the rocks face-first. 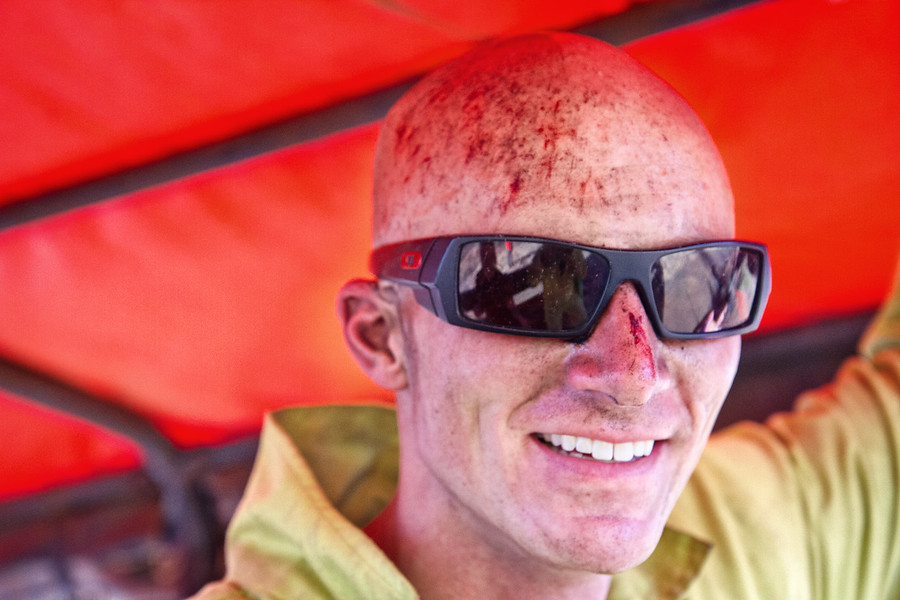 The Crash
Volcanic rock is not as forgiving as snow or sand. I found this out the hardway. When I finally stopped rolling down the slope, I realized my bald head felt hot & wet. Was that blood running down my scalp?

I checked to make sure all my parts were still working, located my board, and continued racing down the mountain. I was fine, just a bit more dirty and bloody then when I’d started this crazy adventure.

At the bottom we walked back to the truck and ate Volcano Burritos that had been freshly cooked inside the volcano itself! A hole had been dug at the summit, and a metal box containing the food was buried there. The heat from the volcano had cooked the burritos.

Now it was time to hike back up and do it all over again. ★

More Information
Location: León, Nicaragua [Map]
Company: Quetzaltrekkers Nicaragua
Cost: $30 US (all profits donated to charity)
Useful Notes: Even though I crashed, you don’t have to. It’s easy to keep your feet down to control your speed for the whole descent. If you do decide to go fast, dragging your hand is a better way to slow down in a controlled fashion… Lean back as far as you can if you want speed!

God, if only I was still young carefree and not aware of mortality.

Back in my youth, I'd have been all over this type of thing!

There is something familiar about this.

Think I've done it before.

LOL @Odin!! And to @MolotovMocktail - oh hell no!!!! That would never be a part of my bucket list hehe. I have too many marks and healed ribs and stuff from the wilder days hanging with a bunch of guys on my mtb. But doooo take pics though

This thread needs a bump... I am amused.

MolotovMocktail said:
While the volcanic stones are very lightweight and easy to break apart, they are also very sharp. They can tear holes in clothing or skin pretty easily without the protective gear.
Click to expand...

I wonder if this is mostly sand made up of obsidian like pumice? Broken up pyroclastic deposits. lol...
yay... a glossary.
http://volcanoes.usgs.gov/vsc/glossary.html
You must log in or register to reply here.

Travel Stories Jan 2, 2020
scumplucker
I hopped freights, hitched, bicycled and squated North America for 6 years, now I am off the road and living in ATX.