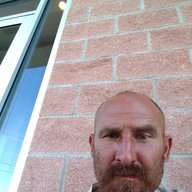 Waking up this morning was hard on me. I had slept half the night behind a side of a strip mall which didn't seem the local Leo's were to Keen to be watching, only to wake shivering as these drier climates have no mercy as they can be hot as hell in the daytime but cold as an iceberg before the sun rises. Upon waking I made my way down the road, finally catching some more necessary shut-eye in a cardboard box located behind a warehouse that appeared to not be in use.

Several hours passed, and once feeling perky again, I opened my box to the Ray's of the sun, fetched my belongings and started to rubber-stamping once more. Plaguing my mind was finding a place to safely start a fire without rousing the fears of the general public within the vicinity, as I had food, but I was only going to be able to eat it after it had been cooked in my handy 8 inch wide cooking pot which I always hang by my side. Grits cook in about 8 minutes, which toward the end I was planning to throw three spoonfuls of peanut butter in along with just a dash of garlic I carry in my bag. Might not sound thrilling, but it fills my belly good.

Another hour passes and I had not seen anyplace suitable to commence making breakfast. The local traffic seemed threatening at every stoplight causing me to feel more uneasy about the travels ahead the interstate I was making.

One gas station I came upon I started getting desperate, and not to my liking but out of a will to survive, I started eye-balling what people had thrown away, hoping to see an unopened package, even an unopened ketchup packet would suffice. A local worker noticed, proceeded to call me, and at first I thought to continue walking away, thinking I was about to be scolded.

He continued calling "sir... Sir!" I decided to turn back around, knowing my behavior was disgusting. I knew damn well that what I was doing nowadays is nasty as hell. He didn't reprimand me though. Instead he kicked me down a couple of egg potato burritos and a bottle of water. Not only did this blessing get passed down, but he gave me a brotherly hug and told me keep moving, which I understood meaning don't give up, and I did not hesitate.

At a local grocery store, I was more than ready to pull off to replenish carbs and honor their request. I got me a bag of rice, a bag of pintos, and some barbeque sauce. All I needed now was a spot to cook.

Off behind the store there was some woods that looked suitable. I saw some dry wood along with a patch of ground that had no brush around it so I prepped it for fire. At a donut shop besides my location, I gathered water from a well, first one I had seen in a longtime.

Making a fire is easy, but I have a rule to always have water at hand to put it out. I broke some bigger logs from the dead timber I'd gathered, then broke off the twigs to put underneath it. Final step, tinder which I found in the form of thin dried out vines I mashed up to form a lil bit of tumbleweed. Light a scrap piece of paper, after noting wind direction for safety, I put it underneath the tumbleweed. It blazed, then the smaller twigs caught, then the bigger logs started burning.

I waited for some coals to form up and went to town cooking a rice beans soup, throwing in the barbeque sauce towards the end to finish off.

I put out the fire whilst eating my food. When I was done I made one last check of the fire to be certain it was out, then scurried down the road.

My bag was in dismal shape and I made plans to stop off at a Wal-Mart down the way. Being homeless as I am is a prime time to learn new skills, so I figured to maybe grab some sewing equipment to try my hand at it. Upon seeing the prices in Wally world though, my eyes quickly went to a quicker remedy, that being safety pins. Definitely saved me the trouble of acting like an unprofessional seamstress, a skill of which I possess nil.

Walking along in the dry heat can wear you down. I happened upon another intersection and my eyes were graced to see an unopened caffeinated Monster drink staring back at me. I thought maybe somebody may be on one of the corners flying a sign or something, so I looked around but the only thing I saw was the traffic passing by. I waited a 5 minutes, just to be certain. Then I decided the poor thing had gotten left behind by it's original owner, so I had to see it didn't go to waste.

We got a great thing going with STP. A place to get away from the bull this world tends to throw on us vagabonds. Then again we are all in this together, no matter how much we see different from those with a residence, and there's a lot of good people out there.

Once I get a lil more dough, I'm going to try and put it back into the coffers of this great site and support the burrito fund. Almost to Austin, but my feet need rest. To everyone out there in STP land, stay safe, have a great night, I'm going to find a place to wash my ass so hopefully the bed bugs won't bite... Peace.

Thanks for sharing man, you write well, you should post more of your stories! Also I'm in Austin, so when you make it here let me know and I'll buy you lunch!

Matt Derrick said:
Thanks for sharing man, you write well, you should post more of your stories! Also I'm in Austin, so when you make it here let me know and I'll buy you lunch!
Click to expand...

Heritage hills, I tried to wash yesterday but I got on same dirty clothes, so I probably immune to my stench... You ain't got to buddy, but it be cool... No matter what I'll be here for a minute... bout to head downtown, checking out scenery.
You must log in or register to reply here.