Y'all. I had hope for the cause. I am losing hope rapidly.

Boris Johnson has just won the majority parliament in the UK, once again. This will mark the majority of the Allied Forces falling, after 75 years since WW2, into Nationalism.

The entire reason why the UN was established after WW2, was to ensure this would not happen. To ensure that our countries would work together to prevent anything like the Thrid Reich, Second Reich, or First Reich to ever happen again.

They worked together to prevent any single idea from oppressing the world ever again.

What the fuck. I was worried before. Now I'm scared. If Trump Gets elected again. That's it.

I know there is naysayers out there, but seriously, do your research on history. This should scare you. Between Trump, Johnson, Macron, Erduan, Bolsonaro, Putin, Xing Ping...Satan help us all. 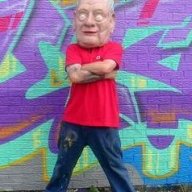 UK here and i know theres a couple of other UK members on here.
My take for wtf its worth - The Brexit issue won it for Johnson plus the fact that Corbyn is a real love or hate kinda guy with the UK people,many see him as what we know as 'the loony left'...perhaps a more moderate candidate would have helped?
I'm from a Labour family/area but this Labour were a bit of a shit show tbh.

BREXIT..its been sold to people as 'regaining sovereignty' from evil EU overlords,fed the masses the line 'take back control'....dumb motherfuckers have bought it big time..like us little people will be taking back control HAHAHA.Control for the Conservative elites,the privileged few and their banking buddies more like.Control for the Conservatives to run amuck.
It's gonna be fun watching the little people realise theyve been gaslighted in the coming months.

Ya, I've been listening to some pretty intense programs on this, and have learned alot. It sounds like the labour party really fucked this one up. It's pretty much what happened with Trump over here in 2016.

Soon they will see what Brexit holds in store for them. What a shit show, poor Northern Ireland and Scorland. Anyone that sells Nationalism is NOT a friend of the people.
You must log in or register to reply here.
Similar threads
Presidential Election '08
who wants to bet on the presidential election?
Share:
Facebook Twitter Reddit Pinterest Tumblr WhatsApp Email Link