The History of Playing The Spoons - SPOONOLOGY (1 Viewer) 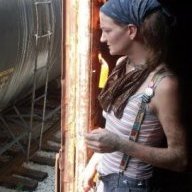 SPOONOLOGY - The History of Spoon Playing

In America people usually associate the playing of spoons with the image of an old man on his front porch slapping a pair of spoons between his knee and his hand. Although this mental image is not completely inaccurate, there is much more to spoon playing than that. Another image that folks seem to attribute to spoon players is that of the guy or gal picking up a pair of spoons from behind the bar or from the kitchen cabinet to play along with the band playing at a venue or a house show, and butchering the timing and rhythm. That being said, please note that when given the right amount of respect and practice, spoons can actually become a complex rhythm instrument that compliments the music. Practice makes perfect.

There have been spoon players since before written history. Prehistoric rock drawings and pottery as early as the 4th millennium depict dancing figures with curved blades in their hands. Spoons belong to a class of instrument called concussion idiophone. This general class of instruments includes the oldest instruments known to man. Spoons themselves are prehistoric, and you can say that there have been spoon players since around the invention of the spoon.

Many ancient cultures played spoons. Ancient Egyptians, Greeks, and Romans all played spoons and a variation of the spoons called the rattle bones or the rhythm bones. Rhythm bones are essentially a pair or set of three bones, usually sheep and cattle bones, placed in the hand parallel to the palm with the convex sides facing each other. The bones are placed between each finger, with one finger being used like a hinge, and the moving one's wrist so that in such a way that the bones hit each other. Egyptians, Greeks and Romans all played spoons and bones in their battle marches and some even speculate that human bones were used. During the crusades, when these armies were marching the clicking or the bones and spoons meant to their enemy that "the pagans were coming" and it was time to prepare for battle, or to even run and hide.

Spoons play a part in many different cultures. The Irish, French-Canadian, Turkish, Russian and Vietnamese all played spoons as a part of their traditional music heritage. In America spoons are associated with minstrels, jug bands, and folk music.

Notable spoon players are Artis the Spoonman, Sam Spoons, Deb "Spoons" Perry, David Holt, and Tran Quang Hai. Keeping these ancient art forms is important to not only our own culture, but to the world. The playing of spoons is keeping these ancient traditions alive, and forming new ones.

A story about a band.