I just wanted to share a few pictures of my cat on the road. He's 7 years old and at first I wasn't expecting him to take to the road as well as he did, but animals are just full of surprises when you give them a chance. He's adapting nicely to van life and after our first week driving down the coast of Oregon/California, I learned better how to approach life with a cat. The questions and looks we get from people have been fun. Rocky seems to be really enjoying it and he's never slept better. He snores with content now, which is something I don't remember him doing before! XD

ha yes he looks like a majestic panther in its natural terrain!

only met 3 kids with cats on the road!
always a sight to be hold though.

safe travels to ya both! 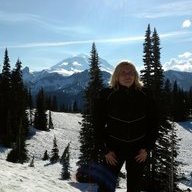 My cat has also made a couple 5 state car trips. Last month we picked up a new stray and they are the best of friends. Next week we make another multi-state (and our first) multi-cat trip. Wish us luck. (On a side note, do you have a preference in cat collars? I love the one your cat is wearing).

SweatyBoobs said:
My cat has also made a couple 5 state car trips. Last month we picked up a new stray and they are the best of friends. Next week we make another multi-state (and our first) multi-cat trip. Wish us luck. (On a side note, do you have a preference in cat collars? I love the one your cat is wearing).
Click to expand...

I bought him a small dog harness and I had to expand the straps so it fits him. He's a pretty big cat. The brand is TrueLove and I got it from Amazon. It has a handle on the top that is very useful in situations such as him wanting to climb on the steering wheel while I am driving. Have fun with 2 travel cats! I'm sure they will do great!

That is one Cool CaT hAHA!
good journey
D

I closed my account
Meow! I traveled with my cat sweets up to yelm wa then back to Tucson. He didn't like it much but he stayed with the family. He loved portland. We lost him for 2 weeks in Palm desert while visiting my aunt but he came back... good luck safe n happy travels!

man... my cat is missing right now... traveled with her for 4 years man. adventure is a cats life, they love new places... we hitched it around for about 18 months together before we met a girl and got kinda civilized... then I bought a school bus to move my girl onto the road, well Dezi ( Desiree- kittys name) didn't like the house life and took to the bus while I was converting it. silly kitty lived in that bus with the doors open by herself all winter... when we finely moved into the bus that was the coolest thing ever to Dezi! of course I had put in cat shelves and cubby's for her

... I may do a post on her, I do have some neat pictures of us... haven't seen her since beginning of September and sure do miss her.

Awesome!! I want to get a road cat so badly but my boyfriends dog is a menace and I'm sure would try to kill it. Sigh. Some day...

I took him for a walk near Trees of Mystery in the Redwoods on our most recent journey.

It's all about baby steps. I put a light harness on my cat to wear around the house when he was much younger. He got used to wearing it. Initially he would lay down from the extra weight, but it wasn't long before he got used to the feeling and would carry on about his normal business.

I think it also helped that he is very comfortable walking very close to my feet. I never made him feel like he should get out of my way because I like that he wanted to be close to me. Some cats don't like you standing over them too close if they've had trauma associated with being stepped on. A cat that doesn't feel comfortable standing very close to you will be very difficult to leash train because they will have a tendency to be far away from you.

Using the leash indoors or in their own safe environment is a must, at least in the beginning. I learned the hard way that taking them outside on the lead for the first time is a bad idea. It took my cat a month to get used to being tethered to me. He pulled and jerked and tried to run away. I just took it easy and let him lead the walk. In the beginning you can't pull the leash at all and hope to get any cooperation. It took quite a while before my cat figured out the nuance of the gentle leash pull. If he doesn't cooperate I stand between him and the direction he wants to go, or I give him a light pat on the back of his tail and he gets the idea. That takes a lot of work, but he's made great progress over the years. Again, the key in my cats case is that I let him lead the walk 80% of the time. I'm just there to keep him out of danger.

One thing I noticed is that he likes to walk the length of walls, fences, etc. I think this may be common for cats, I'm not sure. 99% of the time I can count on him walking the entire length of a wall. So planning walks this way lends to a good amount of predictability.

The biggest challenge is the environment outdoors. Loud noises, cars, dogs, etc. can turn a pleasant walk into a frantic nightmare of nerves. This is typically the biggest hurdle. My cat is pretty chill, but he is a cat and can be spooked far easier than a dog can. I'm always on the lookout and I've gotten pretty good at mitigating these type of events.

It's a work in progress and I'm still learning new techniques when I walk him. I also treat our walks as meditation because every animal lives fully in the moment, so I try to follow his example and live more of my life in the now like he does. So when I walk with him, I observe and try to focus on the immediate surroundings, the sounds my footsteps make, the wind, surrounding noises, etc. That way I can experience a walking meditation and also be more aware of any impending danger which may be headed his way. I've had a few close calls, but was able to shield him from any frantic events simply because I was paying close attention to my surroundings instead of being on my phone, or thinking about something else.
A

From my experience she will either lay down and refuse to move or absolutely love it. Only one way to find out...
You must log in or register to reply here.