I deleted myself
so me and my boyfriend and our band were traveling down the coast of California on our journey to Oklahoma City to see our friends. We ended up in a place called Monterey Bay, which was really beautiful! There were sea lions all over and this great view of the ocean! it was great! i loved it. We made tons of money down there too! the only problem is the rangers over there were nazis about people sleeping on the beach so we had to find a squat..

luckily when we went to taco bell this kid told us he had a squat that he opened up. he was really skinny and tall, really pointy elbows, long hair in his face. He was with a very young looking girl with a blue mohawk. Apparently this was an office building that he rewired so when you pressed the handicapped button the doors swung open. It was rad! each of us got a room. it was a big building. we stayed there for a week probably, going to play music durring the day and coming to our squat after taco bell with beer.

so this guy who opened the squat, his name was Grinch, came up to the roof with me and told me how proud he was of his squat, that he worked so hard on it and shit. but then he told me it has a self distruct date. I was like, WTF?????? he told me one day soon... the alarm will go off when someone opens the door, because its set on a timer and he could only set it for so long, and if he fucked with it again, it might set the place off. so we were sitting in a ticking time bomb for the police to come scoop us up basically. it kinda freaked me out but i was too drunk to care at the moment.

after talking to him for a while, it ended up leading to him trying to kiss me, he tried real hard for a good 5 minutes till i ended up punching him in the face and stormed back to my room where my band and all the other kids who lived in the squat were drinking and playing music. Apparently most of the kids have some sort of vendetta against him, and i can see why, he's kind of a skeezy egocentric ass hole. He probably stole from them... he also fuuuuuucked that squat up bad.

anyway, my boyfriend and all my friends ended up finding out he tried doing that shit and they (mainly my boyfriend) freaked out. we were all wasted, mind you, and when me and lion and those kids get drunk we would get a little out of hand. Ill admit we were kind of asking for all this, but ha... any way. we (me and lion) began freaking out about how we were going to go down there and kick him out of his own squat (we had this joke going about "its our ____ now" ever since our acordian player hollered ITS OUR CORNER NOW in SFSF territory haha.) but our banjo player had to stop us cause he knew it'd end up messy. so he ended up reasoning with him that he had to either come appologise to me and lion or he needed to leave, and he decided to just leave. but after 30 minutes we never heard him go so me and lion went to go "check" and see if he was gone yet and well, he wasn't and his office door was locked. now at this point i was browning out pretty bad and dont really remember much other than him smashing a bunch of forties on the ground by my dog, followed by me and lion tackling him to the ground and me kicking him in the head a few times till our banjo player held me back and him screaming for help while he ran out of the squat with all his gear flying everywhere. while i screamed "ITS OUR SQUAT NOWWW!!"

as a celabration for our victory agaist this ass hole that cut my dogs feet up with broken glass and put his hands all over me, we drew a HUGE picture on the wall of my room (which you can see below ). which probably wasnt the best idea since the allarm went off the next day and the cops came. luckily we werent there at the time, but i did draw everyone in our band and our dogs and our intruments in vivid detail. and the name of our band hahaha.

& when we were hitching out the next day the cops stopped us and asked what was in our cases haha. we never got caught.. but im never going back there again! haha 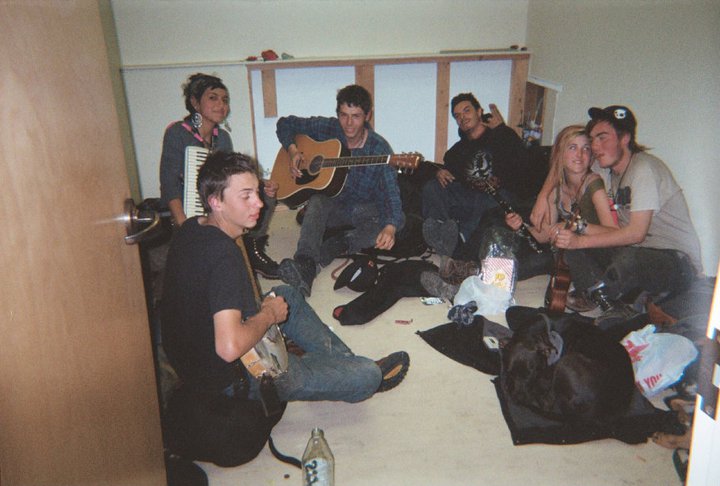 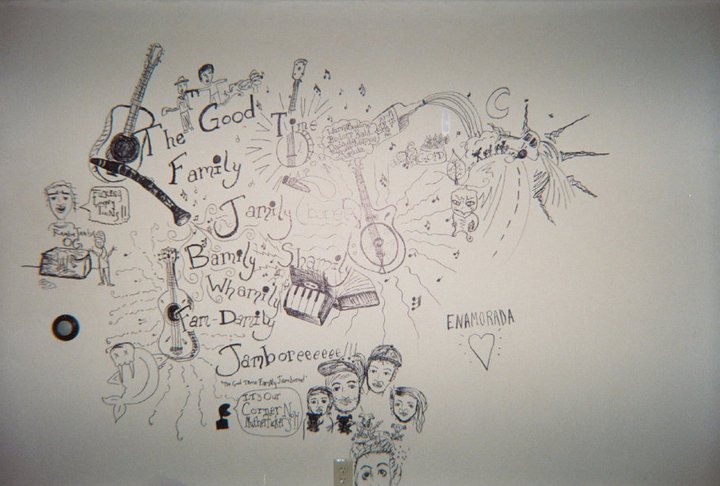 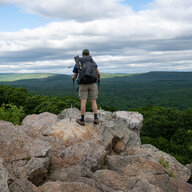 I deleted myself
it was crazy. the next morning we went down there and there was glass and blood everywhere and all over our clothes.
OP
E

I deleted myself
HAHAH OH YEAH! and there was a picture i drew on the top of greg shoooting the park ranger who gave us a ticket!

i want to hear more about your band. did you post in the music forum?

i love monterrey. its a great place to make money busking as well. i hope it don't get blown up
OP
E

plagueship said:
i want to hear more about your band. did you post in the music forum?
Click to expand...

no! i havent, im no longer playing with them, but ill put a link up. there on itunes? hah

I deleted myself
were called the good time family jamboree 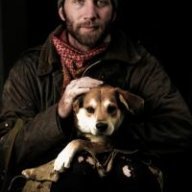 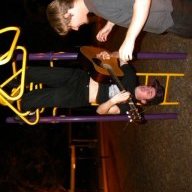 Is it hard to travel with that many people + a dog?
OP
E

I deleted myself
5 people 4 dogs... not really, we would split up like 2 n 2 and one. and meet up and mob citys
You must log in or register to reply here.
Similar threads
Photos Squat the Airport. And the planet
Creative housing alternatives aka squatting in strange and unusual places!
hitchhike nightmare tips
Featured That time i hitchhiked to Belgium and almost died :P
Featured From one squat to another through the countryside
Featured 5 months in the land down under
A World on Fire - Life and Death in a New Orleans Squat
Not so squat house
SF squat. crazy times
16th and Summit squat, Idiots, Cops, and the Fire Dept
Share:
Facebook Twitter Reddit Pinterest Tumblr WhatsApp Email Link