Just spent a week traveling Washington and Oregon with @Geraldo. It was a great time and we both documented the journey so I thought I'd share with you folks.

I took a Boltbus down to Portland, where Geraldo picked me up. We picked up her friend Terry and spent the night in Columbia City. The next day we loaded up the truck with a kayak, an inflatable raft, gear, and food. We made stops for firewood and liquor and headed to the St. Helens Marina. 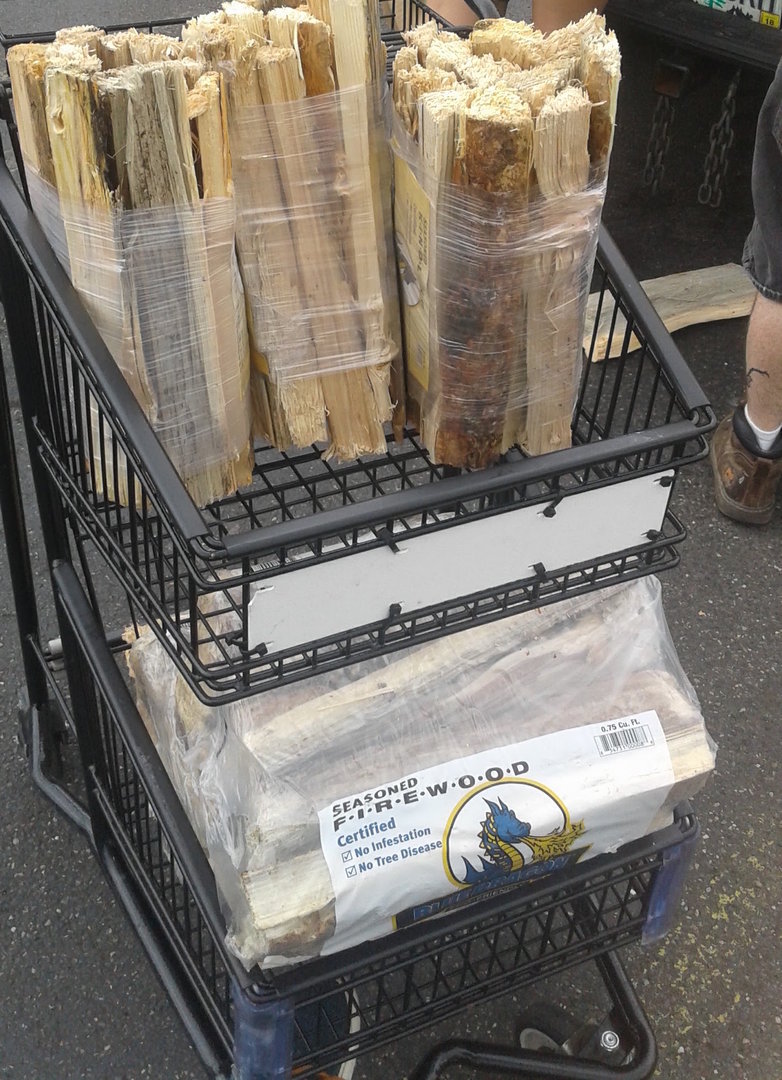 We bought all the firewood the grocery store had.

Since I don't know how to kayak, Geraldo shoved me in a sketchy inflatable raft tied to her kayak and we (mostly her) paddled to the island. 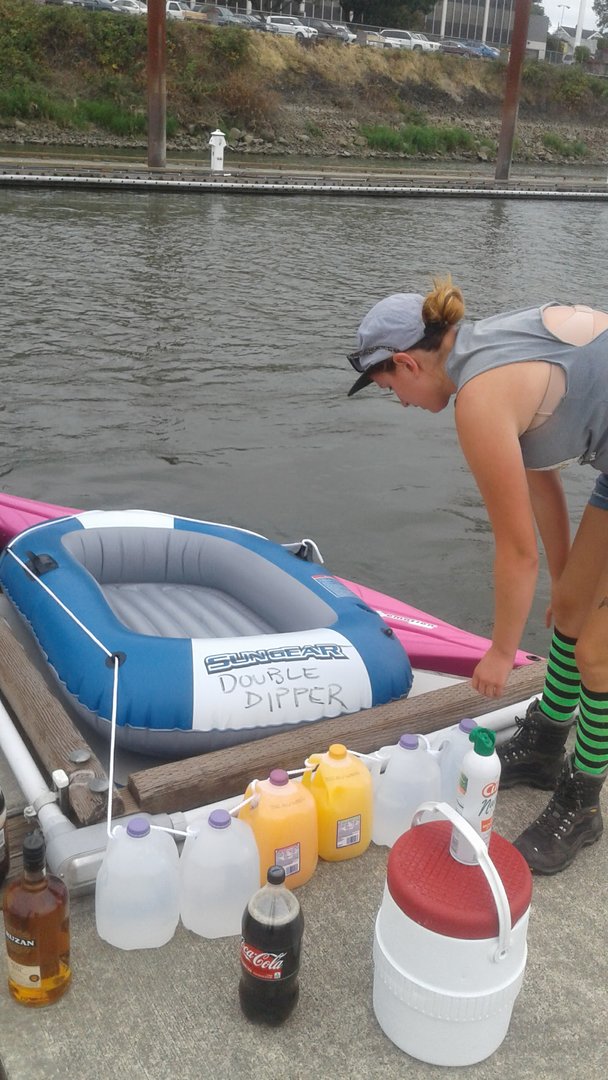 Geraldo ties provisions to the Double Dipper. Also pictured: some (but not all) of the booze we brought. 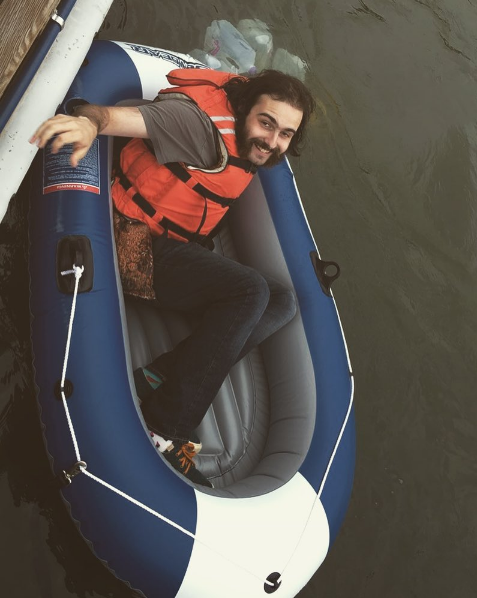 I try not to die as I get in the raft.

The original plan was to make trips back and forth with all our stuff but as Geraldo prepared to head back to the marina, we saw a boat coming towards us. Turns out Terry and Megan had convinced some boaters to give them a ride to the island with nearly all our gear! 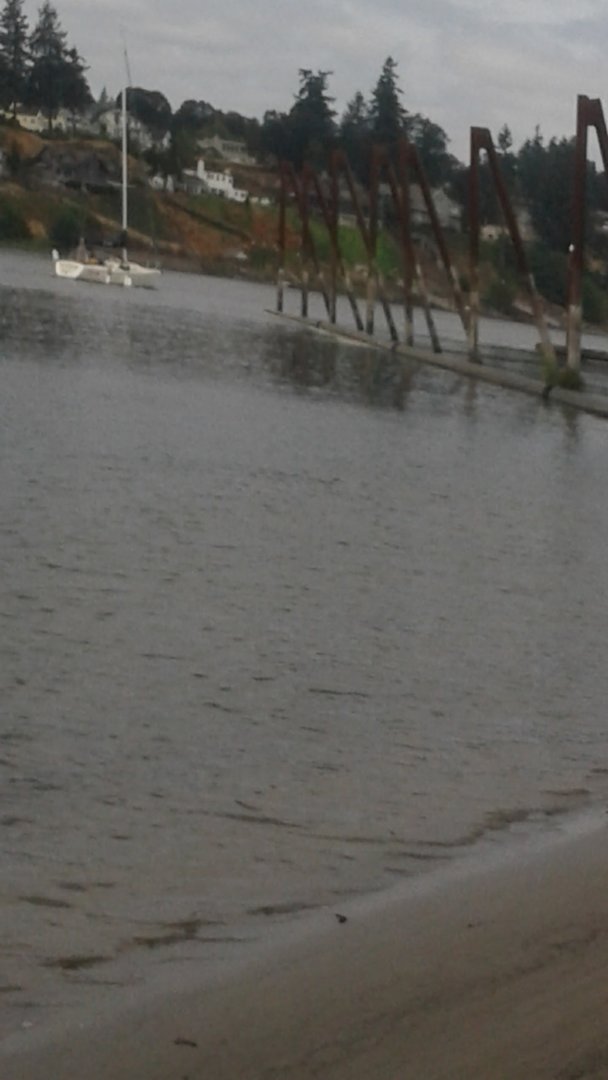 Since we got most of our stuff across that way, all we needed to do was send Terry over on the kayak to pick up some of the food and Geraldo's doggo. We set up camp and started a fire for dinner. 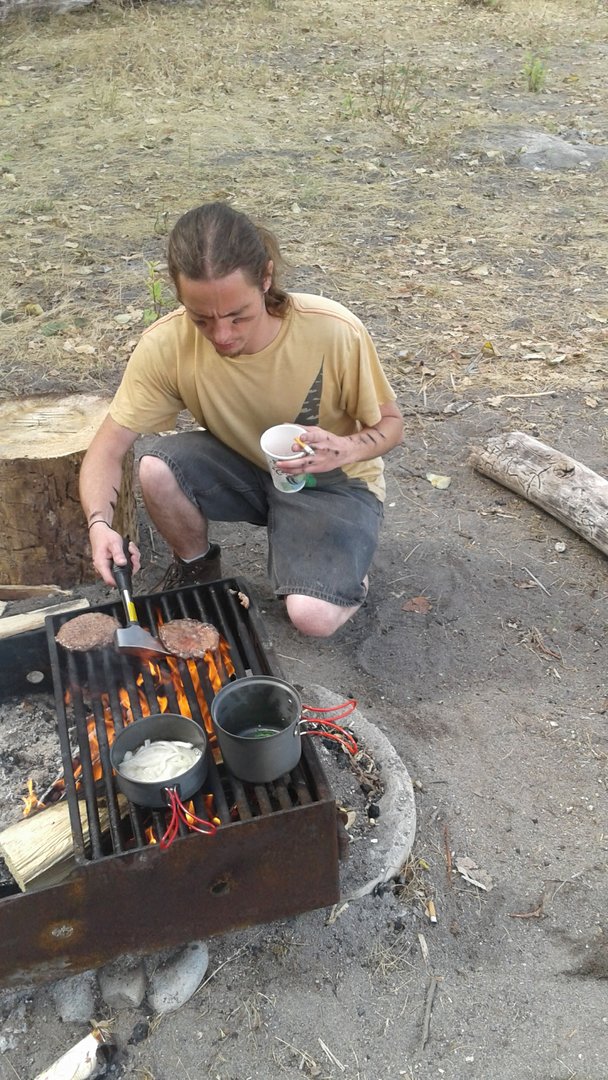 Terry, clad in warpaint, flips burgers with a hatchet since we didn't have a spatula

Then we got very drunk on wine and rum, applied warpaint, and sang songs. 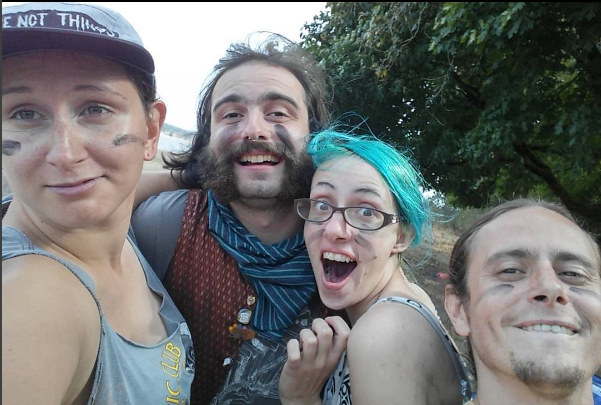 The next morning we discovered raccoons had gotten into our food and chewed up a few MREs and some avocados and somehow hauled away an entire 5-pound bag of dog food. Sneaky motherfuckers.

For breakfast, we made breakfast tacos with eggs, cheese, bacon, onions, jalapenos, and mushrooms.

We all went back to sleep for a while then took a hike around the island. 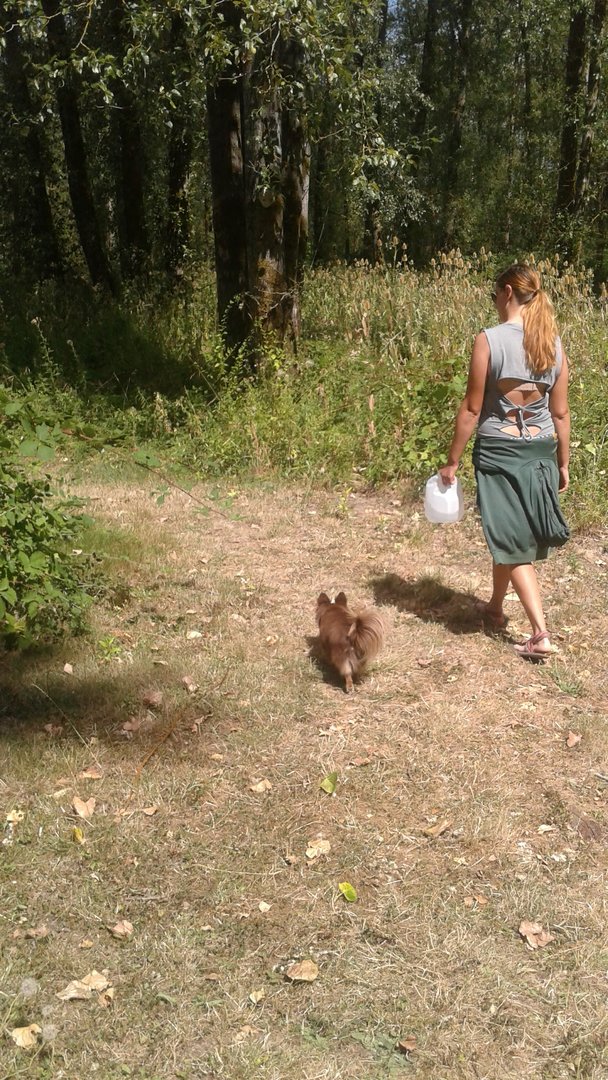 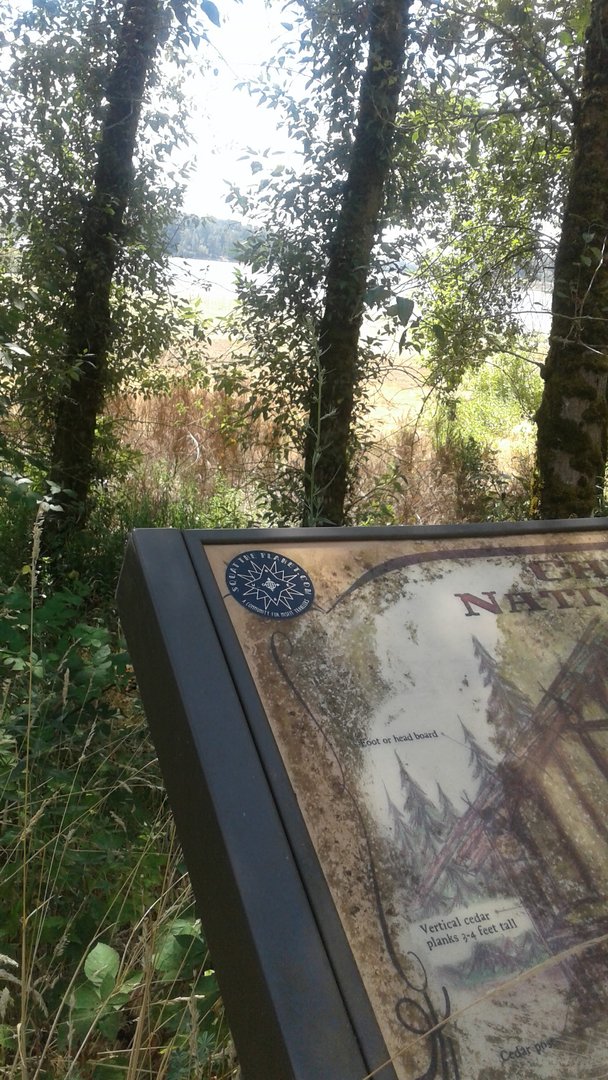 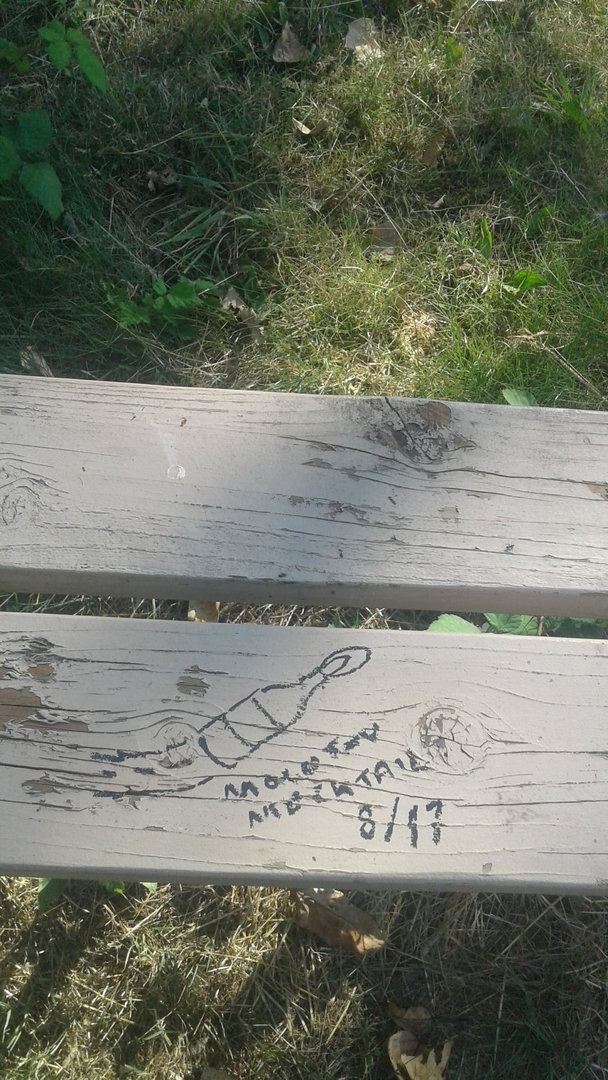 Had to leave my mark on the island as well.

In the afternoon, Terry and Megan had to leave. We hauled all their gear to the dock as well as a bunch of stuff Geraldo and I wouldn't need for our last night on the island. We loaded up the inflatable raft but the water was choppy and Geraldo couldn't pull the weight of the raft with the kayak. There was a couple in a boat who had been watching us haul all our gear. We had been trying to act as desperate as possible in the hopes that they would offer a ride but they were busy hollering loudly (seriously). Finally we asked if we could pay them or smoke them out to give Terry and Megan a ride. They said that if we smoked them out they could give them a ride but we would have to wait because they were having a "spiritual moment." Eventually they were done being spiritual and took Terry and Megan back to the marina.

Geraldo and I set up camp underneath a big covered area near the dock and ate an MRE for dinner. It was one of the ones the raccoons had nibbled on so we had to use duct tape to patch up the hole in the bag. 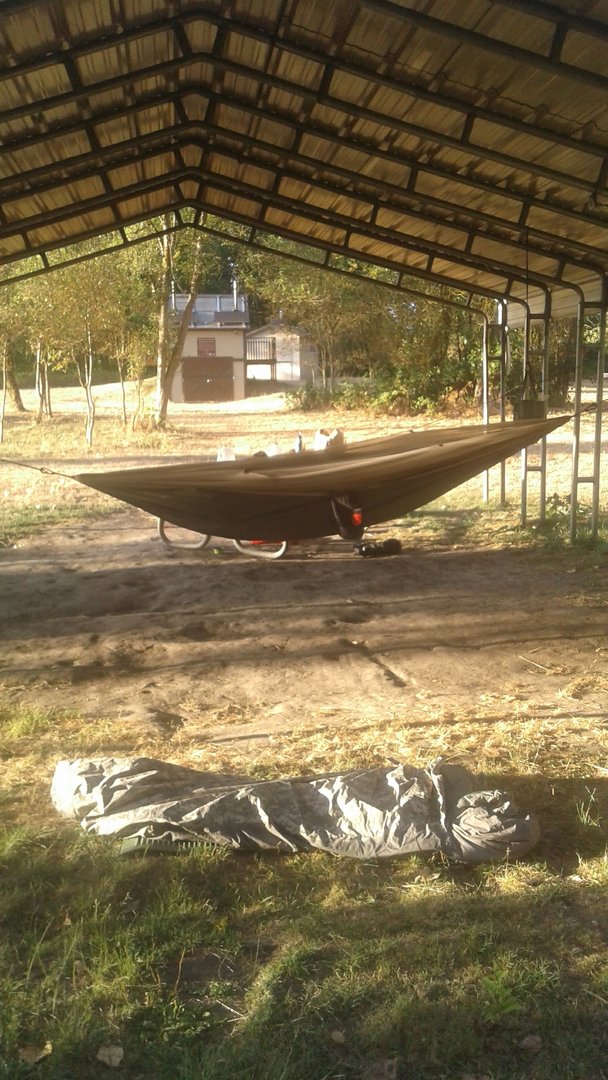 Geraldo's hammock and my bivy.

The next day we moved all our remaining gear to the dock. There were no boats we could hitch a ride with so we had to kayak back. The water wasn't as choppy as the day before but I was in the slightly-deflated raft with both our packs in my lap so it was pretty unnerving. But we made it back to land and immediately headed to a bar for a much-deserved drink and some food.

We spent the night in Columbia City then drove up to Seattle for a night where we visited with friends. The next day, we were planning on heading east to Idaho to view the eclipse but we decided to avoid the gnarly traffic. We briefly toyed with the idea of going to Canada but we didn't have the right documentation for the doggo and were worried about getting turned away at the border. We ended up driving to my family's farm in Snohomish (around 30 miles north of Seattle) and spending a night there.

Gathering of the doggos.

The next day, we took a ferry from Edmonds to Kingston. We drove to Port Angeles and got lunch in town. We set out to find a camp spot we had read about online but we couldn't find it so we pulled over at a scenic rest stop and hoped we wouldn't get kicked out by any cops. 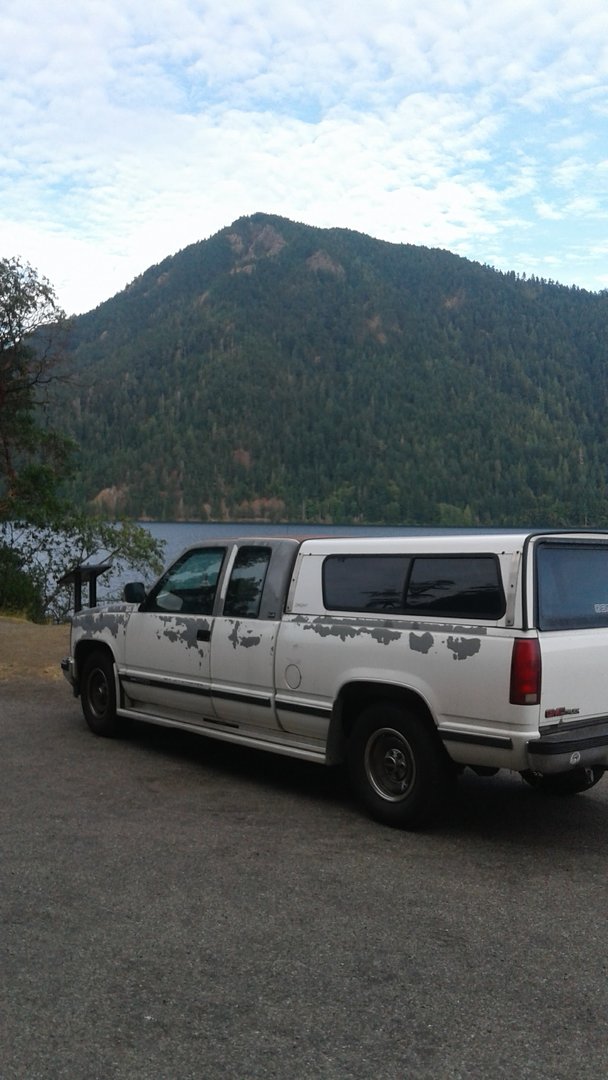 Our campsite and accommodations for the night.

Luckily, we made it through the night without any knocks on the window. I tried cooking scrambled eggs on my backpacking stove but they turned out terrible (thin cookware on a backpacking stove is pretty unforgiving) so I boiled water for tea and fried some slices of Spam for breakfast.

We drove into Port Angeles and explored the town a little bit. 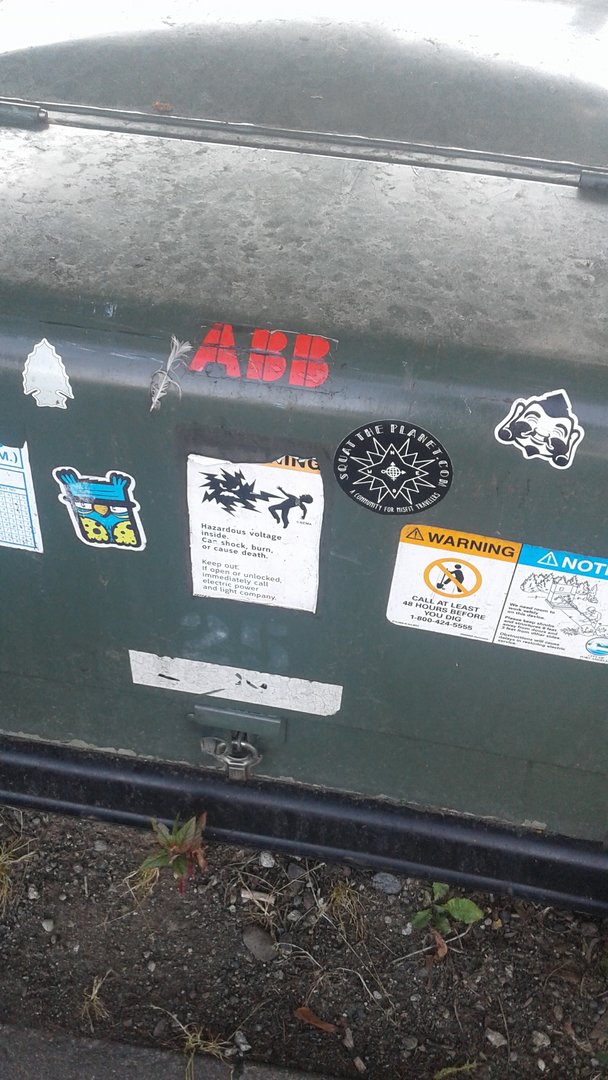 Had to leave our mark somewhere.

Instead of hopping back on the ferry we went back through Olympia then drove back to Seattle. I went home to take shower and a nap and Geraldo went out with friends before heading back to Portland today. 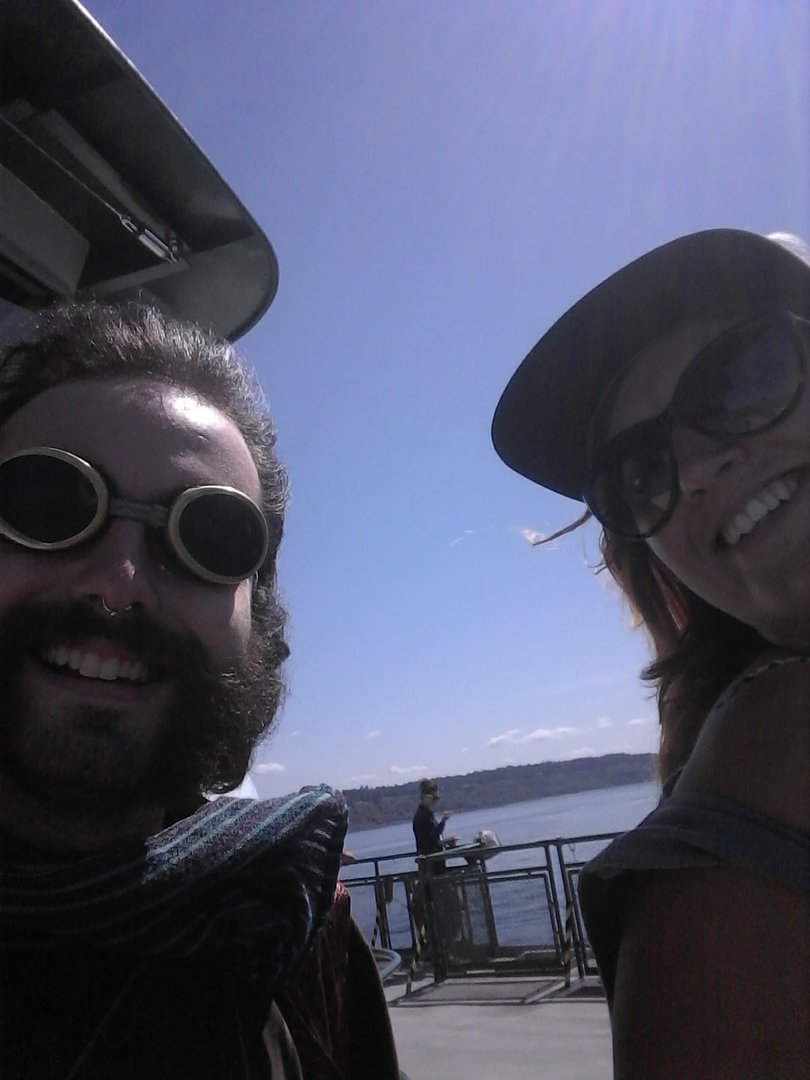 I closed my account
More pictures of the trip (And half of this post got deleted for some reason?):

Doggo being a Doogle

On the Ferry ("SEE @MolotovMocktail WE TECHNICALLY HITCHED A BOAT.")

And finally, @MolotovMocktail and I in a nutshell:

I closed my account
AMAZING pics, looks like yall had a blast. and lol at the double dipper.
O

It looks beautiful out there.

Sounds (and looks) like it was a great time!

ha, that's awesome, looks like you had a great time. sorry anna and i missed it but damn, i'm pretty sure my fat ass woulda sunk that raft in no time flat. 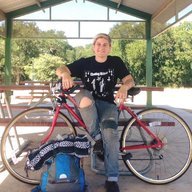 ahhh I love this! It looks like it was a fucking blast! I'm from Port Angeles (ish) so it was great to see others enjoying it and makes me miss it <3 I'll be heading up those ways possibly this winter. Let's camp!
You must log in or register to reply here.

Travel Stories Jan 29, 2021
Koala
I hopped freights, hitched, bicycled and squated North America for 6 years, now I am off the road and living in ATX.

The In-Between Saturday at 8:32 PM
IanIam