Vice sucks, but this is pretty cool! People are squatting houses to bring awareness to the housing crisis

http://www.vice.com/en_au/read/bedi...ing-awareness-for-melbournes-housing-shortage
A Day With the Squatters Protesting Melbourne's Housing Crisis

It began with an unoccupied brick house in Melbourne's inner north. In mid-March four homeless women found number 18 Bendigo Street, Collingwood after the land was acquired by the government to build the East West Link freeway, only for the plan to be scrapped. The women moved in but were quickly evicted by the police. Early the next morning, the Homeless Persons' Union of Victoria got wind of the situation and a group of them snuck into number 16, one of the several other unoccupied houses on the same street.

Their plan was simple: make noise to raise awareness of the housing crisis in Melbourne. Figures suggest there are 25,000 homeless people in Victoria in 2016, while another 33,000 are on a waiting for public housing. Yet there are 80,000 empty houses in Melbourne according to this article in the Herald Sun, which is the number adopted by the HPUV. So they'd protest at one of these State Government-owned houses on Bendigo Street and see what kind of response they could attract. It wasn't meant to go on for as long as it has. But after standoffs with police and real estate agents, a few shifts between houses and growing community support, the action has snowballed. The Bendigo Street Occupation, now comprised of several homes, is running into its third week. 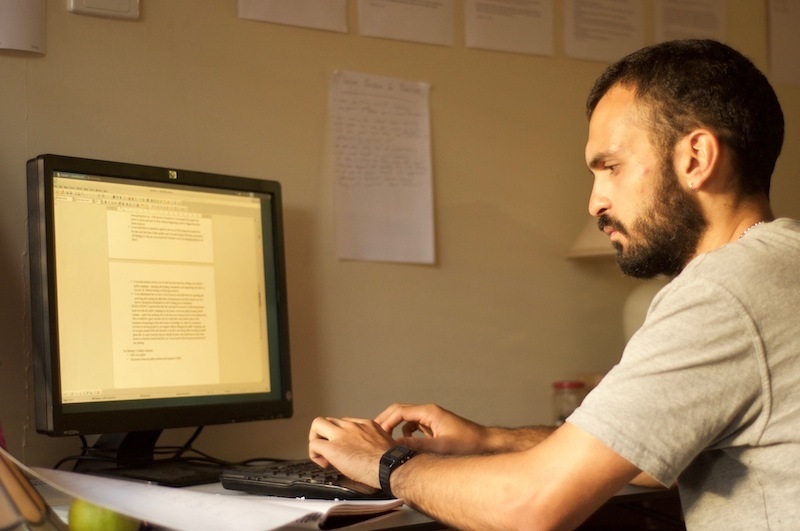 Javed at his desk. All photos by the author.

This is why I find myself heading down to number two on a Saturday. The previous Thursday I'd met with housing activist Javed, who had given me a rundown of how they were operating. They'd also had some problems with the media, he explained. Some media organisations were going out of their way to portray them as filthy squatters. Earlier in the week a visiting Channel Nine cameraman had spent some time filming some hummus dip that had fallen on their floor. Javed had to block his view, he said, not wanting this errant hummus to shape public opinion of their endeavour.


It's not long after I arrive on Saturday that I see why something so inconsequential as a bit of dip on the floor would be pounced upon. Number two Bendigo Street, as it stands today, is a nice house. Nicer than mine actually, and significantly cleaner. Apart from a clutter of pamphlets, notebooks and clipboards on the kitchen table, it's spotless. The open plan kitchen and lounge is stocked with fresh food and furniture donated over the last fortnight, including a fridge from the neighbours across the street. The water is running, the power is on. A few people hang out on couches or keep themselves busy in one of the bedrooms, while others chat and smoke out the back. People come and go, some dropping off food, some just to socialise. 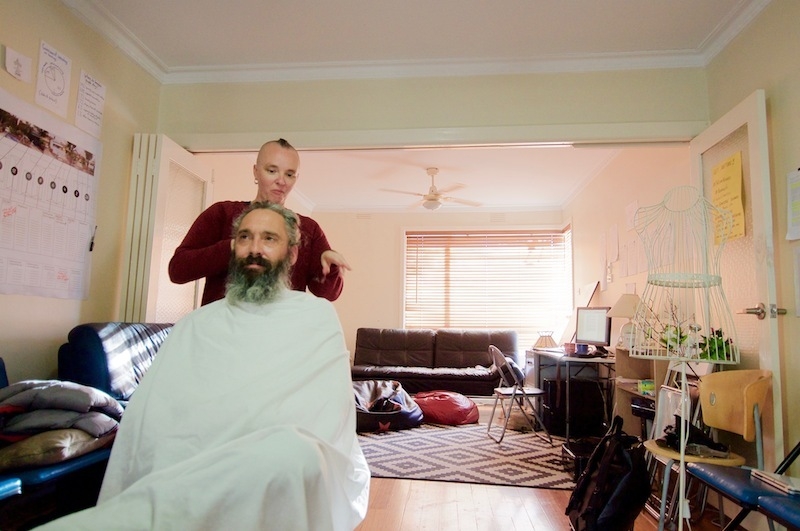 Kelly giving a haircut to a resident.

It's a relatively quiet day but for HPUV member Kelly, it's been a hard two weeks. "Actually, it's a rollercoaster," she says. "We never know who is going to rock up, the Salvation Army or the police. Different people coming forward needing shelter. Different groups having their own ideas. It's just, intense." She laughs. "Amazing, intense."

It's not hard to imagine why. Hundreds of people have been through the house in the past two weeks, and around 40 have spent a night here. Everyone gets treated with the same level of hospitality. When someone new arrives they're happily greeted, and if they want to stay, a spot is found. 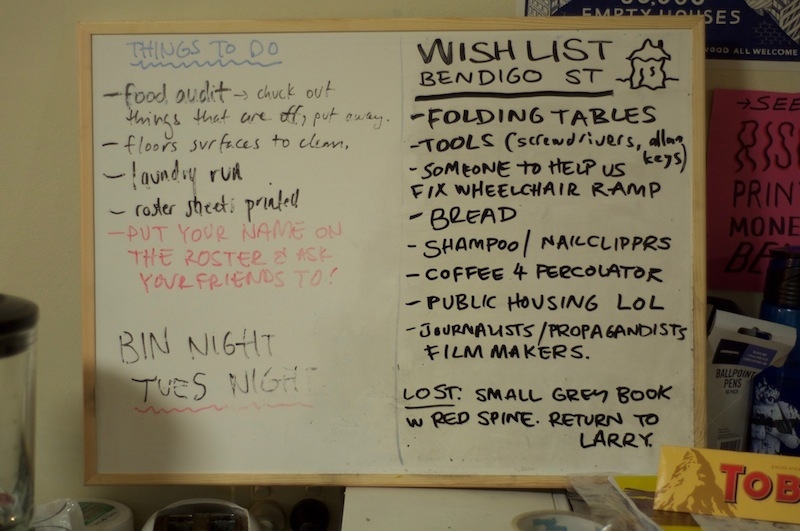 For a squat, they're incredibly well organised and peaceful, which might explain how they've managed to get along with the police, so far. As we chat out the front a police car cruises silently down the street. The copper in the driver's seat waves lazily at us and Kelly waves back. "I guess they're just coming around to check we're not wrecking the joint," she laughs.

There's one major group though, which has remained conspicuously silent: the State Government. One of the occupiers' five demands was that the Andrews Government outline how they were going to address the housing crisis, but by Saturday the occupation hasn't been even acknowledged yet. On Sunday there's a development: afront page article in The Age reported the Premier Daniel Andrews was considering turning the empty houses acquired for East West Link into affordable housing for family violence survivors. 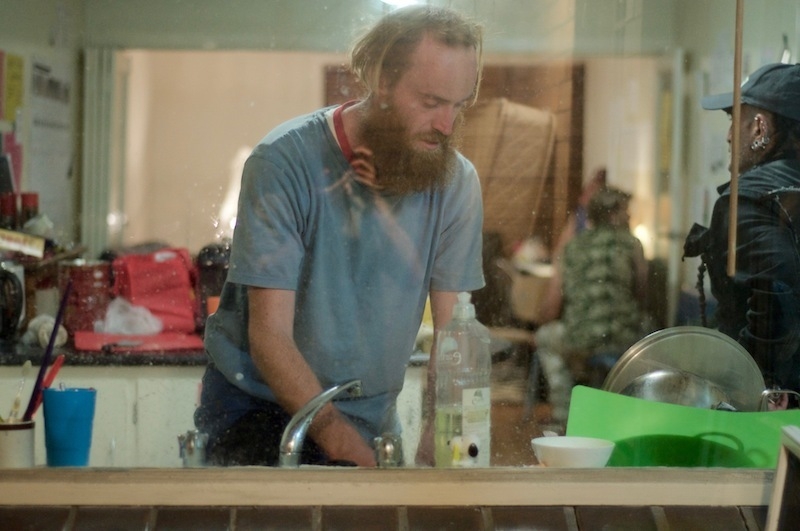 For the activists, it's a sign they're having an effect. Javed tells me over the phone on Monday that even though there's a lot of maybes and coulds, it's a "major achievement to get them to say this."

"I think there's plenty of reason to be suspicious about these kind of claims, but at the same time we welcome the interest they're taking in survivors of family violence and people who have to flee family violence," he says, adding, "but we're certainly not imagining going anywhere in the short term because as far as we can tell there is no commitment."

The development has changed the mood at number two. Javed explains that while they feel they've helped contribute to this response from the Andrew's Government, now is the time to focus the campaign on outcomes.

"For a while it seemed anything was possible and all that sort of stuff," he says. "But now it's a kind of a down to business atmosphere."
Last edited by a moderator: Apr 19, 2016

Edited to include the article in the post. Cool story, thanks for posting it.

Yeah, thanks! I thought posting the adress as a link would do it automatically, then realized that it didn't, but didn't wanna mess with it on mobile

Hah, I remember reading this a while ago, before I ever came to Australia and now looking at it again I realize I've spent multiple nights in that house and I've met everyone in those photos.

An update on the situation, this house was reclaimed by the gov't and all residents were evicted probably about a month and a half ago. There are still a few houses occupied on Bendigo St., but there's been a lot of police and security presence on the street lately and another house was evicted last week. One by one the gov't is cracking down on these houses. Pretty cool they've been occupying since March, but it's disgusting that they keep evicting people, these houses are filled mostly with Aboriginal and LGBTQ+ people.
Last edited: Nov 9, 2016
You must log in or register to reply here.