Meet the junk rafts and gutter punks of the Venice Canals

In the summer of 2009, The Swimming Cities of Serenissima sailed from Slovenia to Italy, eventually making their way down the Grand Canal in Venice. The artist Swoon designed the junk rafts as a collective art piece; they resembled floating structures rather than regular boats. Photographer Tod Seelie was a crewmember on The Swimming Cities projects and we recently had a chat with Tod to find out what it was all about. 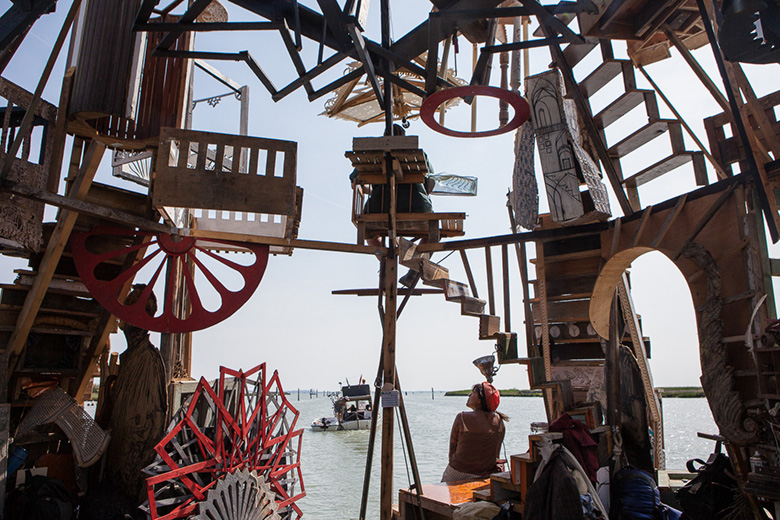 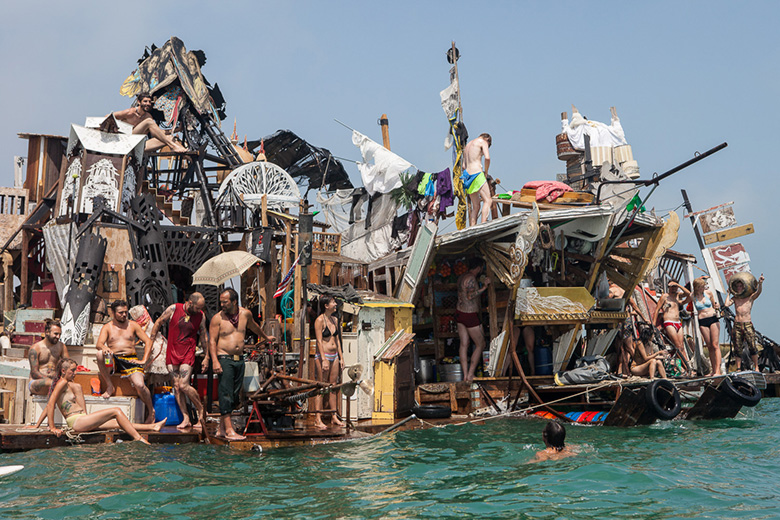 Tell me about the project. You’ve said the purpose of the trip, for you, was inspiration. How have these trips inspired you?

The Swimming Cities of Serenissima took place over the summer of 2009 and was the culmination of the past three years spent building and traveling on junk rafts. The first two were spent on the Mississippi River and the third on the Hudson River. It was the fourth and final instalment of that series of trips. By the fourth year this had become a familiar family and temporary way of life for some people. We surprised ourselves with what we had been able to accomplish and how crazy our current adventure was. All of that, I think, was some of the most inspiring experiences I have had. 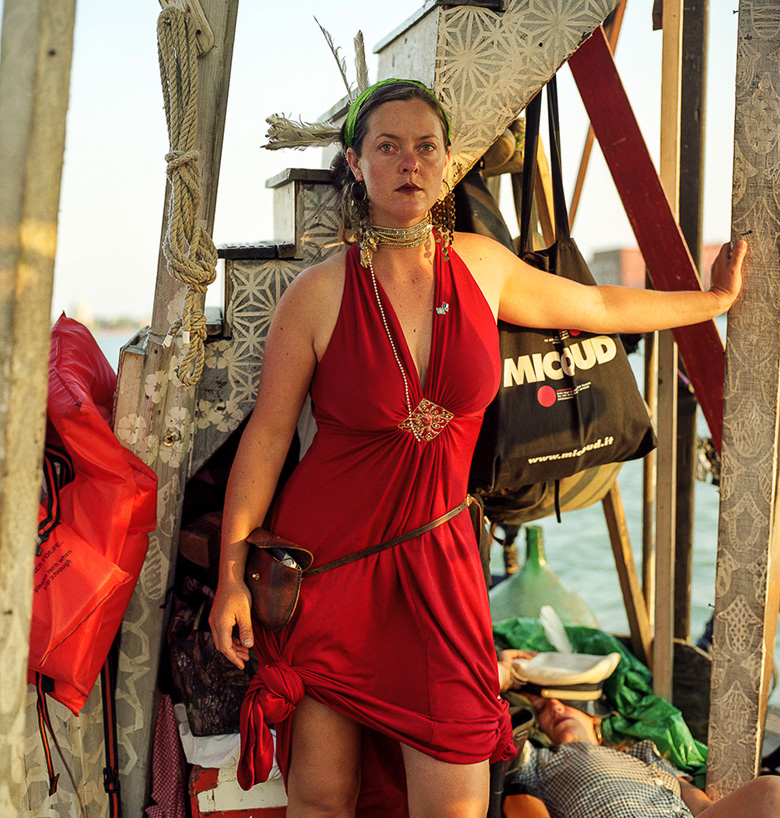 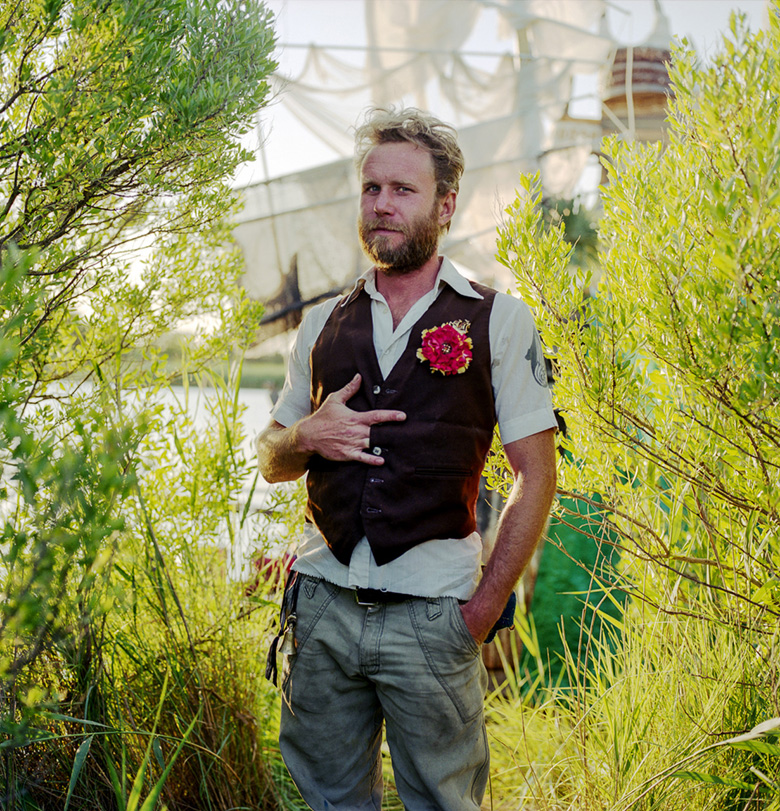 Was the crew on Swimming Cities made up entirely by artists and musicians?

Pretty much. The crew for the Swimming Cities was hand-picked by Swoon, so it was a sort of “A-Team” composed to pull off the wide variety of demands that such an ambitious project required.

How did people react to seeing you all floating by? Did you get much community involvement?

People’s reactions and involvement varied greatly. We found some people to be very standoffish, and later learned that a lot of them thought we were “punkabestia,” a derogatory Italian word for gutter punk. In other places half the town would hang out with us, bringing huge pots of stew and bottles of homemade wine for us. So it was all over the spectrum. 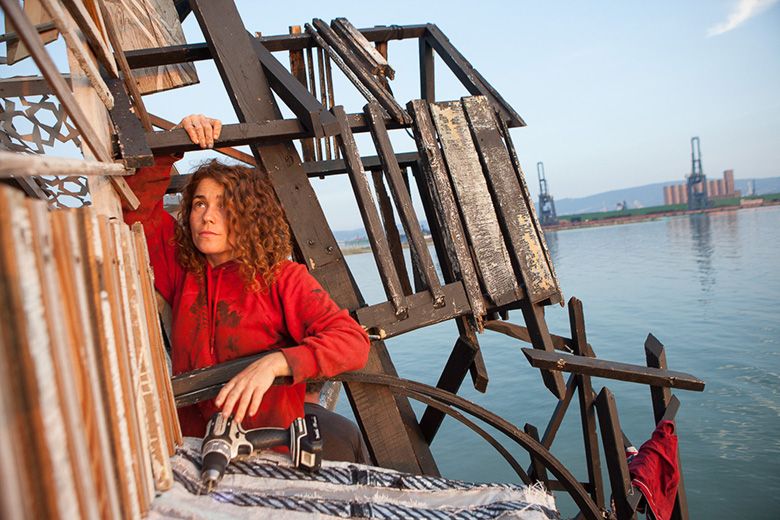 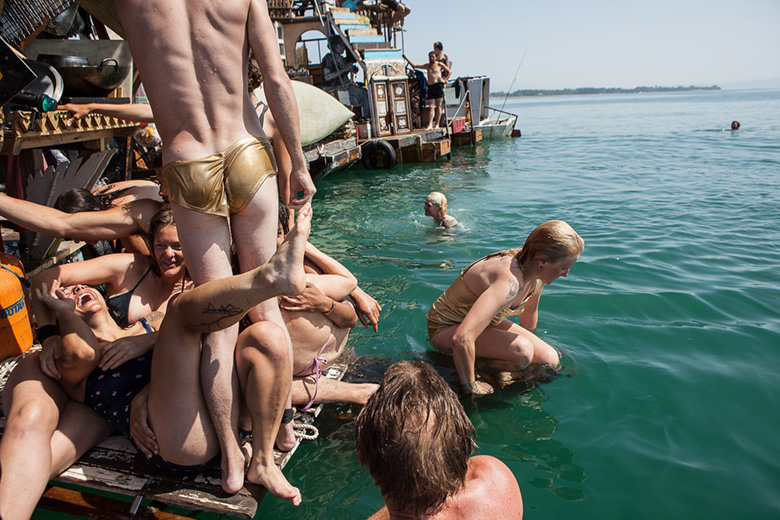 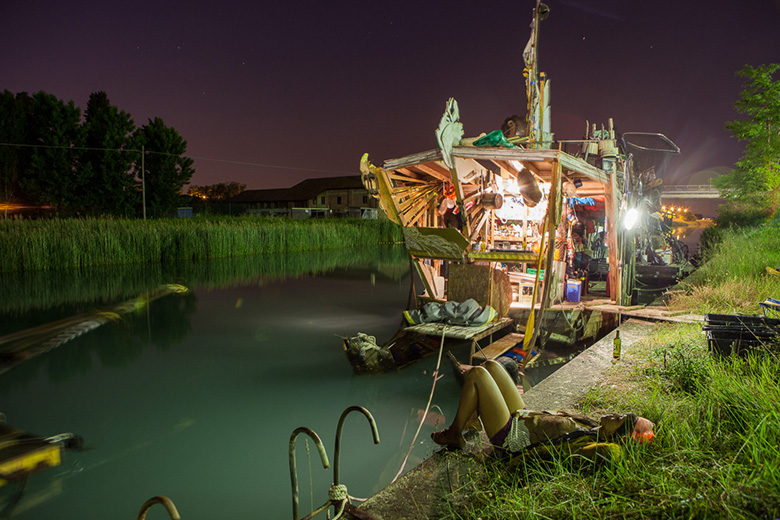 What sort of performances did the crew put on?

The early performances when we were still on our way to Venice were impromptu variety shows. There were a good handful of musicians, clowns and performers in the crew, so they would pull something together if enough of an audience had gathered. Once we were in Venice there was a regular show that we would do just after sunset in various places docked on the edge of Venice. The rafts would all tie together and then come to life like an elaborate cuckoo clock, with various parts of the rafts taking turns animating with live music accompaniment. 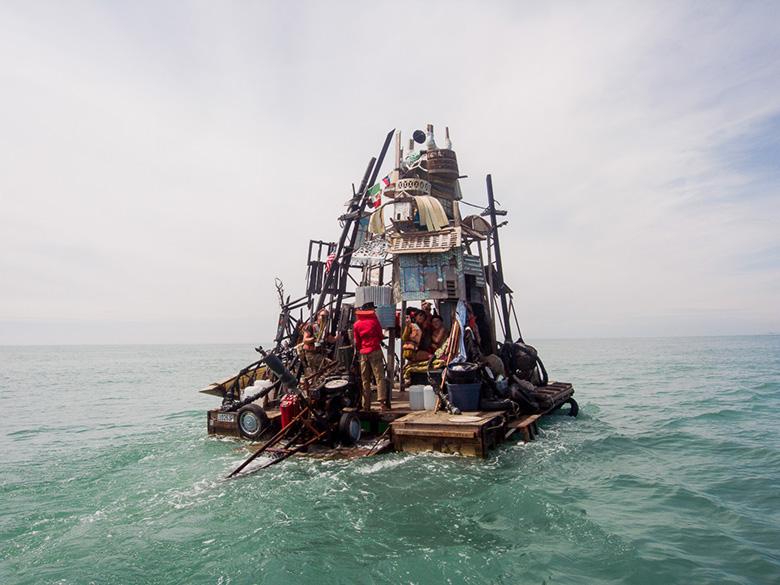 I’ve read the timber for the boats came out of New York dumpsters or bought from salvage yards, is this true? Was the project entirely independently funded?

There were many rafts over the course of the four years and all were built with salvaged materials. The construction boom happening in NYC in the mid-2000s provided a lot of scrap material that we pulled from dumpsters. One of the largest rafts, Old Hickory, was built in Slovenia, so the materials were salvaged there. The project on the Mississippi, The Miss Rockaway Armada, was fully self-funded by the crew. The Swimming Cities projects received financial assistance from the artist Swoon and her gallery at the time – Deitch Projects. 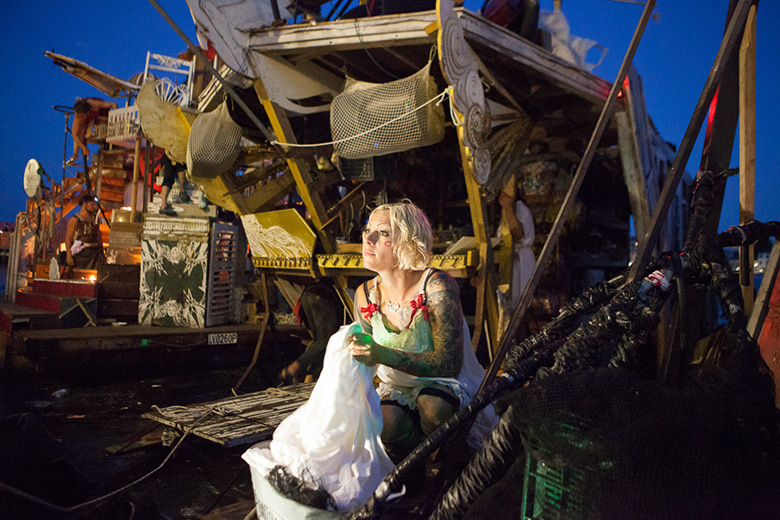 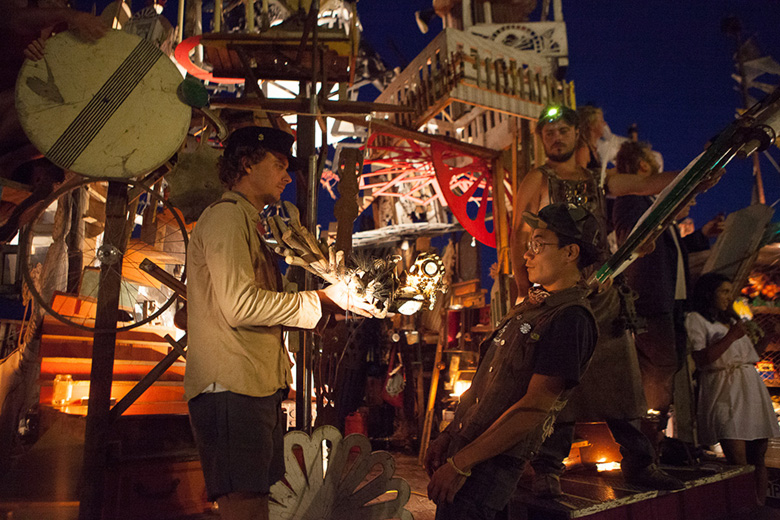 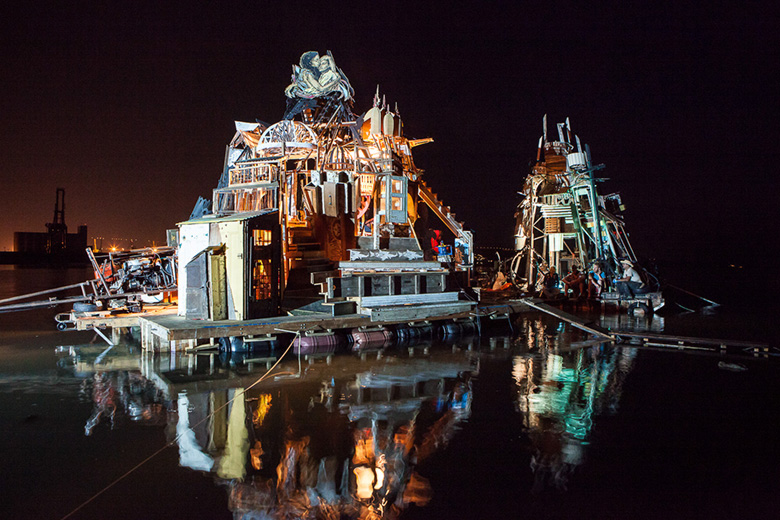 Do you think this is doable in other countries by other groups or do you think it’s better as a one off experiment? Have any other projects spawned from the trips?

We took our project to Europe and a splinter group headed to the Ganges in India, so it definitely can happen in other countries. The experience of the raft trips built a foundation of community that led to many other projects, so it’s not exactly that you have to choose one over the other. There are also annual homemade boat parties that take place every summer in NYC and California but there are no plans to revisit anything of the scale of the Swimming Cities. 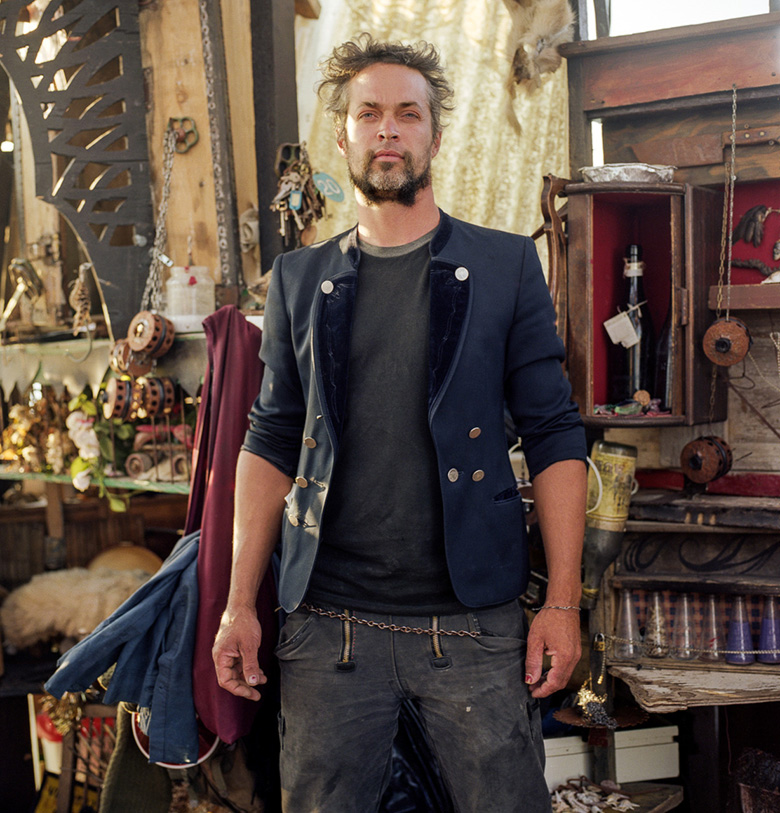 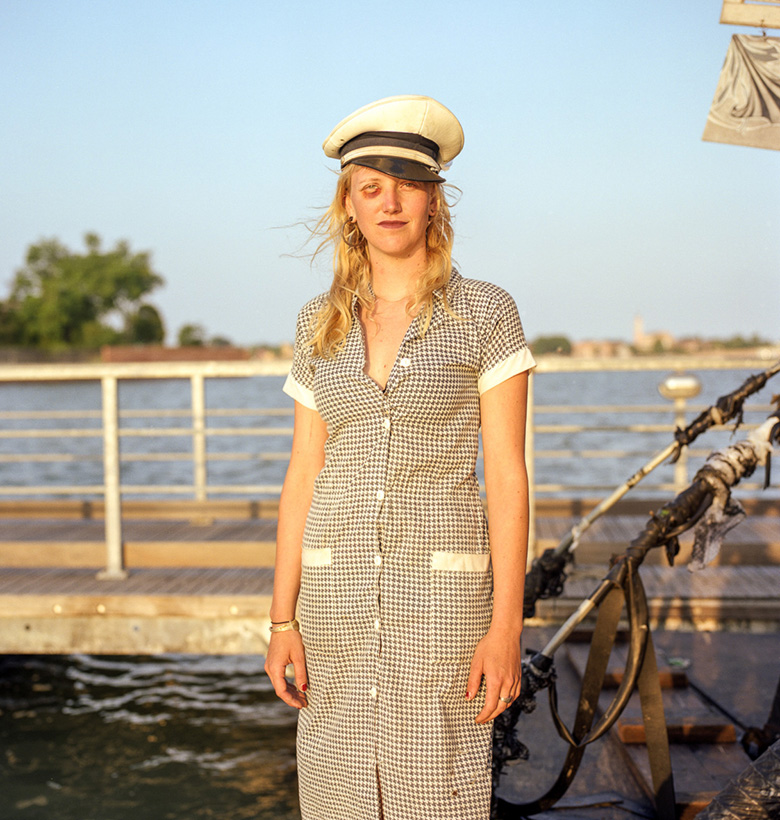 You were a part of the crew; do you shoot all your stories with immersion into the community? Have you found this can change your images?

I tend to just shoot my life, where I am and what I’m up to. So I am immersed in these events, but it is often because I am part of the group or project. I don’t usually seek strangers out to do a “project” on, rather my work tends to be a personal recording of my life. I’m sure this does affect my images, since I see people as friends and collaborators and not just subjects. When I work strictly as a photojournalist the opposite is true, the nature of the job requires a specific objectivity. Since these jobs are assigned by a publication the line is very clear. 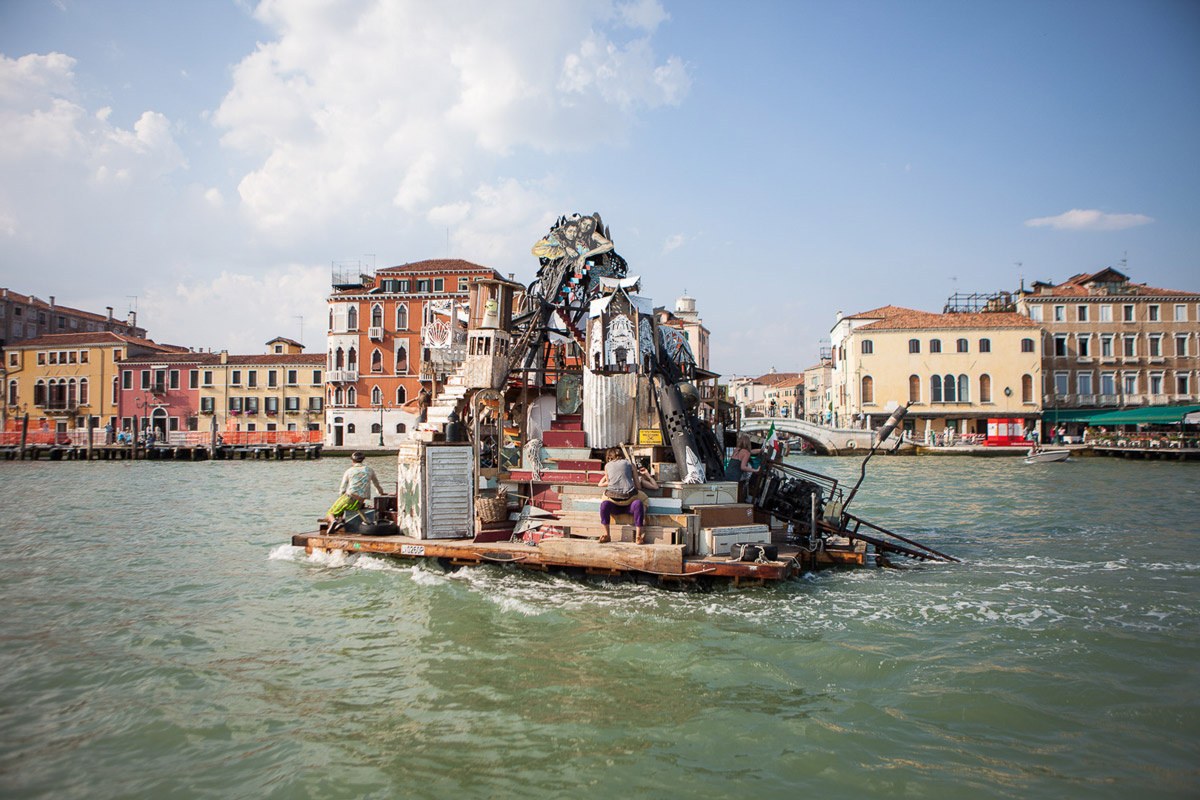 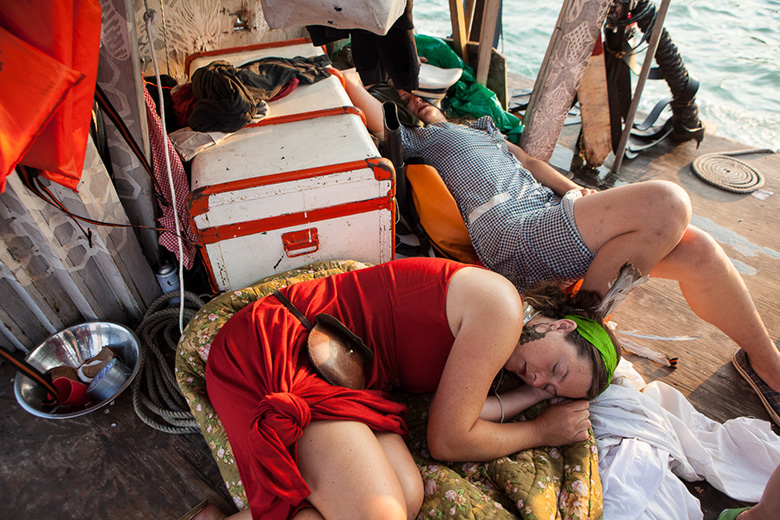 So for you, it’s experience first, camera second?

I am someone who always has a camera with me, so it’s not something I have to make a conscious decision about. These sort of things are what make life worth living to me, so I am always down to sign up for the next adventure. I think it is important to be an asset to any group or project besides just documenting it. You should be contributing to the overall goal, helping build the thing, lift the heavy thing, do the dishes, whatever. 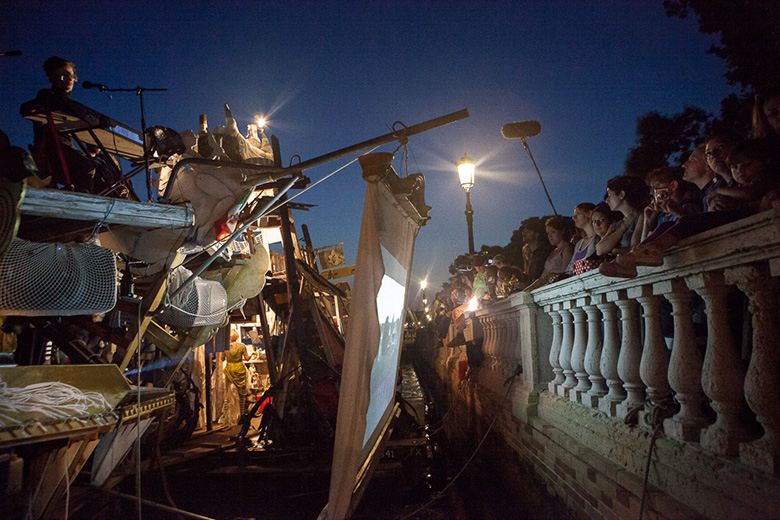 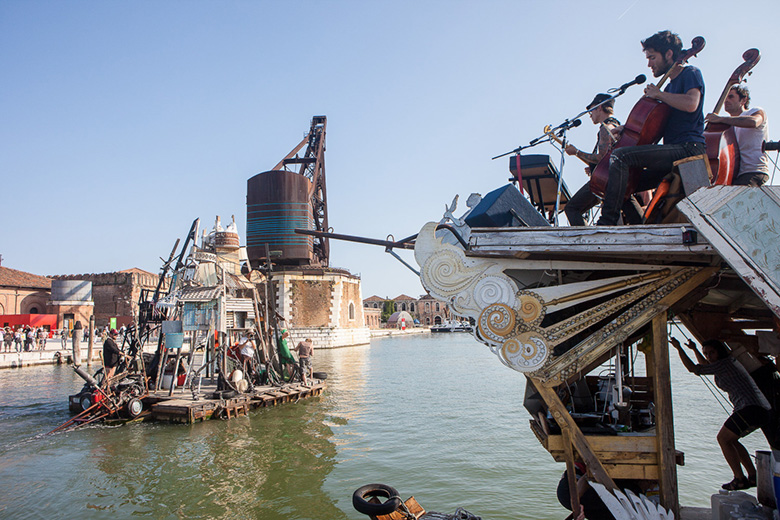 What’s a memorable experience from being on the flotilla?

One of the most memorable experiences was when a bunch of us cruised down the Grand Canal in Venice on our junk rafts. We had been denied permission to enter the canal six times, so we did it anyway under the cover of the middle of the night, and risked going to jail. The band Dark Dark Dark was playing live on the top of one of the rafts, so there was this spooky melodic soundtrack to our voyage down the middle of an ancient piece of history. It was a bit like stepping into a sliver of magical realism. 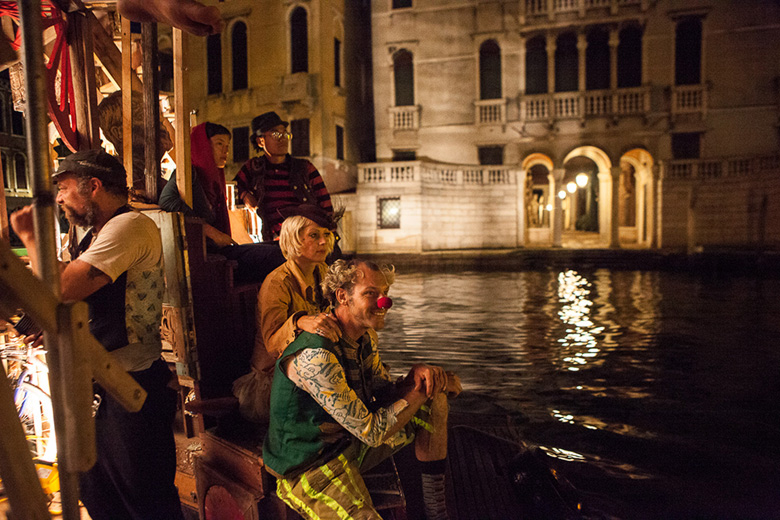 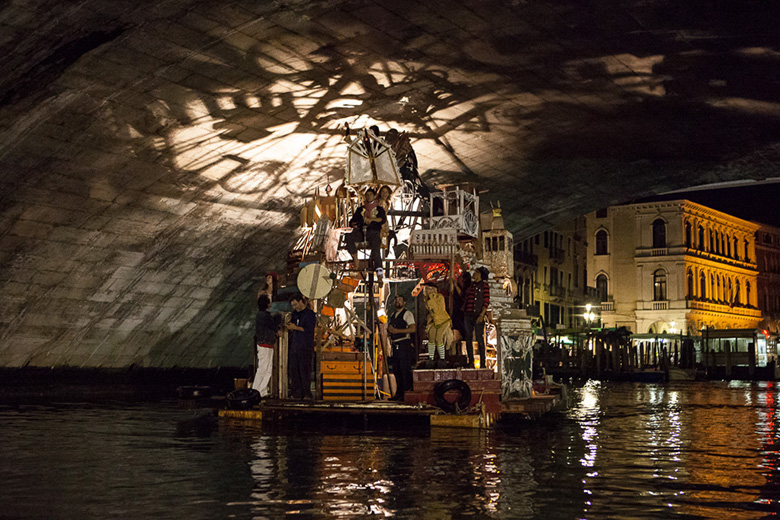 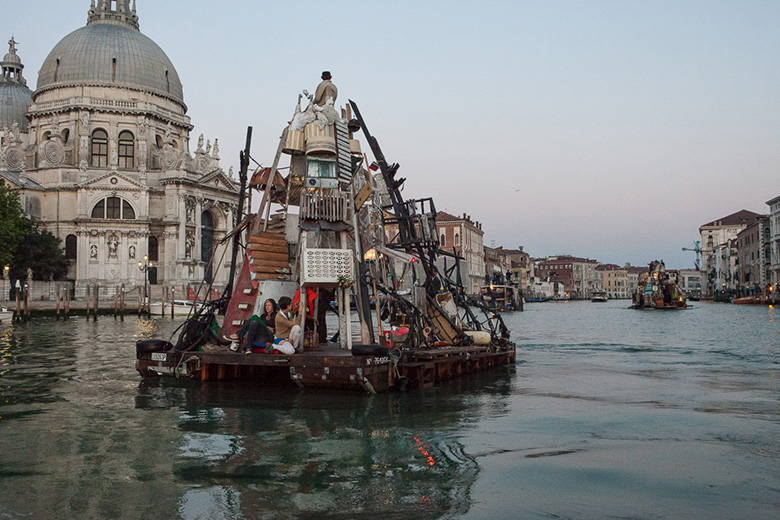 Were there times you didn’t want to get the camera out?

Not really, but there were a lot of times when I couldn’t get the camera out. If I was busy operating the engine in the back of the raft and having to be paying constant attention to the captain in case he needed a change to our speed, then I couldn’t be photographing. Other times I would be driving a boat, or dealing with dock lines, so it was not always photography first. 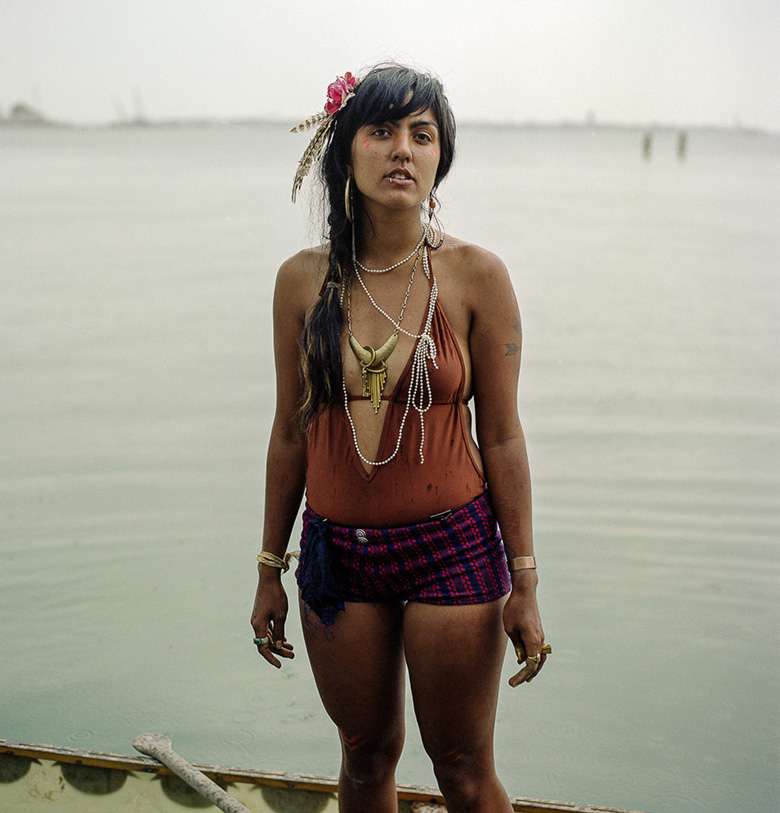 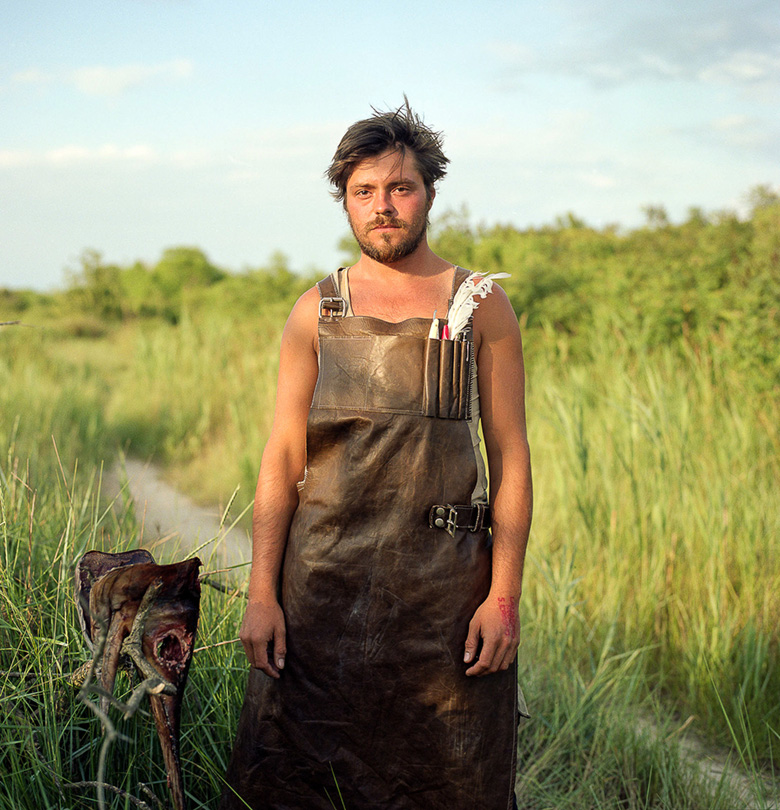 Was it hard going back to regular life after each trip?

It was very, very hard. 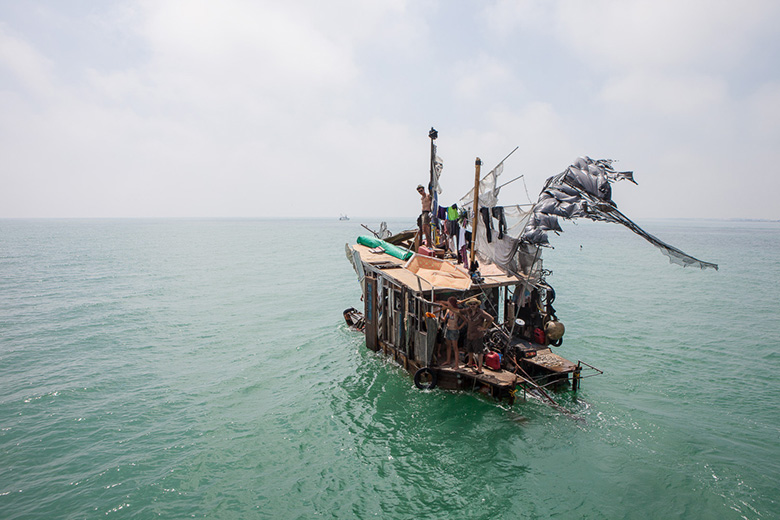 Do you have any advice for someone planning a similarly minded trip?

Find your people, dream big, be safe and read “The Happiest Man in the World” about Poppa Neutrino.

Interview by Megan Keene for The Adventure Handbook.

I could have sworn ive seen that ship on this website before? Its been my favorite thing ever since. I know ive posted it on reddit before and daydreamd about it a lot. Definitely one of the coolest things I've ever seen.

I would LOVE to do a home-built junk raft trip down the Mississippi River. It's actually been a dream of mine for over three years now.

I even went so far as to draw up a design for the raft. 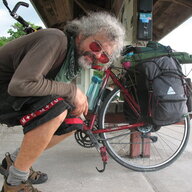 Beautiful Photography!! A 1000 years ago I used to babysit sailboats in Key West rent free.....
You must log in or register to reply here.