Deep down, I know I'm doing nothing wrong.

So why do I feel as guilty as a bishop in a brothel? I'm in a small French airport, striding purposefully in the direction of the X-ray machine en route home to Stansted.

In front of me is a uniformed security officer in her late-20s with a neat ponytail, serious-looking thin-rimmed glasses and a suitably French scowl.

Her face says: 'And what do you think you're up to?' She can't work out why I'm carrying absolutely no luggage at all. 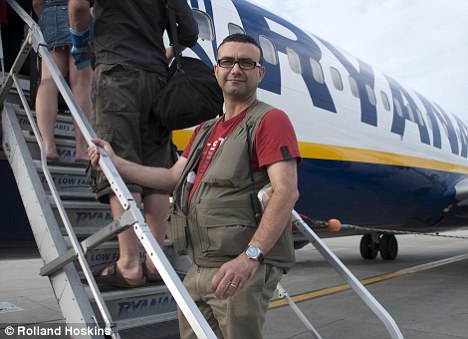 I initiate the conversation. 'But I am! Shall I show you my laptop?' I ask her.

She pauses, and looks me up and down. 'You have a laptop with you?'

Out come three T-shirts and two pairs of Y-fronts from a panel in the back.

Beneath the underwear is my computer, which has been nestling in a huge pocket.

The stern look departs her face with the speed of a jumbo jet taking off. She ushers over a colleague, gabbles quickly in French and they both laugh.

'She says you're wearing your whole house,' says the second security officer. 'Do you live in this jacket?'

I explain what I'm up to. I've been caught out once too often by Ryanair's sneaky baggage charges.

RELATED ARTICLES
SHARE THIS ARTICLE
Share
Passengers are only allowed to check in one bag, weighing up to 20kg at an extra cost of £30.

You will be charged more for any additional bags. Aside from this, the airline will only let you carry one piece of hand luggage and this mustn't weigh more than 10kg.

If it's heavier, you must check it into the hold and pay a 'checked-in baggage fee' which can cost up to £160 return.

The 'low fares' airline is expert at piling pounds onto the prices of tickets passengers who've failed to read and absorb every detail of its small print
So I've decided to beat Ryanair at its own game.

There are all sorts of rules about the bags you can carry but none that govern the clothes you can wear.

So today I'm wearing a jacket that has 17 pockets - into which I have stuffed virtually everything I need.

In other words, I'm wearing my luggage instead of carrying it.

The only limit on what I can take with me - without charge! - is the strength of my jacket fabric and the load my shoulders can take.

It's just a shame that I am doing it at the height of summer when it's 34C outside. The sweat has been pouring off me all day.

My new friend the security officer and her colleagues at Bergerac Airport in the Dordogne are very amused by my explanation.

Though that doesn't prevent one of them slipping on a pair of rubber gloves and emptying some (though not all) of my pockets for a closer inspection.

And though I've not quite been able to fit in the kitchen sink, I've also brought a pair of washing-up gloves and a rubber plug.

Oh, and I've stuffed a large canvas bag into one of the pockets. After all, you only need to wear the luggage when you're getting on and off the plane.

What's to stop you carrying it in a bag when you're mooching around the duty free? The security man finishes going through my pockets and finally waves me through.

My jacket and its belongings weigh 11.8kg - above the 10kg limit I'd be allowed to take in my hand luggage. But it doesn't matter.

There are all sorts of rules about the bags you can carry but none that govern the clothes you can wear
And, of course, if I'd wanted, I could also have taken a further 10kg in a take-on bag.

If I'd been carrying my belongings in a carry-on case that I'd put in the hold, Ryanair would have charged £100 for the return journey (incredibly, they have just put up their baggage fees for the peak travel season of July and August).

I was inspired to use the magic trick by Martin Lewis, the consumer campaigner who runs the popular website moneysavingexpert.com.

He suggested wearing a luggage-beating jacket and found one in the U.S.

But there's no need to go to there. I went to Hemel Hempstead, Hertfordshire, and bought a Royal Robbins Field Guide Vest, aimed at huntsmen and people on expeditions, for £60.

There are 13 pockets on the outside and four inside. There are strips of Velcro and fiddly zips everywhere you look - on my front, back and sides.

The manufacturer, on the other hand, says my jacket is 'perfect for observing wolves, compiling birding notes or observing sea turtles'.

During the first leg of my trip, flying out from Stansted to Bergerac, no one in authority raised an eyebrow.

Once I'd removed my computer and dumped my belongings in a tray, neither the X-ray machine nor the official behind it cared whether the canvas holding my possessions was bag-shaped or jacket-shaped.

As I got off the plane at Bergerac, I showed my outfit to a blonde stewardess. No, she had never seen anyone wearing something with so many pockets stuffed so full, she told me.

'But you do sometimes see people wearing four heavy jackets on top of each other so that they don't have to put them in the hold.'

Practical, but not hugely comfortable. Not that this would concern Ryanair's outspoken chief executive Michael O'Leary.

O'Leary, you might recall, wants to charge Ryanair customers to use onboard loos and has proposed a 'standing area' on his planes, with vertical seats.

You might think that he views his airline's passengers much as a dog perceives the fleas on its back. He knows they're on board and he'll grumpily tolerate them. But he doesn't much like them - and he doesn't want to do anything that would make them feel at home.

That said, we should be fair to Ryanair.

The low-fares airline, alongside fellow pioneer easyJet, has revolutionised air travel and certainly brought down prices in an industry that long felt immune from competition.

But does the airline always play fair with its customers?

Particularly those who are older and less internet savvy?

My jacket and its belongings weigh 11.8kg - above the 10kg limit I'd be allowed to take in my hand luggage. But it doesn't matter
It took me less than two minutes after my plane had landed to find someone who'd been caught out for doing nothing wrong beyond putting luggage into the wrong bags.

Matt Wilcock, a 27-year-old chartered surveyor, was travelling with his girlfriend and her mother, Judith.

She'd been stung with a one-way £80 'fine' because her luggage was 4kg over the limit. She'd already stumped up £40 each way for the airline to take her golf clubs.

Judith, an elegantly dressed woman whom one suspects is not given to public displays of rage, was furious.

'It is stupid and outrageous,' she told me. If she'd carried more of her luggage into the cabin, she'd have been spared the £80 fee.

Yet she was also angry with herself: 'It's stupid of us that we didn't read the small print.'

Richard Billingham, 51, is a merchant seaman who travels more than 30,000 miles a year.

He was brought up in London, but has lived for many years in Australia, so he's not schooled in the arcane world of Ryanair regulations.

On a trip from London to France for a few days, he and his wife ended up paying an unexpected £55 fee.

His ticket price was advertised online at £49.98 each, 'but once you'd added the tax, and the charges for checking in and for using a credit card and so on, the total amount came to £250.10.

‘And then there was this extra £55 we had to pay at the airport for a mistake we made with our baggage allowance.

Yet I also found happy customers - typically, young people prepared to travel anywhere at any time or professionals who have mastered the art of slimming down their luggage.

‘Ryanair is an extremely good airline if you understand how to use it.'

I agree, and with my ingenious jacket I think I've finally beaten the likes of Ryanair at their own game.

Hilarious. Takes me right back to the sweaty hours I've spent at Ryanair terminals with 6 layers of clothing on and tent poles stuffed down my trouser leg.
Each time I fly with them I play chicken by adding one more item to my packing list.

But as the guy says, god bless 'em. As long as I can fly from Gatwick to Italy for literally less than a night at a pub, I'm not going to complain.
•••

Tony Pro said:
As long as I can fly from Gatwick to Italy for literally less than a night at a pub, I'm not going to complain.
Click to expand...

Yep, this is really the thrust of the whole thing. SO glad to see some of these style airlines popping up in the US. I just got a flight from Pittsburgh to Las Vegas for $49. I get one "personal item" at 14"x18"x8". Scoping Europe was crazy. Even Stansted to Athens for $19 if you got on the right day...
•••
E

I closed my account
Ryanair doesn't really give a fuck (anymore?) anyways from my experience. Just don't go to the check in where they weight the luggage you are giving up, but do the online check in and go straight to the security control. They don't care how heavy your bag is, only what is inside it. They could check the size of your pack while boarding, but they usually don't bother anymore at this point, and they don't have weights there. Plus they allow you an additional bag since some time, so you got 10kg+this additional bag. Ah well I just realised that this article is old as fuck. They used to be way more strict back in the day, allegedely paying stuff extra cash for every bag too big or heavy they found.
•••
D

Kim Chee said:
It wouldn't take too many passengers looking like they are wearing a bomb vest before they rethink their luggage policy.
Click to expand...

i dont know why but this legit made me spit out tea laughing.
•••
You must log in or register to reply here.

Furry Nomads Nov 18, 2020
Daisy
Just some notes that turns into a rant.