Sidebar
Menu
Install the app
You are using an out of date browser. It may not display this or other websites correctly.
You should upgrade or use an alternative browser.
Featured News & Blogs 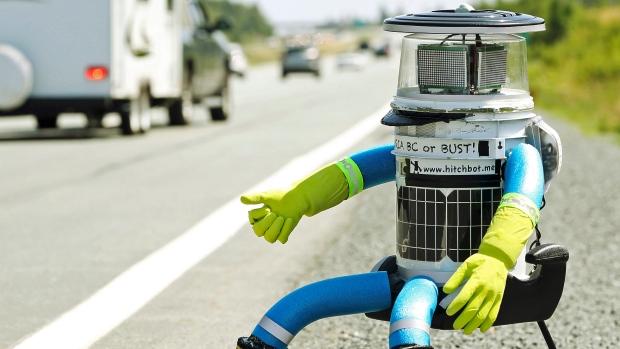 The anthropomorphic robot named hitchBOT, seen here during its cross-Canada trek in 2014, was destroyed on Saturday, two weeks into its attempted trip across the U.S., according to its creators. (Paul Darrow/Reuters)

The hitch-hiking robot that captured the hearts of fans worldwide met its demise in the U.S. The Canadian researchers who created hitchBOT as a social experiment say someone in Philadelphia damaged the robot beyond repair on Saturday, ending its brief American tour.

The robot was trying to travel cross-country after successfully hitchhiking across Canada last year and parts of Europe. It set out from Marblehead, Massachusetts, two weeks ago in July with the goal of reaching San Francisco, but never made it off the East Coast.

The creators were sent an image of the vandalized robot but cannot track its location because the battery is dead.

They say they don't know who destroyed it or why. But co-creator Frauke Zeller says many children who adored the robot are now heartbroken.

wizehop
Right and wrong do not exist, neither does God - in any form - for that matter...we are governed by the chemicals in our bodies....understanding freedom of choice and self accountability is the bottom line... All this I have learned from riding...
View all 6 featured items

I got an excerpt here from the "parts of europe link", linked in your article... um from it's creator.

He hoped the project would spark introspection about how society works: "What kind of people are we? Are we kind? Do we live in a safe world, you know for the most part? What are the possibilities for these kind of artificial agents in the future?
Click to expand...

I can see this coloring peoples opinion of the US. At least for the scientists/researchers in Canada who ran the experiment.

@wizehop let me extend my apologies to Canada. On behalf of the US population I am sorry Canada. We should be ashamed of ourselves.

Despite my attempt at humor above, this is actually exactly what pisses me off about people. The reason I both hate and fear nearly every person I encounter. There is pure, selfish evil in the human race.

One could technically call me a racist...I despise the HUMAN race.

what the hell. Stupid @#$$%% It's a fun kinda thing and ya had to go destroy it. Hope these people send another one out.

I deleted myself
I'm kind of surprised the cops didn't think it was a bomb, call EOD and blow it up.

Knowing how they have a serious problem with hitchhikers and all.

This is exactly what I fear will happen to Sam on his journey.

But...being as some people are pieces of shit, you take that chance.

Waiting for the rain to subside here, before Sam can start his journey.

Will keep y'all posted.

@7xMichael never thought about that aspect - being there seems to be a shoot and ask later at times.

Well that's legitimately disappointing though I believe their social experiment was a success. It definitely goes to show what kind of people there are in this country. Bunch of destructive asshats...
D

I deleted myself
Search and Destroy..... that's what Americans do..... search and destroy.

I heard about this first thing this morning and I'm getting madder and madder as the temperture goes up.

No, I hope they don't send another one here, what for - so it can be also destroyed like this one??

If pictures were sent they should be able to track down who killed the robot.

OTTERWOLF said:
Search and Destroy..... that's what Americans do..... search and destroy.
Click to expand...

Please don't generalize in that way. We don't know what happened. And IMHO it has nothing to do with "Americans" or "Canadians" or whatever. It only needs one single fucking asshole to do that. And assholes can be found in any country of this planet.

Some people just have no respect. I wish I could talk to the people who did this just to find out what there problem is. I hope this doesn't happen to sock monkey.

Kal said:
Some people just have no respect. I wish I could talk to the people who did this just to find out what there problem is. I hope this doesn't happen to sock monkey.
Click to expand...

Anagor said:
Please don't generalize in that way. We don't know what happened. And IMHO it has nothing to do with "Americans" or "Canadians" or whatever. It only needs one single fucking asshole to do that. And assholes can be found in any country of this planet.
Click to expand...

it definitely *is* americans though. i mean the damn thing made i across canada and europe and the minute it gets here it gets destroyed (after two weeks of going almost nowhere). i think that says a lot about american society.
D

I deleted myself
I've never hurt a human and am anti violence. But fuck that robot
S

I deleted myself
The first salvo fired in the fast-degrading human-automaton relations in America.

Probably got murked by a bunch of traincore kids that hate hitchhikers. Heh.

I deleted myself
Rubber gloves on a robot is the sexiest thing I've seen in a long time.

Make another, fill its backpack with KY and program it to sell hannies.
You must log in or register to reply here.