OK - this looks like an adult playground!!!! Wonder how it handles in a storm - but this is very cool. And DO pick up on the 30 lb rats they have issues with.

Found a couple of sources of info on this - but this article was more extensive. There is a long vid at the link too - kind of a picture documentary - but with more up close pics of the structures. There are other youtube vids that are older though and do not include the many added-on buildings as seen here.

They were also featured in a segment on the Travel Channel - Extreme houseboat - at this link.
http://www.travelchannel.com/shows/extreme-houseboats/video/freedom-cove
_______

This is how to REALLY get away from it all: Family live on an incredible pink and green self-sustained floating fortress miles from civilization
By KELLY MCLAUGHLIN FOR DAILYMAIL.COM

The magenta and turquoise floating structure, off the coast of Tofino, British Columbia, was built in 1992, and the couple, who have two children, live in the home year round. 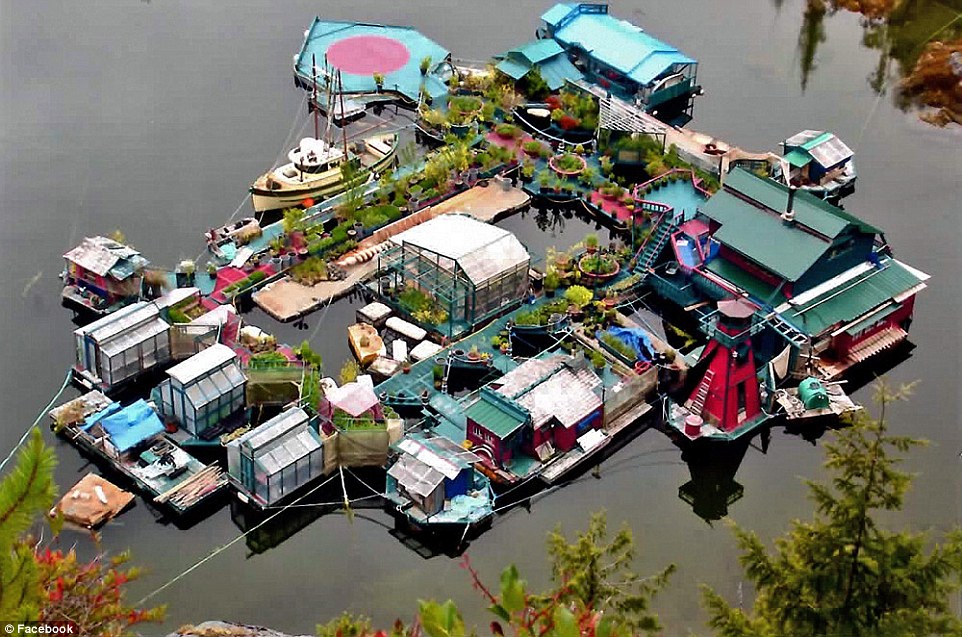 Wayne Adams and Catherine King live in their turquoise and magenta float house off the coast of Tofino, British Columbia 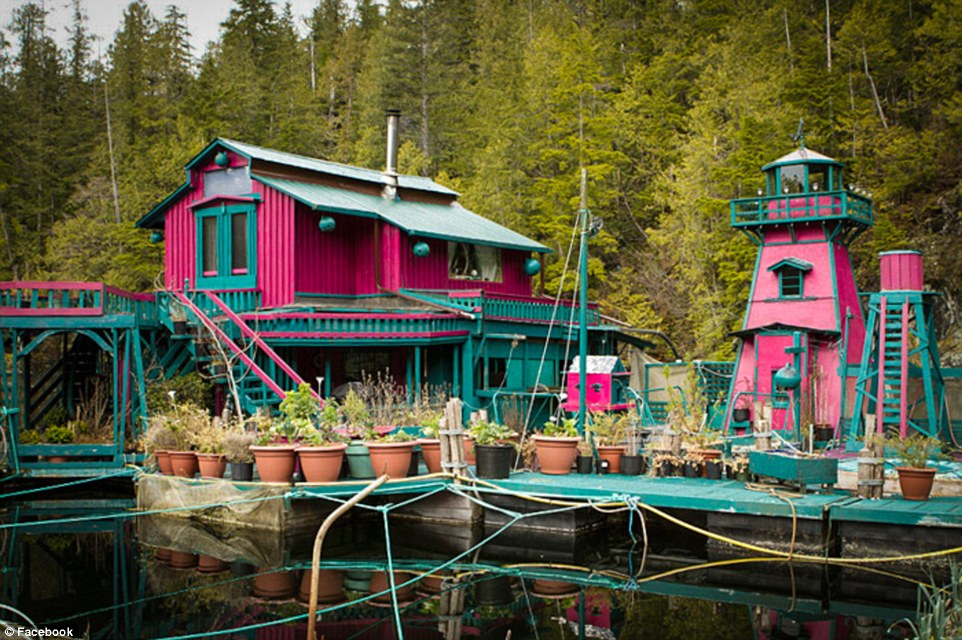 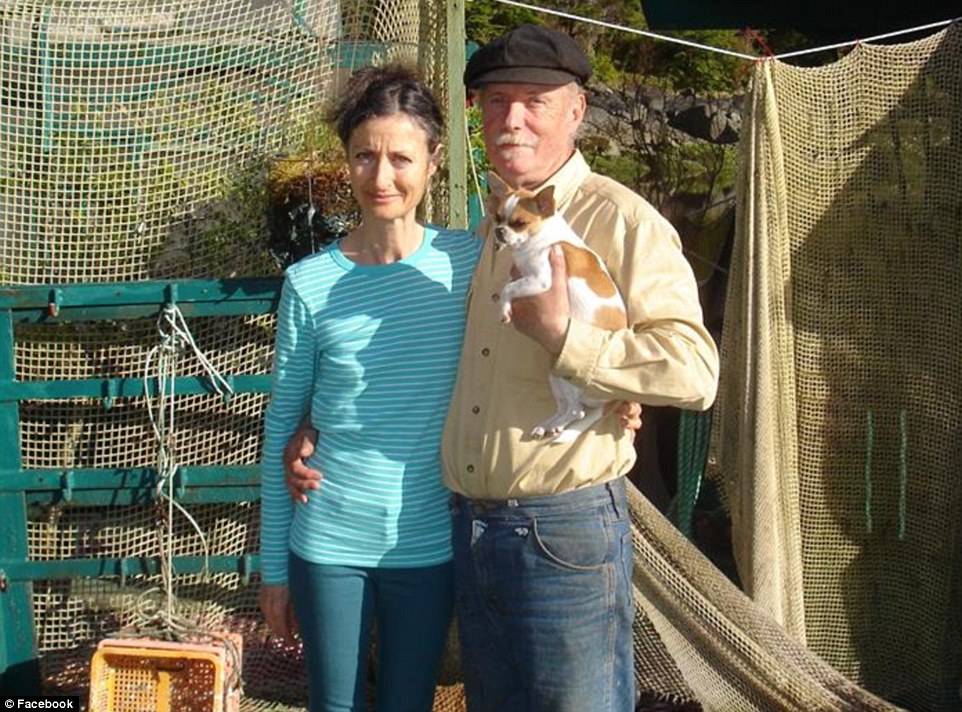 King (left) and Adams (right) have lived on the structure for more than 20 years. Between King's love of gardening and Adams's passion for carving the pair have created quite the artistic euphoria in their floating home

During winter months, the couple collect rainwater for drinking and in the summer they collect drinking water from a nearby freshwater waterfall across the bay, according to Collective Evolution.

They have several greenhouses in which the family grows fruit and vegetables year round. Electricity is supplied to the home through solar panels and photovoltaic energy generators.

The home also has a lighthouse, a myriad of pots filled with plans and flowers, and a collection of art made by its artistic owners, according to Tofino Time.

A hen house also used to reside on the structure, but the couple decided to give up on livestock when they realized how many predators had easy access to the hens.

The couple told Tofino Time that the floating home they've lived in for more than 20 years has been an on-going and ever-changing project since it's beginning.

Meet the couple who live on floating Utopia Freedom Cove 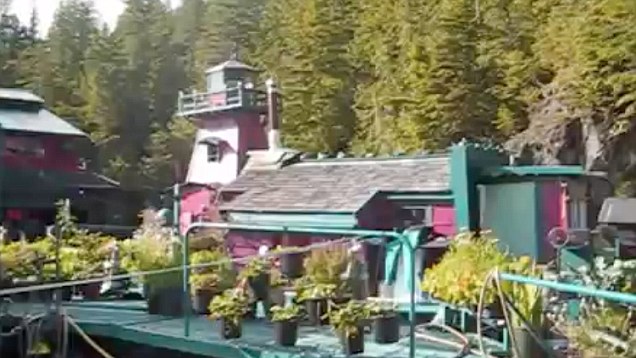 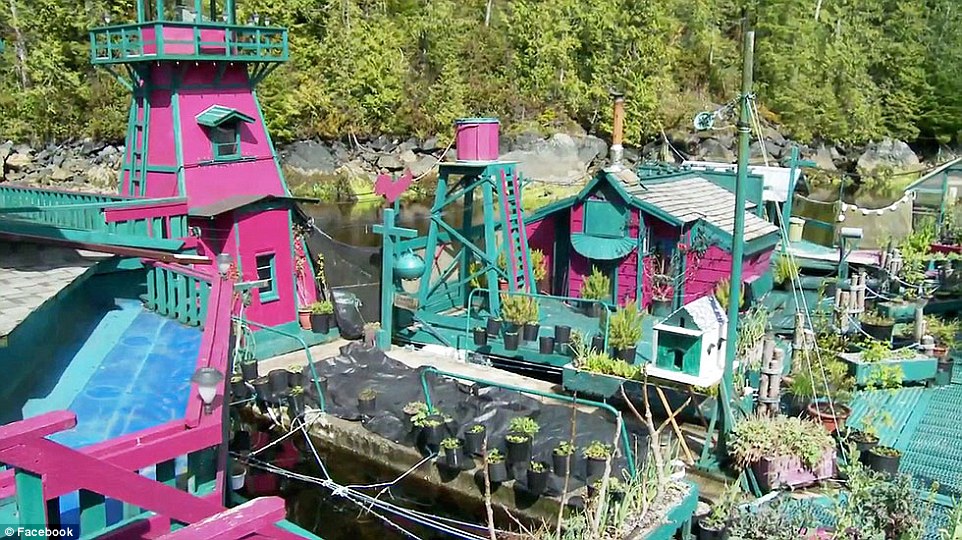 The home is self sufficient, with solar panels providing electricity and the couple gathering water from nearby freshwater sources. They also grow fruits and vegetables in their greenhouses 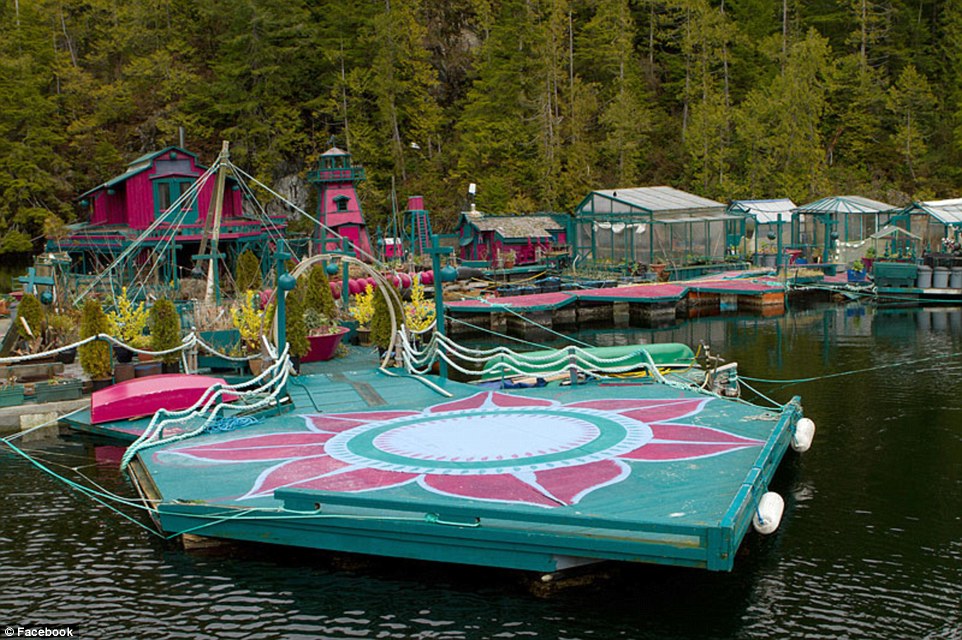 The structure is off the coast of Tofino, British Columbia, a town on Vancouver Island of a little under 2,000 residents. King and Adams said that their home is an ever-changing project 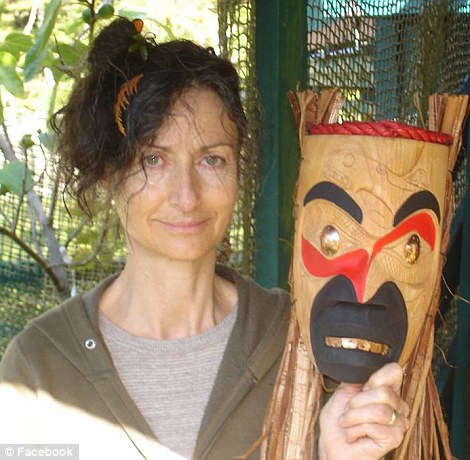 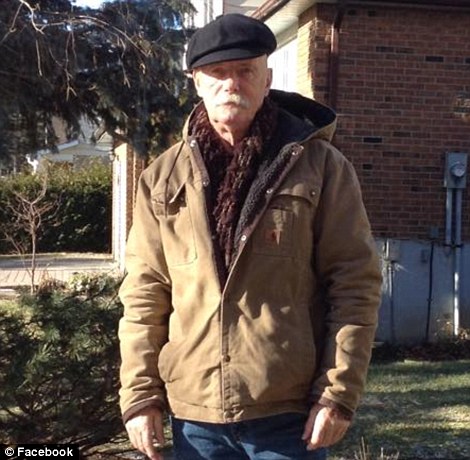 King and Adams have had artwork, primarily made out of fossilized ivory, mammoth tusk and wood, showcased in a number of art galleries and shops. Many of their carvings are sold in Tofino, which is about a half-hour boat ride from their home

Adams and King, who is a former ballerina, live in a lively ecosystem with deer, wolves, otters and numerous coastal birds, according to the Plaid Zebra.

One type of animal in particular - 30lb rats - seem to be the couple's biggest problem. Wayne said that the creatures often gnaw at the foundations of their floating home.

But that doesn't keep the couple from doing the hobbies they love - making art and maintaining their beautiful gardens. Adams is primarily the artist in the family and King gardens.

King did, however, apprentice for Adams in carving and eventually grasped the art and grew to create her own style, according to Vanguard Divers.

Their carvings, which are usually formed out of fossilized ivory and mammoth tusk, but wood and other materials as well, have been displayed in shops and museums across British Columbia.

Many of their carvings and candles are on sale in the town of Tofino, which is about a half-hour boat ride away from their home.

King and Adams love visitors and give tours of the home to those who want to learn about the couple's journey of self-sufficiency. 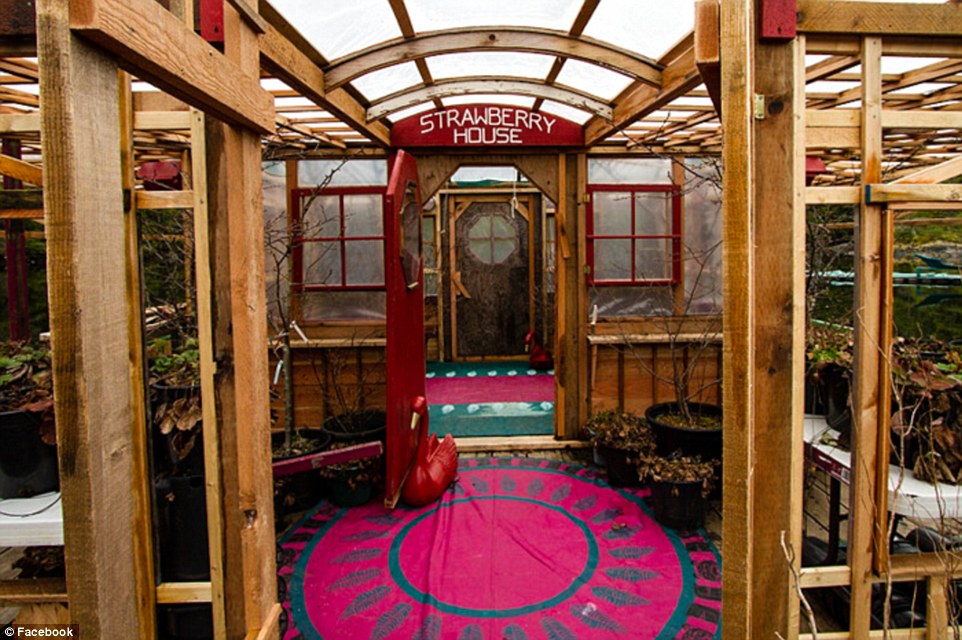 Adams and King constructed the home in 1992 and make and sell carvings and candles in the town of Tofino, about half an hour boat ride away 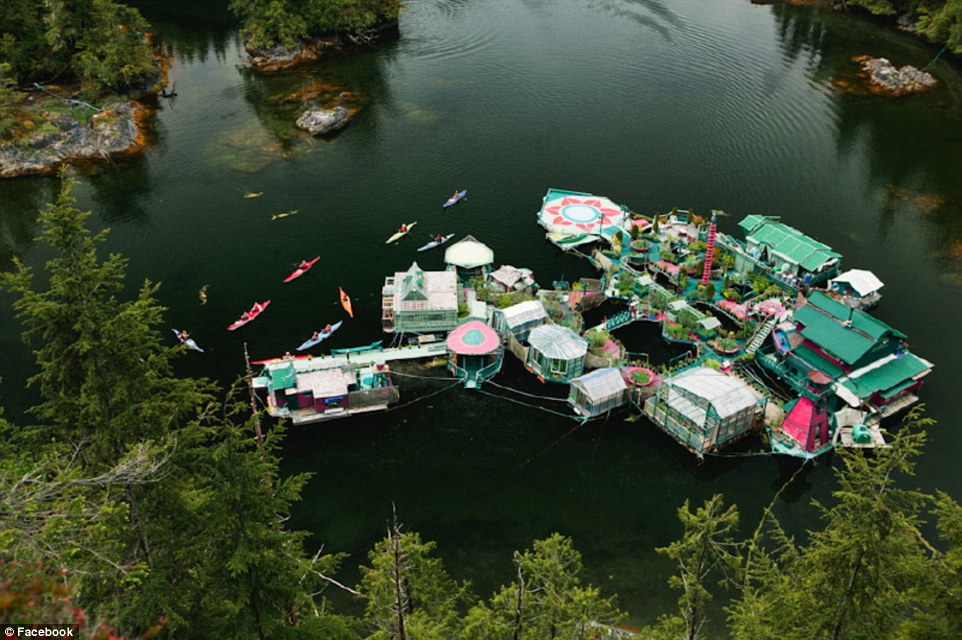 I closed my account
Great story, sounds like they created a couple nice little income streams to keep things going.

I'm not buying the 30# rat thing, either it is a story to keep trespassers away or they're the only two Canadians who don't know what a beaver or possum is.
•••

Ya its cool and all, but I'm sure they have enough money to afford freedom. That places doesn't look cheap. That being said in Cambodia they have floating villages where Vientiane immigrants who cant afford land live on little houseboats. The store is on one boat, school on another, and so on, its pretty cool.

All that being said I could see having a small floating house on a river as a realistic way to live free. Up-keeping the above floating mason seems like a bit much.
•••

Yeah that would be about the size of a beaver wouldn't it? And technically, they *are* rodents... lol Then again, this is the Daily Mail, always take with a grain of salt.

I don't think maintenance would be that difficult. This is the Pacific, on a temperate climate, with plenty of both sun and rain. Plus they have the tours and the artwork as a revenue stream, and they grow much of their own food.

THEY HAVE NO REAL BILLS Y'ALL. If that isn't freedom, I don't know what is. Now if only they could avoid or not have taxes as well that would rock.
•••

I could live there, especially seeing as they probably get surf in Tolfino being on the west side of Vancouver island.
And I know it gets gloomy there in the winter, but ugh! that color pink...I don't think I could live with that.
•••

wizehop said:
All that being said I could see having a small floating house on a river as a realistic way to live free. Up-keeping the above floating mason seems like a bit much.
Click to expand...

someday when i'm not moving around so much i want to have an StP headquarters for people to come by and stay at. i'm going to catalog this into my list of ideas

7xMichael said:
I'm not buying the 30# rat thing, either it is a story to keep trespassers away or they're the only two Canadians who don't know what a beaver or possum is.
Click to expand...

Thirty lbs is an exaggeration... could be beaver... but its possible they are dealing with muskrats... 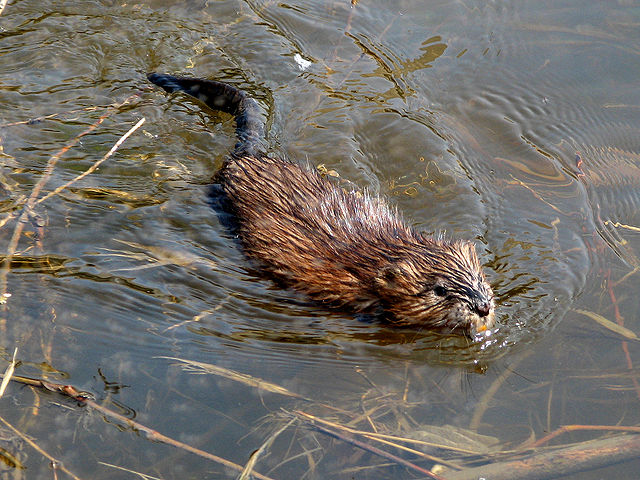 
Knew reading all those little house on the prairie books would pay off someday...

""The Royal Canadian Mounted Police winter hats are made from muskrat fur.[27]""
•••
You must log in or register to reply here.

K
DIY Island Offshore and Off the Grid

Why I Choose to Live in Wayne National Forest