Toggle sidebar
Menu
Install the app
You are using an out of date browser. It may not display this or other websites correctly.
You should upgrade or use an alternative browser.
News & Blogs Featured

Interesting story about some folks squatting in London! 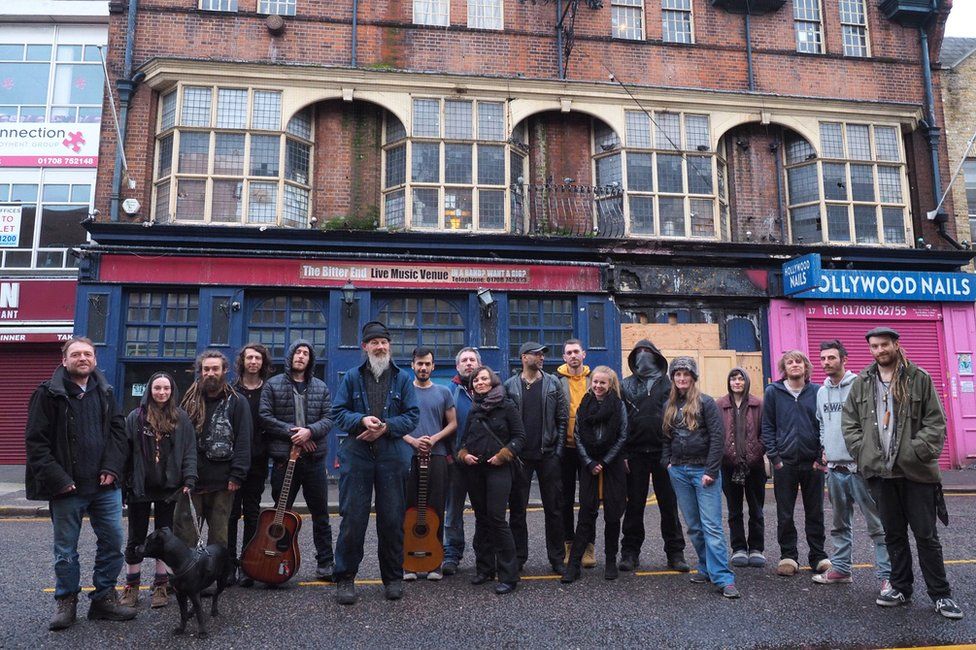 Activists and squatters have moved in to a derelict Romford pub, The Bitter End, with the aim of transforming it into an independent environmental and cultural space. In April, photographer Ed Gold spent three weeks living alongside them, documenting their lives as they worked to regenerate the building into the newly named The Better End.

"The history of the building goes back as far as 1426, when a timber framed pub stood here, which burnt down in Victorian times," says Gold.

"It was rebuilt. And the 40-room building became a brewery, sauna, gym, snooker hall and then a pub again.

"When the squatters moved in, it was in collaboration with ReSpace Projects, a not-for-profit organisation who have regenerated other empty urban buildings.

"After consulting with the owner, more than 20 'caretakers on rotation' from the UK, Germany, Eastern Europe, South Africa, Jordan and Australia have been renovating the premises for community use, such as an art gallery, market, workshop space, independent cinema and a community fair that encourages local productivity.

"The caretakers here aren't told what to do but take it upon themselves to renovate areas daily in the fields they are good at, like electrics, carpentry and plumbing." 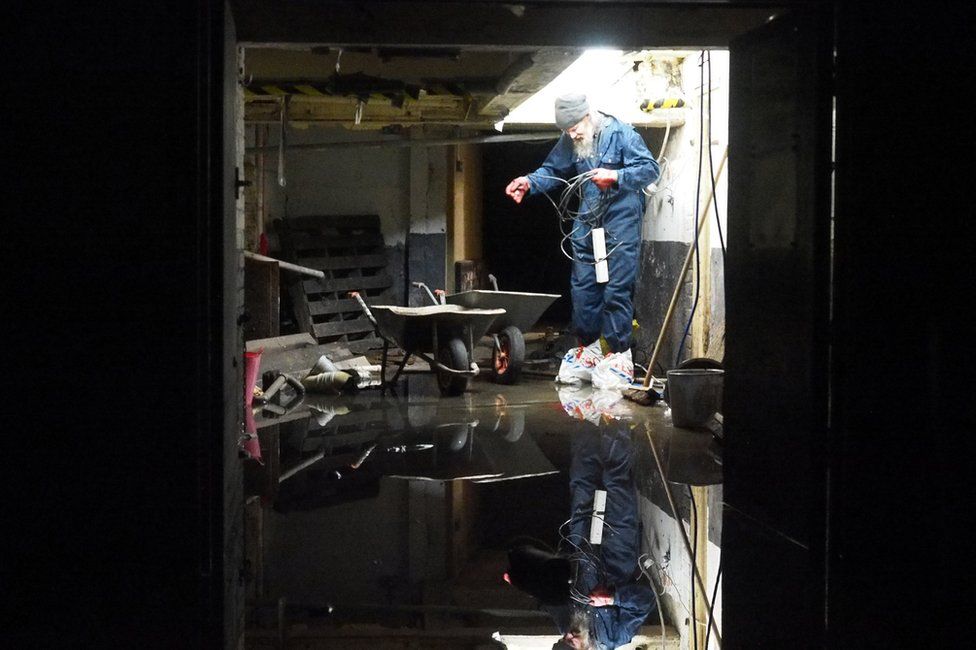 Ned, 53
"I've been here a month in this particular project.

"But I have 30 years' experience in community projects.

"The basement is flooded so I'm clearing the floor to gain access to the sump pump, which has stopped working, to drain the basement.

"The water is a combination of a small number of leaks in the building.

"We have health and safety requirements to meet.

"They want to make sure we are safe." 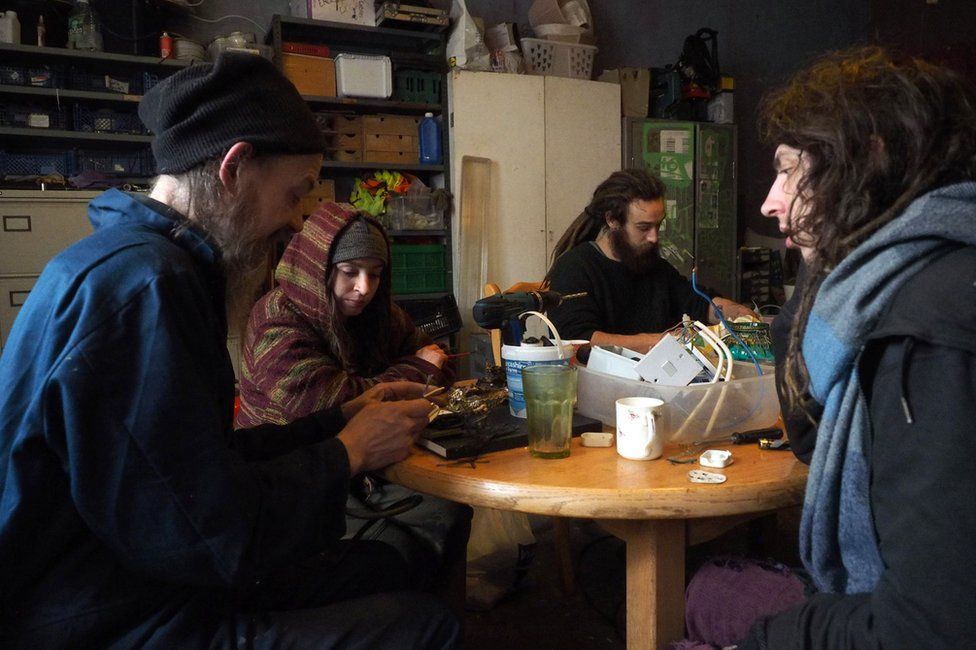 "We are setting up schools in these types of buildings to teach people how to be self-empowered.

"We're teaching everything that people can bring home and use in their own lives.

"The younger members can then take these skills to other communities they might find themselves a part of and also have the confidence to teach.

"The ethos of the building being to invite craftsmen in to share their skills and empower others." 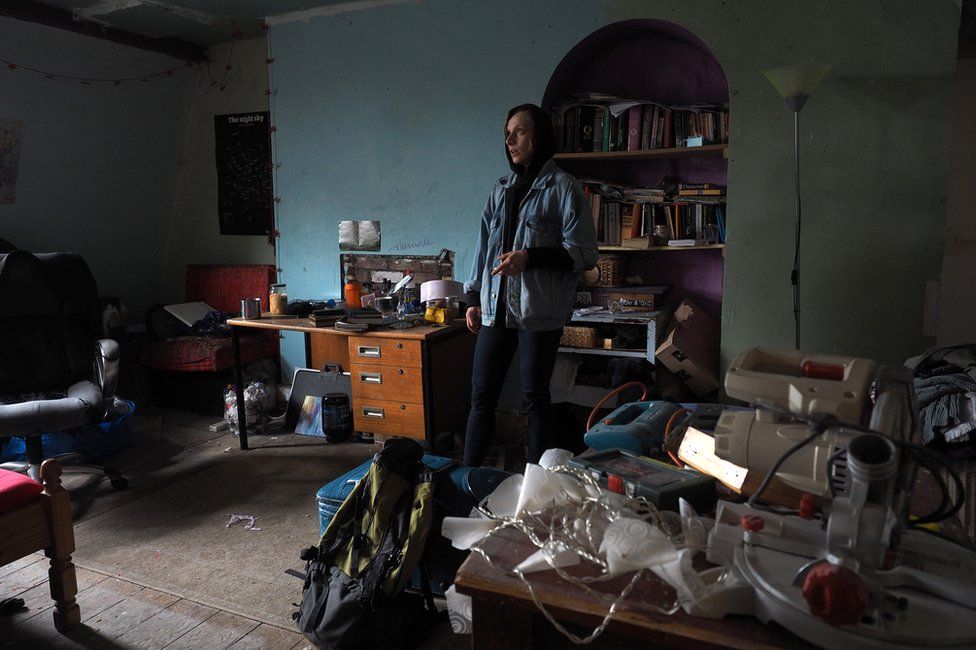 Kasia, 35
"I'm from Poland. I came over almost 14 years ago for friendship reasons rather than economic reasons. I didn't squat in Poland.

"I was living in London for so long on my own, working, studying.

"I used to be a carer. And it was fulfilling to do something useful even if on a small scale. I became disillusioned when I realised that I was unable to sustain myself financially.

"The less I have, the better I feel. I am very comfortable without having to stress about gathering things.

"I have no problems with detaching myself. It's more important to have good relationships with people and yourself.

"When we first got here, there was only four of us and we lived outside under shelter on the ground floor.

"When we got here we found excrement and a lot syringes. The building was in a derelict state. Random people had come here and were destroying it." 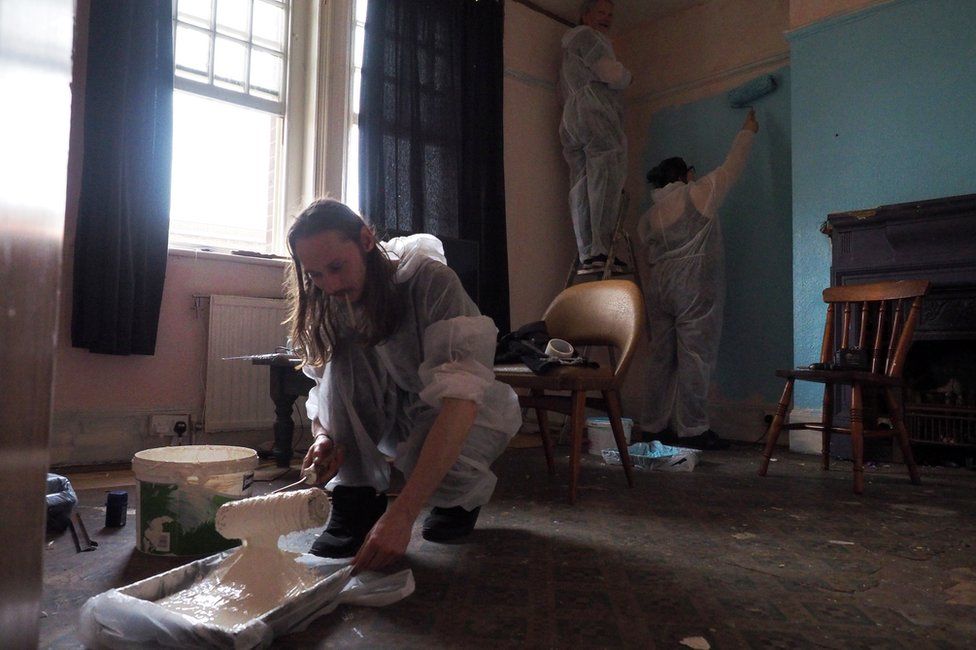 Tyrone, 28
"I've been homeless before, but I never squatted.

"My other half and me decided it was actually cheaper me moving out than me living there with her and my daughter.

"With what I was earning, it was cheaper to move out. So, we decided I'd come here but we'd stay together and live separately.

"I'm a handyman here, anything with a drill. I'm redoing the toilets, a lot of concreting, floorboards, painting and decorating. Probably everything in the house, I've done it, hung doors, stuff like that.

"I like the idea of something that is not being used and breathing life into it, as too many places are being wasted." 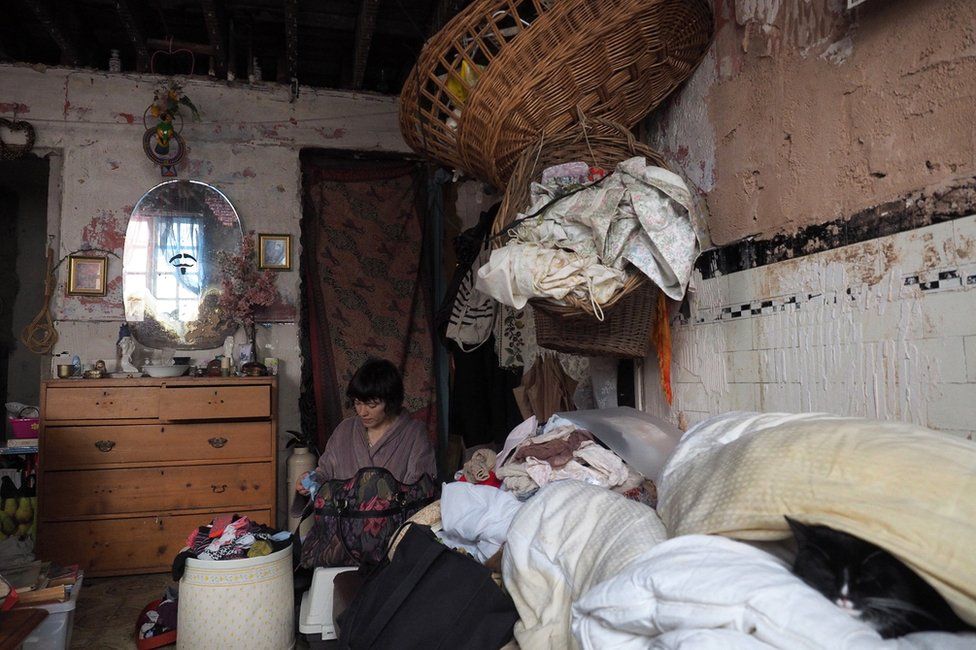 Emily, 25
"I'd moved to London in 2010 to study geography at LSE. In the first two years, I was in student accommodation and it was eating up all my money. I looked into other options and researched squatting in London.

"I want to be nomadic because there is so much of the world to see and I'd like to settle for months at a time in different places, to get involved in community projects." 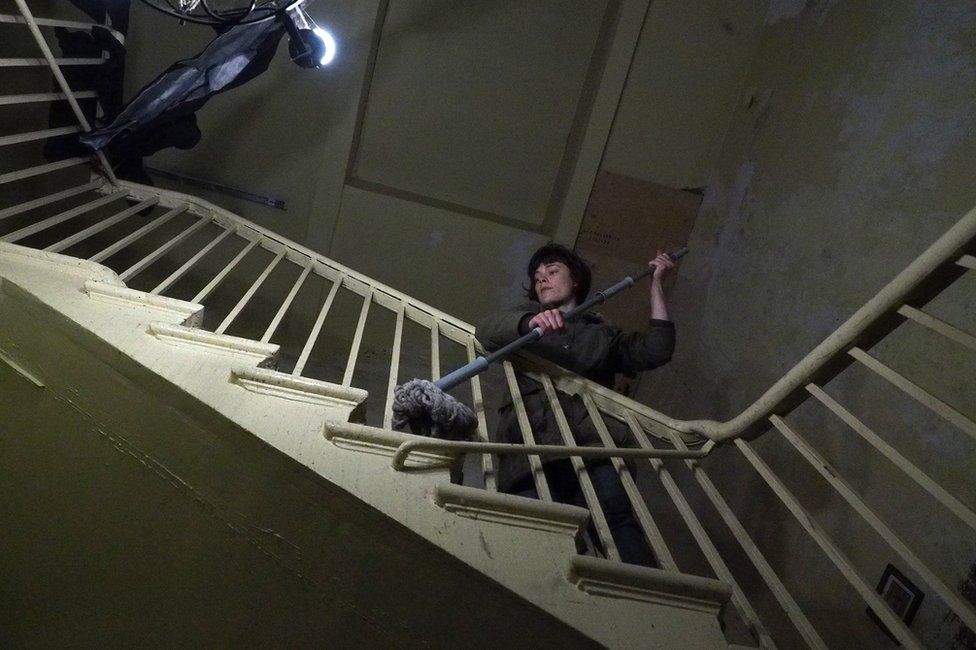 "I've been here about a year and a half on and off. It's been hard. The conditions the first time we got here were very challenging. I've enjoyed fire safety, which has been a major concern. And I've got into plastering, taking out rubbish and recycling, gardening, making the outside space look nice, and decorating.

"I like the beautiful historic building itself, which is in need of a lot of love and attention, the creativity with it, and knowing the people very well who I have lived with for many years in various places, as well as meeting new people locally and from other projects." 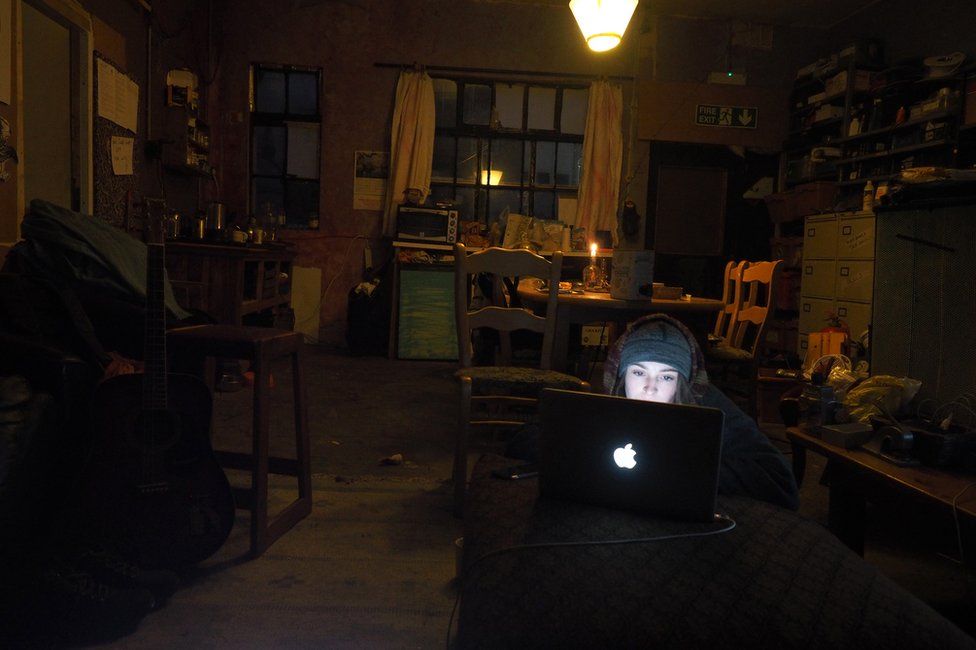 Ceilidh, 20
"I came to squatting since moving out of the woods, where I went straight from home.

"There is a 10-year and seven-year age gap. So, it was hell living with them, especially when I was turning 13 and coming into puberty." 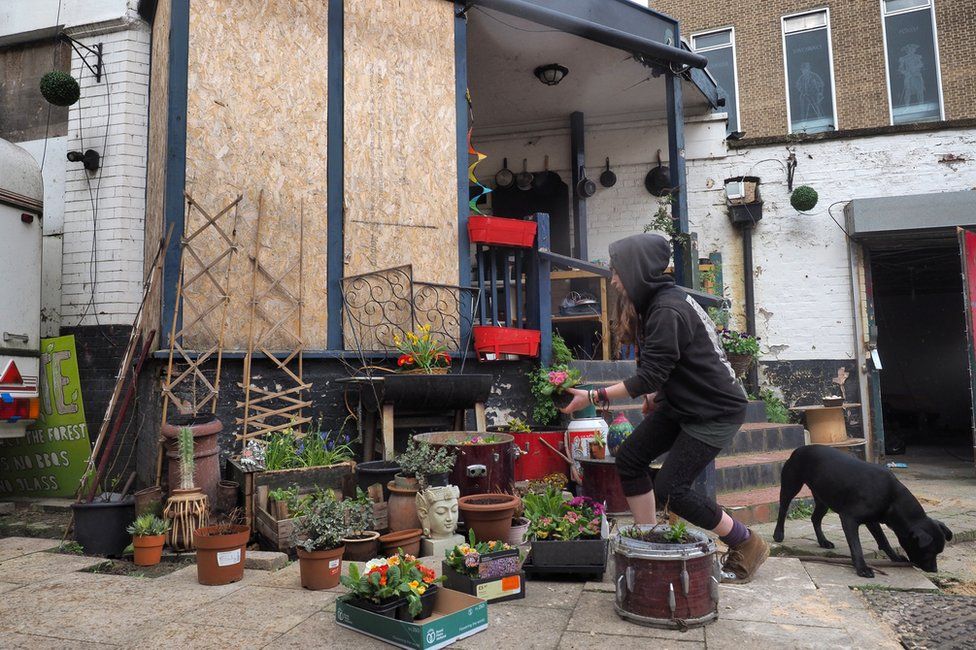 "I absolutely adore it here, this way of living. The one thing I didn't have at my mum's was much conversation as she was always at work and my sisters were at school.

"I want to be the person that people come and ask me how to do stuff rather than me ask what to do next." 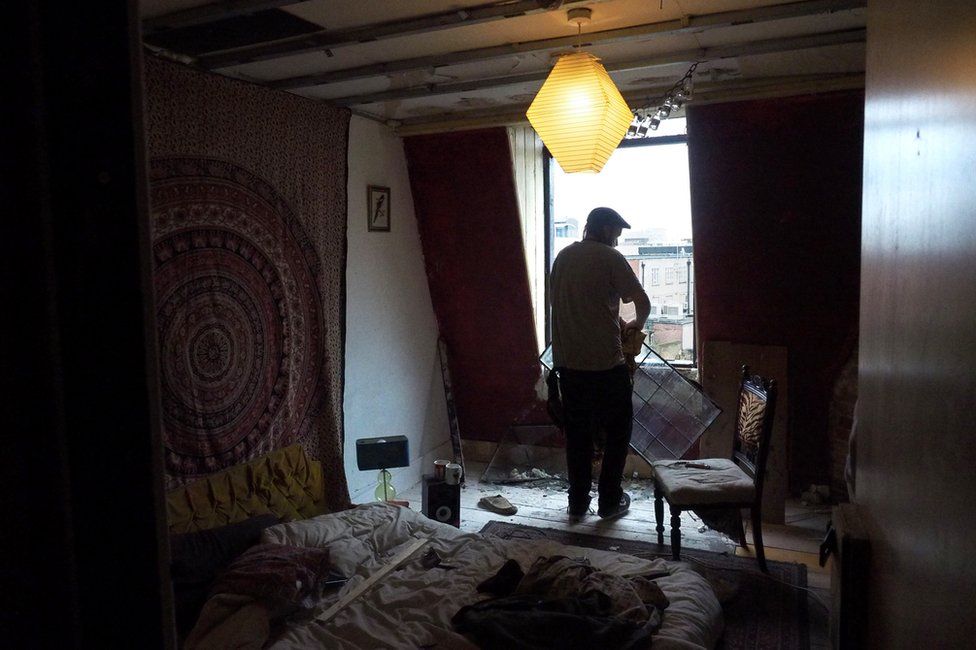 Big Charlie, 28
"I couldn't get housing benefit as I was in the wrong age bracket. They told me to go share. And that was already what I was doing. I wasn't getting enough hours in my job to pay rent. So, I packed a backpack and just left. I went from a pub upbringing to losing a job in a pub. So, now is like getting a second shot.

"There was a fire after the pub closed because of trouble and drugs. And the company didn't want to pay for security for the building so agreed to let us stay here. They liked the idea that we come in and clean the place up.

"I want it to be about the local people that have lost their local venue and a place to go.

"I want a place for people to come and do yoga, to converse, to do mechanics, for all the people that don't have a creative place to feel that they can come to this place and use here." 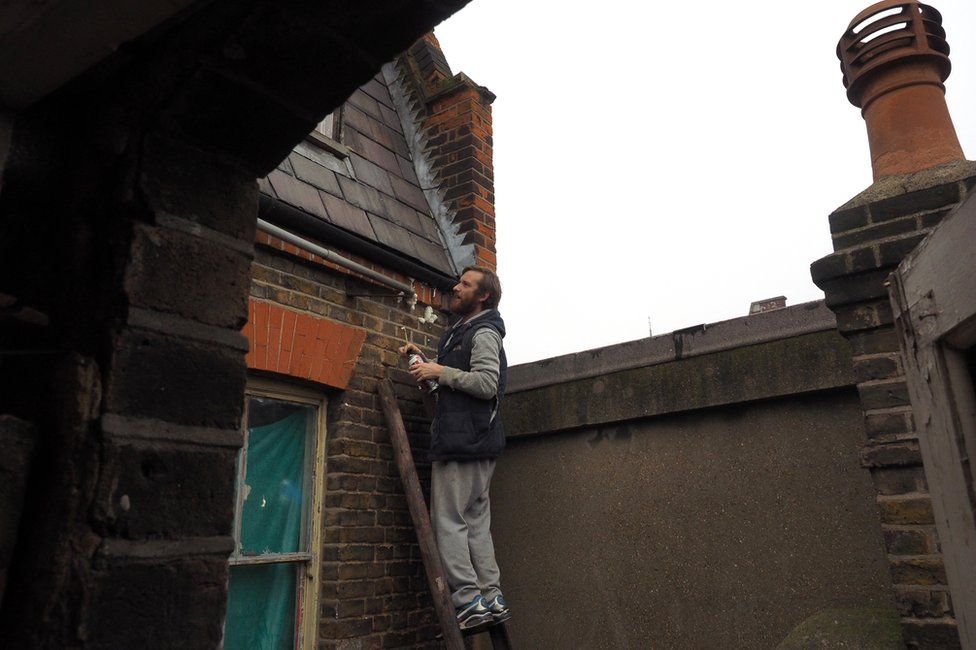 "I have kind of known people and social groups that have been involved in squatting for ages, but I have never squatted myself until now.

"I don't think that anybody anywhere in the world should be homeless, especially as there are so many empty homes.

"I know it's not as easy as just putting people in homes. It's more about the way the government treat people with mental health issues." 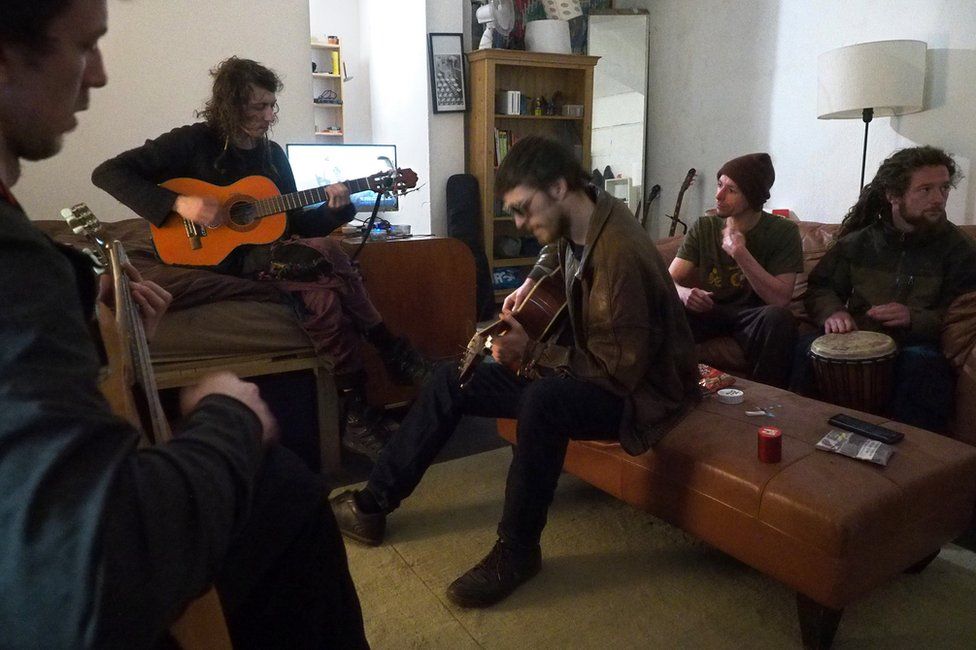 "I'd been trying to manifest a life where I could utilise my carpentry skills and incorporate music into that as well and have a good balance of the two.

"The less stressed in life you are, the more creative you are going to feel."

MolotovMocktail
Artist/writer/traveler/etc. I'm a mod on this site so don't hesitate to send me a PM if you have any questions! [B]Please do not PM me about train info. It is not my area of expertise.[/B]
View all 8 featured items
You must log in or register to reply here.