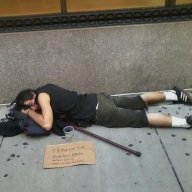 The SHADOW, New York's only underground newspaper publishing on the Lower East Side since 1989, along with Wombat in Combat, is presenting a free
punk show in Tompkins Square Park, featuring bands and performers that
...have been in our scene from the beginning as well as newer bands. We will
also have tables with political action groups, alternative media, and
more. We'll also have several guest speakers who will entertain and
provide the historic context behind the show.

These shows commemorate the 23rd anniversary of the infamous Tompkins
Square police riot of August 6, 1988, in which hundreds of "New York's
Finest" from all over the city descended on our neighborhood,
indiscriminately clubbing anyone in their sights in furtherance of a
non-existent midnight park curfew.

These shows also celebrate the vitality of the political activist and
counter-cultural scene that has survived on the Lower East Side, despite
the gentrification, soaring rents and lost venues that have contributed to
the cultural genocide now taking place in New York City.

Shaggy Rogers
Georgia is now lockdown. Let's see if my dumbass neighbors will go out for their drugs.
Today at 5:29 AM •••

dumpsternavel
Self sabotage
Yesterday at 11:06 AM •••