Wes Modes is documenting life along America’s waterways.
BY JONATHAN CAREY
MARCH 07, 2019
https://www.atlasobscura.com/
An Artist, a Shantyboat, and the Lost History of American River Communities 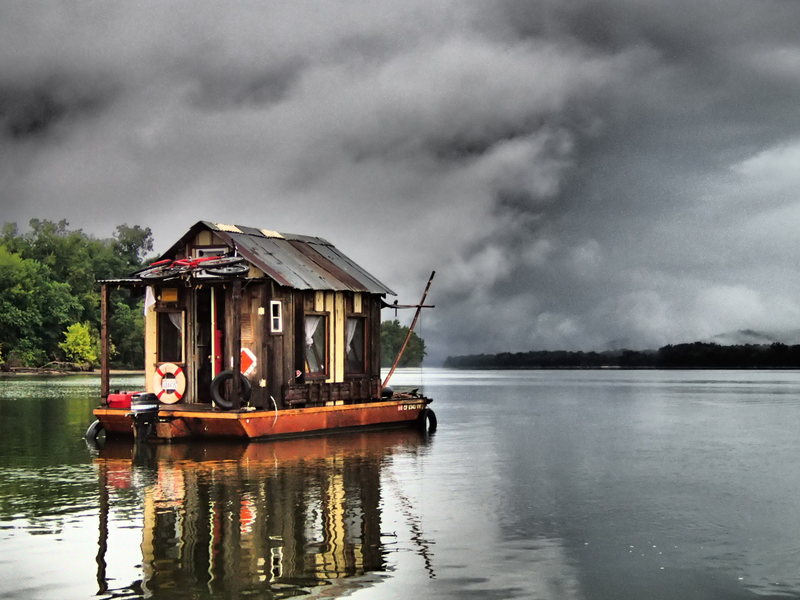 THE RIVERS OF THE UNITED States have a certain lore and mystique within American culture. During the late 19th and early 20th centuries, these roaring waterways were home to thousands. Entire communities existed on or near the water in self-made houseboats. The history of these communities has been explored briefly in river memoirs such as Harlan Hubbard’s Shantyboat Journal, but hasn’t been thoroughly examined in a present-day context. That is, until a modern shantyboat came bobbing down the Mississippi in the summer of 2014.

Wes Modes was at the helm of that vessel. Modes is a lecturer at the University of California Santa Cruz. He is also the primary force behind “A Secret History of American River People,” a project aimed at capturing “the lost narratives of river people, river communities, and the river itself.” Modes, an artist by trade, has spent the last six years traveling the Mississippi, Hudson, Tennessee, and Sacramento Rivers during the summers, creating a moving museum/work of art, while also documenting the oral history of American river culture and people’s connection to the water. 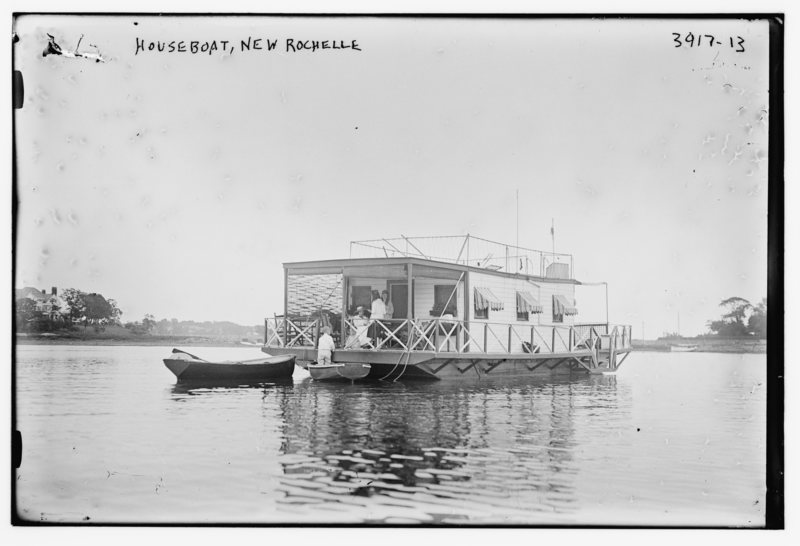 A houseboat in 1915. PUBLIC DOMAIN

Modes has always had an affinity for exploring America’s transportation arteries. During the 1990s, his primary interest was train-hopping. “I really enjoyed going through and seeing the unvarnished backyards of America,” says Modes. It was the sight of rusty worn cars and tumbled fences that intrigued him the most—not for what they presented to the world on the surface, but for the story behind these places and objects. When he heard about some friends floating down the Mississippi in homemade boats in 2004, he loved the idea and stewed over the concept, until “punk rafting” was born.

On nothing more than a piece of plywood atop of inner tubes purchased at a tire store, Modes and a few companions floated along the Missouri River in 2005. “It seemed like a natural transition from train hopping to river rafting,” says Modes. He grew up on the tales of Huckleberry Finn and wanted to mirror the classic journey, drifting down an American river on a makeshift raft.

Modes made punk rafting a summertime staple. But these trips were much more than mere excursions. They were the foundation of something much larger.
Related Stories

One evening after a rafting excursion in 2012, the team was at their camp—affectionately named “Camp Tipsy”—when Modes and his comrades began discussing how to build a floating cabin, something that they could escape to while out on the water. Thus the idea to build a shantyboat was born. 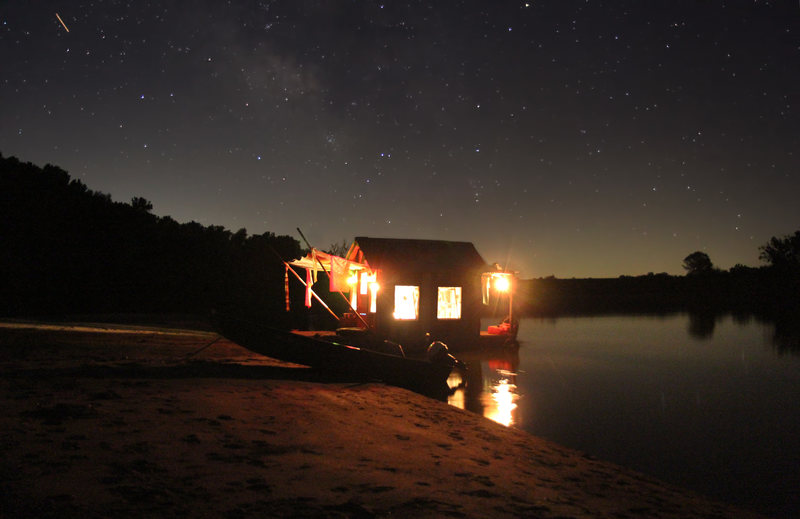 Modes’s shantyboat resting along the banks of the Sacramento River. WES MODES/CC BY-NC-SA 2.0

During the late 19th and early 20th centuries, shantyboats were a common sight along the Mississippi and Ohio Rivers. Collectively, those two rivers were home to 50,000 people living on such boats. These floating homes were often homemade and crude in nature, fashioned from recycled materials. For around $30 to $40, wealthier individuals could also purchase a houseboat that was less crude, resembling a shotgun house with up to two to three rooms. In Louisville, Kentucky, between 1870 and 1910, buying and living on a houseboat was a better option than paying $5 a day to rent a room in a crowded tenement.

Modes wanted his shantyboat to replicate those historical models, so in 2012, he began erecting a vessel with salvageable materials. While the hull of the ship was made from new wood, the framing and siding for the cabin were fashioned out of reclaimed lumber from the local dump or from scavenging through sheds and tearing down chicken coops. Modes documented the entire process of the build on his Shantyboat build blog.

After two years of labor, in 2014, Modes was ready for his biggest river voyage to date, a summer on the Mississippi River, except this time, he also wanted to document the oral and living history of river communities and to shed light on a forgotten thread of American history. “I found that there’s very little written about the social ecology of river communities,” he says of his motivation. Modes didn’t just want to be a floating historian but also wanted to know if this type of culture and connection to the river still exist today. If so, he wondered, how has this lifestyle changed over the decades? 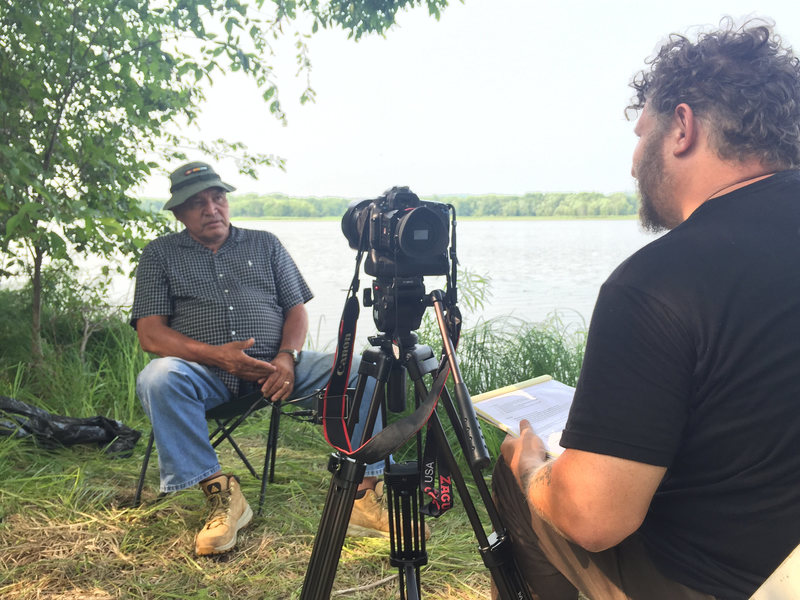 Through interviewing members of contemporary river communities, Modes says he has been able to compile a “complementary and contradictory collage of unexpected stories that people tell.” For example, he has spoken to people whose homes have been pushed off a river by shifting socioeconomic conditions. But he has also chatted with a family who owns a very expensive home near the same river, and that family was unaware they were doing the pushing.

In previous centuries, most of these communities largely consisted of women, children, itinerant workers, displaced farmers, or factory workers trying to make the best life for themselves during the Great Panic of 1893 and then the Great Depression, says Modes. That’s one of the primary reasons these communities were established along the backdrop of industrial towns. Residents also worked in various cottage industries, such as sewing or raising pigs along the river.

Shantyboats also made it possible for many immigrant families to establish foundations in the United States. “It was a place where if you needed work and you’re a new immigrant and nobody would rent to you or you didn’t have any money… well, maybe for a couple hundred bucks you could buy or rent a shantyboat and be able to live and work,” says Modes. 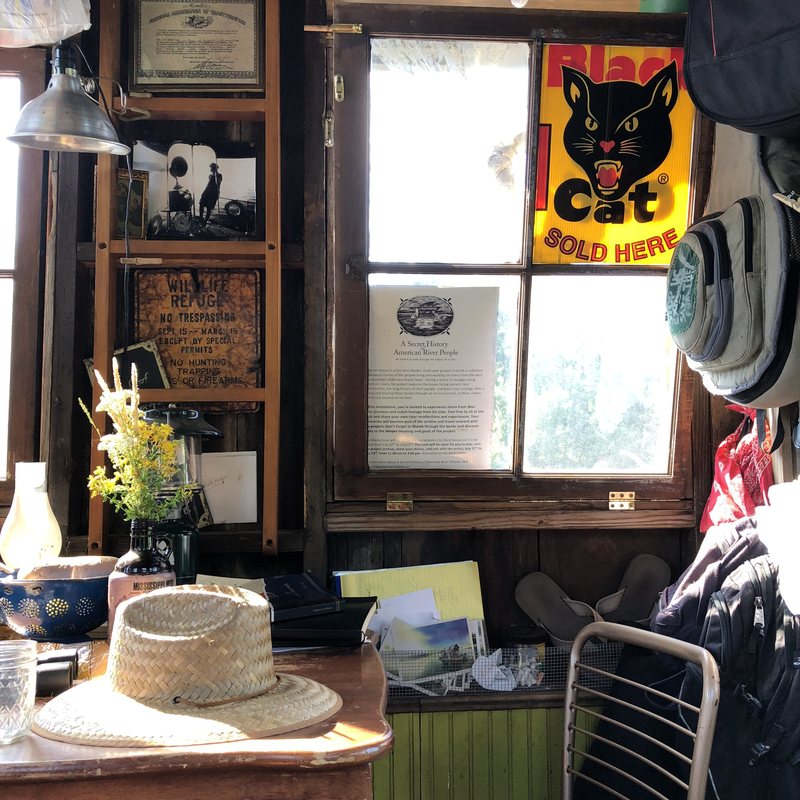 Inside the shantyboat, Modes displays some of the items he has collected from his journeys. WES MODES/CC BY-NC-SA 2.0

Unfortunately, these communities were frequently shunned by those who lived farther inland. Shantyboat residents were regularly painted in a negative light, maligned as vagrants, drunks, and thieves. In 1895, The Cincinnati Enquirer referred to shantyboaters as “River Tramps,” and classified them as a “strange floating population.” The article discusses with disdain the tax-free lifestyles of the men, while their wives and children engage in “petty thievery.”

They were also the victims of various campaigns to have them banned from waterfronts. In 1901, Jeremiah Rainy Esq. led a month-long campaign in Ohio against these communities, vowing to “drive them from the sacred soil of Scioto County,” as reported by the Portsmouth Times.

“A lot of the townies were really dead set against shantyboats and squatters,” says Modes. While these communities certainly had their rough edges, as they were frequent haunts for bootleggers and rum-runners, Modes says it’s hard to know how much truth those unfavorable depictions actually held.

“We need to understand that this was a complicated life, on the margins of nature and industrial America,” says Mark Wetherington, former director of the Filson Historical Society in Louisville, Kentucky, via email. “Because they have mostly disappeared, that does not mean their story is not worth telling.”

While traversing his very own river journeys, Modes has sought to illuminate these sometimes misunderstood communities. “I wanted to float rivers but, I wanted to do it in a way where I wasn’t a tourist sucking up the vibe,” says Modes. “I wanted to give something back to those communities and what I hoped to give back was the gift of listening, hearing their stories and saving them for the future.” 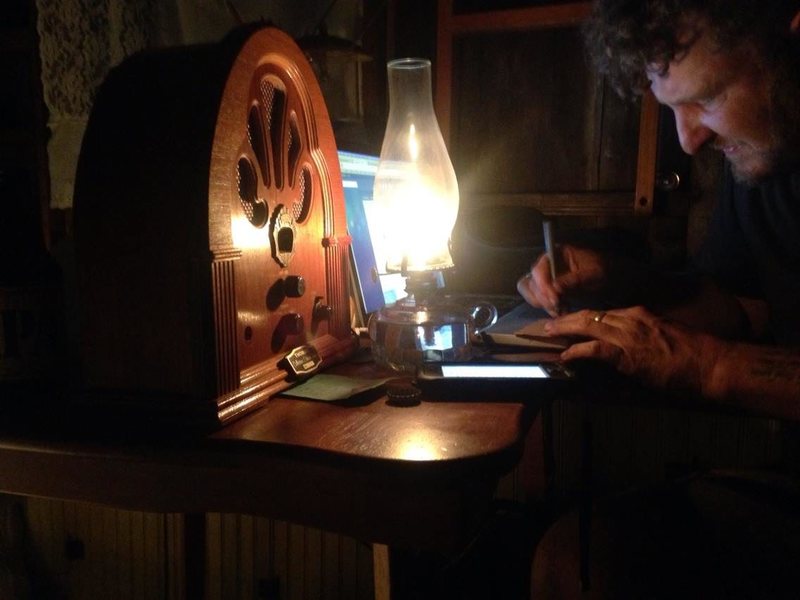 Modes working on his digital archive aboard the shantyboat. WES MODES/CC BY-NC-SA 2.0

To accomplish this goal, Modes wanted to document every leg of his journey, the people he spoke with, their stories and lives. He also wanted to record the things he saw and develop an interactive web documentary and archive, so people could follow the journey and learn about this hidden culture. The boat itself would become a touring art installation, displaying the photos, artifacts, and folk art collected and created along the trek.

In 2014, the adventure began on the river Modes felt loomed the largest in American history and literature: the Big Muddy, the mighty Mississippi River. During that summer, Modes began bobbing down the Mississippi with his shanty-mate Jeremiah Daniels, a network engineer and former soldier whose tours stationed him between the Tigris and Euphrates rivers. “I was compelled to know more about the latent substructures that had shaped our nation,” says Daniels, via email. “I think it’s really important for people to examine their connections and impact with their communities and their environments.”

For the last six years, the two have been riding the currents, along with a rotating cast of volunteers and students from UC Santa Cruz. They have completed 125 interviews with everyone from museum coordinators, artists, marina owners, commercial fishermen, and those that grew up on or near the water. They also have collected hundreds of hours of video footage from their excursions along 1,200 miles of rivers. Those clips live on the project’s website. 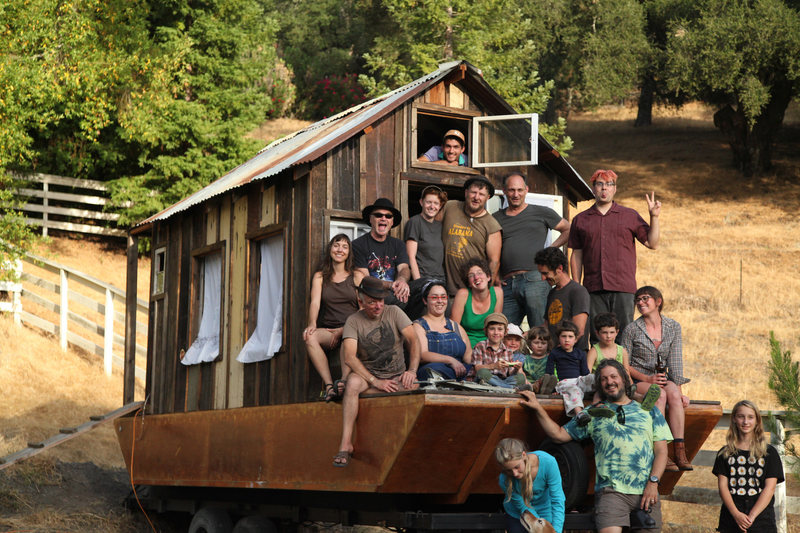 Workers and supporters of the Secret History shantyboat gather to say goodbye before an expedition. WES MODES/CC BY-NC-SA 2.0

Several years into the undertaking, Modes’s shantyboat itself has been transformed into a living art project, traveling to museum exhibits and various pop-ups. Modes says visitors to his boat initially come for the romance and intrigue of river life, but stay for the stories and history.

In the summer of 2019, the boat will take on another iconic waterway, the Ohio River. The vessel will launch from Pittsburgh, Pennsylvania, in late June and travel through Ohio, West Virginia, and Kentucky. It should be an interesting voyage, according to Modes, because of the river’s World War II history of shipbuilding. It’s also a route with a strong Native American heritage. “Part of my mission is to collect stories that don’t make the dominant historical narrative,” says Modes. Until that trip begins, the shantyboat is enjoying a stay at The Portland Museum in Louisville, Kentucky.

Modes isn’t stopping anytime soon. He has future river trips planned up until 2020. And while he still has many U.S. rivers to float down, he hopes to take the shantyboat to England’s canals one day and explore the culture of a different type of waterway.

“I just continue to be fascinated by people’s stories. It provides me artistically with adventure and inspiration,” says Modes. When asked when the project might end, Modes always answers the same way and with a chuckle: “when I run out of rivers.”

Matt Derrick
Hey, I'm Matt Derrick, the founder of Squat the Planet. If you're reading this, you obviously want to know more about me, so here we go: So if you haven't guessed from seeing this website, I'm a big computer geek / gamer, but I like to do other...
View all 28 featured items

Thank you for that, Matt. I have been watching, periodically, the videos about these journeys, on Youtube. I live near him, will see if he does any local presentations when he is not traveling.

I am a big fan of Harlan Hubbard, who along with his wife, traveled the Ohio and Miss. rivers by shantyboat,before finally settling down to an off grid life on the banks of the Ohio River. The most well known of the books he authored is called “ Shantyboat “, of course . They lived a simple, largely self sufficient life, not owning a car, or even a motorized boat, rowing into town for the few supplies they could not supply for themselves. They lived a long, satisfied life.