Toggle sidebar
Menu
Install the app
You are using an out of date browser. It may not display this or other websites correctly.
You should upgrade or use an alternative browser.
Featured

This is the story about pretty much my most stupid boat adventure.

One day, I decided to take the 26' sailboat I lived on for a sail on the San Francisco bay to work out some kinks. I was just going out for a quick jaunt, I thought, so I didn't grab extra food or water, and didn't even check my gas tank on my little four horsepower outboard. It was a great outboard, got amazing mileage, but was a little underpowered for the boat, but generally got her around pretty well. I fired her up, and went out for a quick jaunt around Angel Island. Gorgeous day, plenty of wind, a six pack, and a bit of cannabis. I was in such a hurry to get out and enjoy the day that I totally neglected to do one really important thing: I didn't check the tide charts.

This is the most basic thing to do when you're sailing around land. You have to know which way the tide is going. Especially in the bay. See, the Golden Gate Bridge is a narrow point that all the water passes through. That turns into a funnel for the entire bay when the tide goes out; the currents are crazy strong. If you're anywhere near where that bridge is when the tide turns, you need a strong wind or a strong motor to go the other direction. I think you see where this is going. 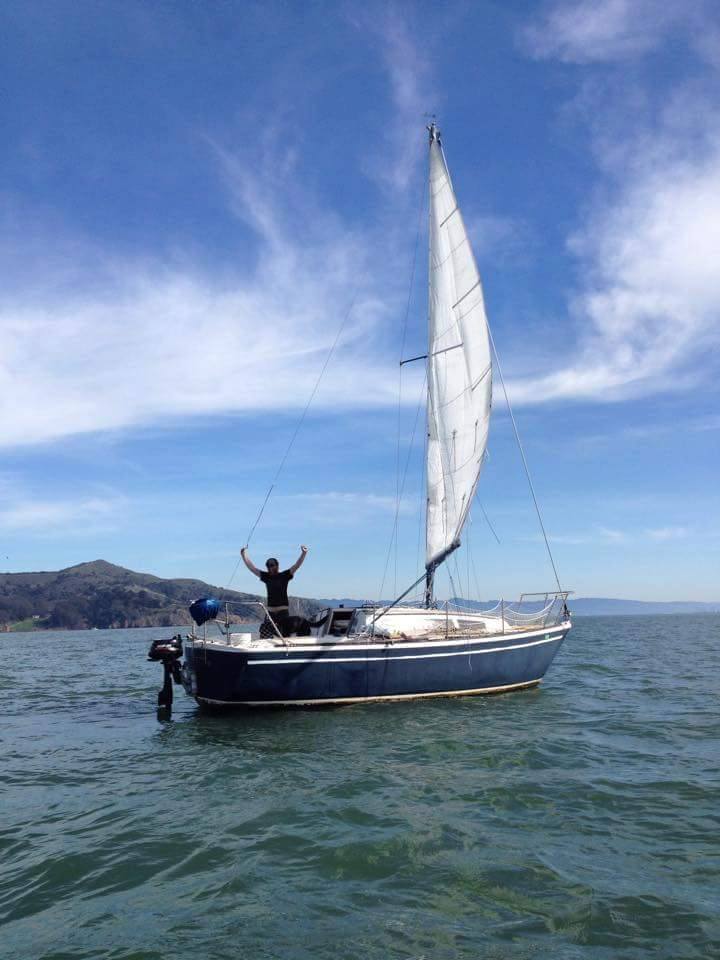 I had some friends sailing along who got a good picture of me, about half an hour before doom struck.

Like they were teaming up against me, the wind died and the tide turned. My friends had work, and had gone home, but I had four more beers in my six pack, and it was still early. I fired up the motor, but it was too late, and I was too close to the bridge. Kicking and screaming, outboard at full throttle, I was still getting dragged backward toward the open ocean, without any real supplies. The gas lasted thirty minutes before the outboard finally ran out of gas. At that point, I knew I was going out the gate and out to sea. I decided I was okay with that. Once I was out the gate, the tide wouldn't be nearly as much of a problem, and in about 5 hours the tide would turn again, bringing me on in, at which point there'd hopefully be some wind. I work the tiller like crazy to keep me away from the rocks on the way out, and then I'm home free.

The sunset was gorgeous as I went out the gate and to the ocean, dolphins trailing in my wake. The waves were big, but gentle; I wasn't really worried. SF bay is some of the toughest sailing in the world; lots of rocks, extremely strong currents, powerful winds that could switch direction without any warning, lots of stuff to accidentally hit, choppy waves that can easily kill forward momentum. The ocean is cake in comparison, especially a nice calm ocean. I steered proudly past everybody that was coming in because the sun had set. I was going to be out on the ocean after sunset. I hung out outside the gate a while, caught some breeze, and a few hours later the tide turned. I was feeling pretty good as I coasted back under the gate under a decent breeze. I was in sight of the anchorage I called home when the tide turned again, and the breeze died. It was after midnight. Goddammit.

I didn't have a chance. I didn't even have the outboard to slow me down this time. The current dragged me over to the other side of the bridge, and I found myself getting way too close to one of the pillars of the Golden Gate Bridge, actually right at it, with very little control. I ran to the bow of my boat, and threw the anchor I had ready to go, feeding line out after it, hoping my 200 feet would be enough to catch and hold, watching behind me as that pillar got closer and closer. Finally, I felt the anchor bite, and cleated it off, thank god for one stroke of luck. Now I'm sitting with my boat aimed directly at this giant concrete pillar, 50 feet away, water rushing past me at high speed.

I've slept under a lot of bridges, and I've slept on my boat a lot, but I've never slept on my boat under a bridge, and I've never slept under Golden Gate Bridge, so this is a new experience. It's about 3 am now, though, and the day (and that six pack) is definitely catching up to me. The dog is fairly concerned about this development, but rolling with it. Eyeing that pillar nervously, I grab my sleeping bag and lay out in the cockpit to grab whatever sleep I can. Of course, the fact that my anchor could go at any minute is at the front of my mind, so for the next four hours I wake up every five minutes to make sure that pillar isn't getting any closer. It's pretty much the worst sleep of my life.

Finally, the sun comes up, and the tide turns again. A decent morning wind kicks up, so I pull up my anchor, and I'm off again, cruising along the shore of San Francisco while the tourists stare, cutting across the bay, and finally, FINALLY I've reached the anchorage I'm calling home. Life is good. I grab onto the anchor I left to mark my spot, hop into my dinghy, and head for the yacht club to get some lunch and tell everybody about my stupid, stupid adventure.

I closed my account
This is an awesome read. Well written, full of useful info, and a happy ending. I was recently caught in an ebb and it's terrifying when the boat starts moving backward sounds like you handled it like a boss. Good show mate 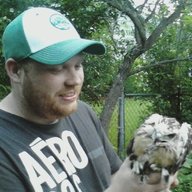 Yea never fun when the tides don't go your way. Water is powerful! My solo sailing was mostly in and around the Hudson River and Long Island. I had my engine die on me with no wind going though Hell Gate on the East River. Horrible stretch to sail anyway, this compounded the issue.

Glad you made it though that OK!
R

Great story - glad you made it back to tell!
You must log in or register to reply here.