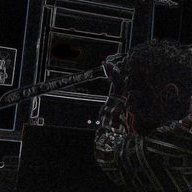 She was the moon and he was no one. Her color was blue and his black. They met on a few occasions, usually at a party or some other social gathering, but they knew nothing of each other. He didn’t know she was frail. She didn’t know he was small. They never talked, except for the cordial greetings of their caste. But they shared something, some fundamental part of the beyond, some piece of the eternal mystery.

It started that orange autumn night. We were all there, in some way, especially the cup. He was in a stupor and she was bliss. It was the only time they shared an understanding, though neither of them knew it. The moment was perpetually brief. Fate had overlooked them. The air was cold but they were warm.

No one knew she was the moon. She did not. She only knew herself as the reflection in her mirror. She was not vain, she was physical. So she saw him physically while he observed himself in abstractions. He saw her in metaphors. They had no link except for that drunken moment. But it was there. No one knew it.

Eventually he grew sick and drew close to death; not physically. She was happy in her ignorance and by their understanding so was he. No one died.

Adventures in Social Engineering From My Youth....