I love hearing about people that just one day decided they were going to ride, and then kept on riding.


Jack Day of West Des Moines is headed for his fifth trio across the U.S. In August on his bicycle. He is 72.

Iowa cyclists who are worried about getting in miles to prepare for the 420-mile RAGBRAI this month should take note of Jack Day for inspiration.

The West Des Moines man pedals across the country every summer on his heavy, steel-framed bicycle loaded with 100 pounds of gear — 18,200 miles in four summers — and will start this summer's 4,000-mile journey from near the Canadian border in August.

What makes him even more interesting is his description of what he is not, detailed during a recent conversation at Gray’s Lake.

He is not racing. He starts out averaging 10 mph and finishes at about 14, considering his legs are like solid tree trunks by then. Young guys he encounters across country are always looking over the next hill, trying to get there. He’s trying to enjoy the moment and talk to people.

He is not into gear. When he got the idea for his first ride in 2011, a 4,100-mile trip from San Francisco to New York City, he bought a $220 Schwinn from Walmart and took off without waterproof bags or much training. He still just pedals without toe clips or clip-on bike shoes as if he were taking a trip to the grocery store.

He is not raising money. Many cross-country adventurers, whether running, walking, skating, one-legged hopping, etc., seem to be promoting a cause. He has no sponsors and the only thing he is promoting is good health in your senior years but, mainly, to be unafraid to have fun.

The idea formed when he retired from the corporate offices of Kum & Go in 2010. He was leisurely pedaling on the Raccoon River Valley Trail. By no means was he a serious cyclist, though he’d done a couple days on RAGBRAI. He saw a man on the trail pushing a heavy cart of belongings and stopped to talk. “I thought he was crazy,” he said.

Turns out, the man was walking across country to Salt Lake City, home of his ancestors.

“I thought that I needed some of that adventure in my life,” said Day.

So the bachelor retiree, who describes himself as unathletic, told his three adult children that he was inspired to pedal across the country. They just nodded and kept on talking about other things. That’s nice. "Senile," he said. They didn’t know he was serious until he nearly had his bike shorts on.

“We were concerned for his safety,” said son Parker Day, 34, himself a West Des Moines triathlete. “It’s not the safest thing to be doing. But by the end of the first couple weeks, we started to think he had figured this out.”

As he pedaled day after day across the middle of the country, from San Fran and more than 4,000 miles to New York, he became astounded at what he found in America. People were actually friendly. Motor vehicles didn’t run him off the road, aside from the occasional yahoo in a pickup thinking it was funny, and when he had a bike breakdown he never waited more than a few minutes before someone stopped to help.

People offered their homes, their food, their conversation.

“I’ve stayed in every place you can imagine – in a teepee, on a boat in Florida, on an Indian reservation,” he said.

One day at a reservation in South Dakota, he said he was among the poorest people he had seen. They had nothing, but they helped him. When they found out he had children and the next day was Father’s Day, they told him he was staying for a celebration with the family.

People often gave him “lucky pieces” – charms, silver dollars and a colorful hanky from a woman in Colorado that he still has tied to his bike. He’s found himself camping in the middle of Occupy protesters in the city and pitching a tent on rodeo grounds in the country. He’s camped in deserts and mountain tops and plains.

By his next trip, a grueling 7,100-mile journey in 2013 down the Mississippi River, around the entire coasts of Florida and up the Eastern Seaboard to Maine and back, he had lined up dozens of homes to stay in through warmshowers.org. He’d also ditched his old bike for a still heavy but newer Novara Safari, got some waterproof bags and otherwise scaled down his bulk.

All he had in life for months was loaded on his bicycle, and that was a good feeling.

He finds he is not alone out there. Many people have taken up the idea of crossing the country since Thomas Stevens’ around-the-world bicycle ride in 1880, says Gene Bisbee of Seattle, who runs a website devoted to long-distance touring, bikingbis.com. 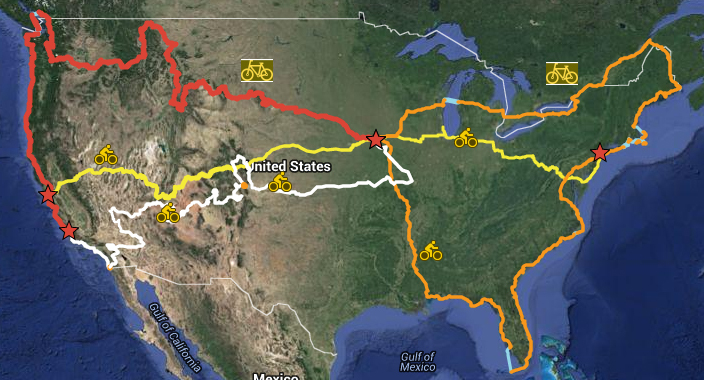 But after a cross-country bicentennial ride in 1976, it started to grow in modern times. Now the Adventure Bicycling Association has detailed information on how to do it for thousands who try. Bisbee said the advances in bicycling gear have made it easier for seniors to do it, and many involved now are “gray hairs” with time on their hands.

Day doesn’t care about the trend, really. He’s just out to meet folks. People really want to show off their town to him or cook him a meal. “I’m a social person,” he said. “I get to talking …”

His only serious mishap came on the end of his 7,100-mile journey, only a 100 miles from home near Amana, when he fell in the rain and broke his collarbone.

By the time he took his third and fourth rides in 2014 and 2015, a 3,600-mile loop through the northwest and another 3,600 through California and the mountains, climbing 14,000 peaks like a madman, he had friends all across the country.

What he didn’t have was fear. People ask if he carries a gun. He tells them they watch too much TV. Drivers running people over is a rarity, he said. That’s why it makes the news.

For potential animal attacks, he keeps a can of bear spray but hasn’t used it, although a moose was scrapping his tent with his antlers one night and on another occasion a group of loose horses thundered past his tent, while he maddeningly tried to pull at the stuck tent zipper.

“The only time I get scared is the damn lightning,” he said. “There is nowhere to go.”

Day said others have told him they were inspired by him to do the things they had always wanted but were too afraid to try.

He sees the “goal-oriented young people hauling ass" past him on bicycles and he muses that he’s enjoying the countryside.

“When you get older you see how silly all that is, those self-imposed deadlines,” he said.

But he does wonder what drives the subculture of adventurers out there, all seeking something, from old doctors and single young women to unscrubbed wanderers and brilliant philosophers. “Amazing, these people,” he said. “I meet more interesting people in one day than I do in a month here.”

His son Parker says those interactions fuel his father to keep doing it, year after year. He tells his children the wonder of pedaling right through Manhattan, or through Martha’s Vineyard, or standing on Pike’s Peak in Colorado, places he hadn’t been and certainly not on a bicycle.

So this year he will head down from above the origins of the Mississippi River in Minnesota, travel south along the river valley, take a right at New Orleans, go through Texas and New Mexico and Arizona and hope to get to his daughters in San Luis Obispo, Calif., by Thanksgiving.

“That sense of adventure, something new and unexpected, is over every hill,” Jack Day said. 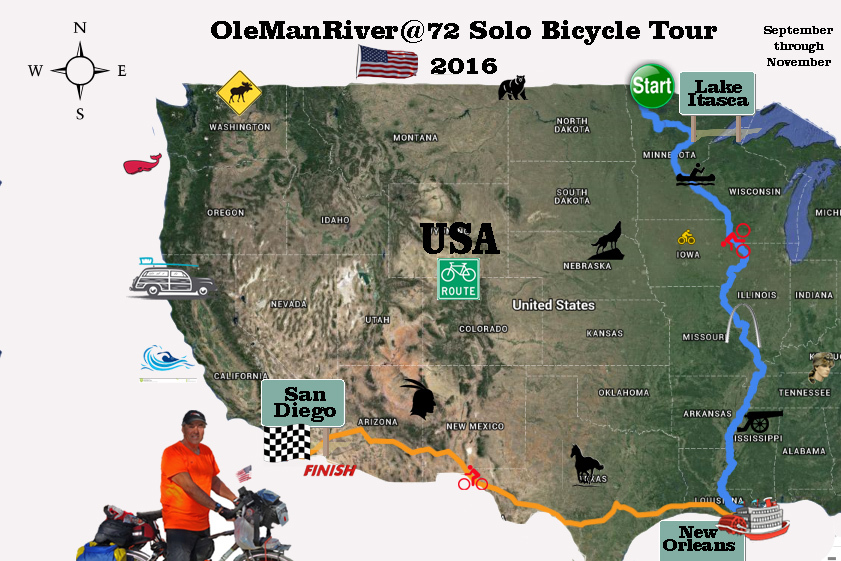 I think I've heard of this guy in my visits to some bicycle forums - but excellent article! Thanks for the share. And love his share of what he carries and suggestions too! 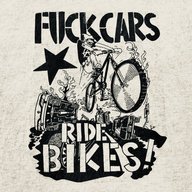 Gotta love that auto correct on the phone.

He's got some nice info on his website. One piece I remember, he talks about how a driver tried running him off the road but luckily a cop saw it and pulled the guy over right away. He said too bad heat seeking missiles are illegal. Lmao
OP