Northern California, I-5 closed in both directions, due to Delta fire. Evacuations are ordered/warned in nearby areas. (don't squat near evak zones)6

15,000+ acres burning, zero containment reported. The fire has more than tripped in size, within the last 24 hours.

Officials unsure when highway will reopen.

Dear Mods,
I know I did it wrong again... Im trying tho... Learning (i hope) - sorry for the headaches.
OP

Some track is/has been damaged by the Delta fire... Except minimum of 24 hour delays - officials are not speculating when railway OR interstate will be opened again.

Amtrak also, "halted its Coast Starlight service between Sacramento, California, and Klamath Falls, Oregon. The company said in an email that it would resume when "conditions safely permit."

And, ofcourse I-5 is also still closed at this time.

1-5 still CLOSED Friday morning... Officials are concerned about damage in the pavement of the roadway. Also concerned, burned trees that line the highway could fall creating more accidents. The burned out abandoned vehicles that littered that stretch of I-5 have been cleared away as of Friday morning.

The Delta fire had spread Thursday to over 22,000 acres, still listed with ZERO containment. Speed, size, and location of Delta fire has been forcing mandatory evacuations in many areas.
Complicating things further - The alternate route around the fire(s) is a nearly 200 mile detour - Often a only a 2 lane highway, winding with sharp curves and steep hills. Traffic congestion going 5 mph has frustrated drivers with taking more than 8 hours to navigate the recommended detour.

AVOID trying to Enter Cali from the NORTH... For awhile anyway. Definitely along anything near I-5.

Photos are totally NOT mine, & easily found by anyone on Google ... may/not copyright. 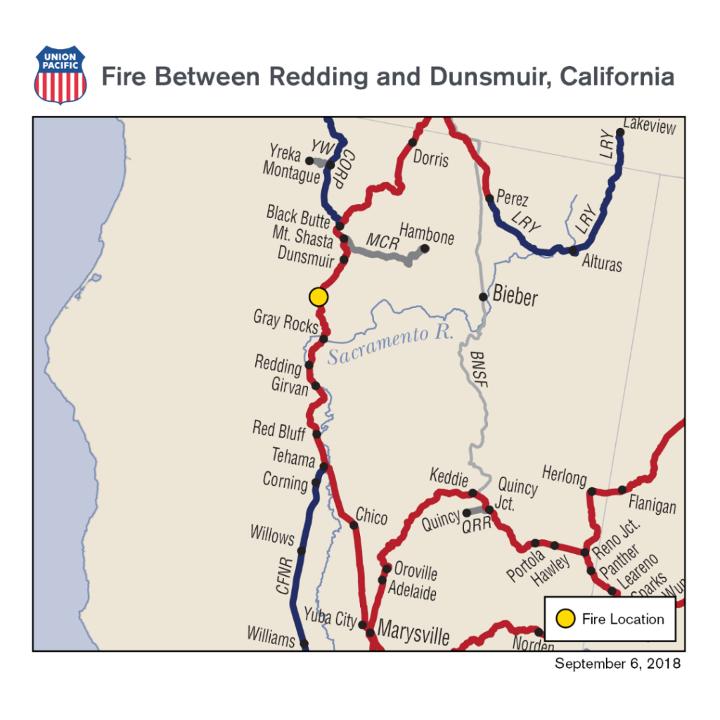 map below - badly shows location of the Delta fire, On I-5, and the other fires immediately nearby. Also shows:: rt. 299, to hwy 89 - aka, the recommended detour - 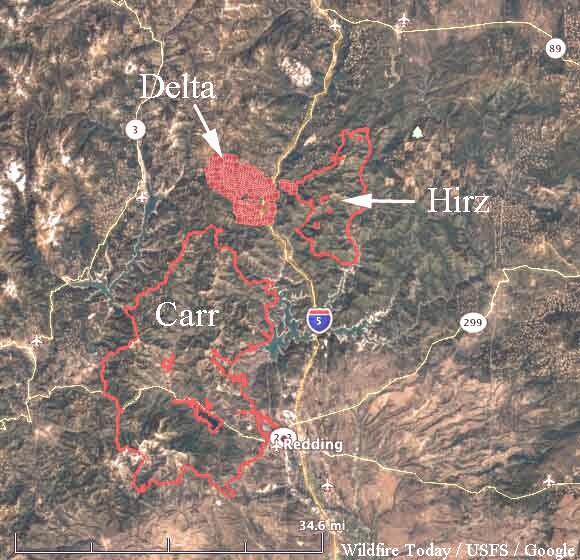 United Pacific Railroad - tentatively cleared running Freight only again through the fire area. They have water trucks and other equipment staged along their rail lines, incase the fire shifts onto their tracks again.

(I would recommend against hoping these cars, winds are expected to kick up again & BbQ hobo is likely less than yummy.... )

News link for the story:
https://ktvl.com/news/local/train-schedules-disrupted-by-delta-fire

:::: Unrelated - Most schools throughout Shasta county closed by 10am Friday, due to poor/hazardous air quality, from the smoke levels ::::

I-5 will Remain CLOSED

Interstate 5 to remain CLOSED Through Weekend : Delta wildfire is still an uncontained fire, California Department of Transportation official said. (Delta fire, still listed as ZERO % containment) Currently covering 37,000+ acres, in the Shasta area. Forcing local officials to issue mandatory evacuation notices to many in Shasta & Neighboring counties.
Sunday 9/10/3018 :: closure of I-5 will be reevaluated. Until then I-5 will remain Closed, said agency spokeswoman Denise Yergenson.

Coverage Area :: The closure affecting 45 miles of I-5, is between Fawndale Road (just south of Lake Shasta) and Mott Road, just north of Dunsmuir. 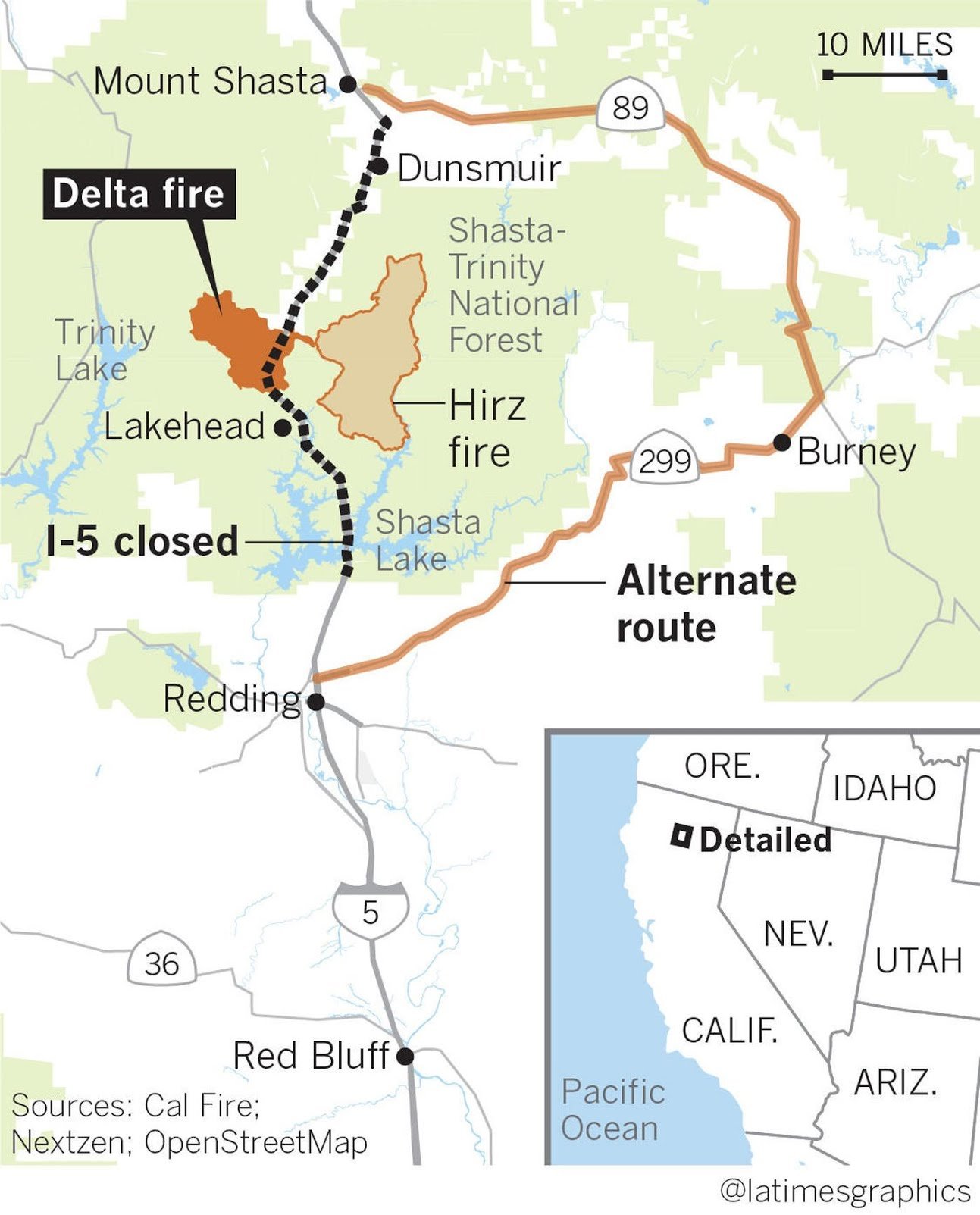 Amtrak's Coast Starlight service - still Delayed/Closed for parts of the trip -
Amtrak’s Coast Starlight utilizes Union Pacific's tracks (which current authorization is freight only...) The tracks run parallel to I-5, actively still burning. Service disruptions will be continuing on them, at least through Saturday.
Amtrak's usual route carries passengers from Los Angeles north to Seattle. - the abbreviated route made available is - Los Angeles to Sacramento, via Amtrak train. (however) Then busses are used/available, carrying passengers between Sacramento and Klamath Falls. - Seattle is not currently available -

Officials in California have re-Opened i-5. - One Lane Each Direction -

There is still a restrictions:: "no vehicles carrying potential flammable materials will be allowed along a 17-mile stretch between Antlers Bridge in Lakehead and Flume Creek Road south of Dunsmuir, California. She said that includes vehicles carrying hay, wood chips, lumber and logs."

Caution should still be used.

Be careful out there, everyone.

Twitter quote from Caltrans Dist. 2
"UPDATE: I-5 between Redding and Mt. Shasta is OPEN. Travel is reduced to one lane in each direction for approximately 17 miles. Motorists are asked to drive with caution, obey all traffic control operations and be patient. Lengthy delay. FLAMMABLE VEHICLES ARE NOT ALLOWED."
Last edited: Sep 10, 2018
OP

I-5 in Shasta county California, continues to have delays. One lane is open each, northbound and southbound, along 17mles previously-closed by the Delta Wildfire.
The fire continues to burn on both sides of the highway. So far, 53,000 + acres have burned, and crews have only a 5% containment. Crews are estimating full containment not before Sept. 22.
No timeframe has yet been given by officials, when the remaining lanes of I-5 may reopen.
Some mandatory evacuations are still in effect in Shasta and Trinity county.
OP

(really boring video, BUT - Hey, it's a train doing something cool)

​
Fire train takes on Delta Fire in California’s Shasta County
Sep 09, 2018
Firefighters aboard a special fire-fighting train joined the effort to contain the Delta Fire in Shasta County, California on September 7, spraying water on forests along the tracks near the Sacramento River. The Delta Fire was zero percent contained
By Dan Ryant via Storyful

I-5 OPEN - all lanes, both directions. Most Truck restrictions are also lifted. - some exits still closed, however.

Evacuation Orders, for Shasta county, some of these have been lifted, others remain.

I-5 all lanes open, after flare up Thursday.

Thursday saw i-5 shut down, again, for 6 hours. A flare up of the fire along the freeway caused the shut down of all lanes and multiple exits. Crews battling the fire however succeeded in suppressing the flare, allowing i-5 to reopen all lanes and both directions. No restrictions reported at this time.

Continued flare ups are possible, continued caution is advised for this section of i-5. Delays and or closure remain optional as fire conditions fluctuate.

Yesterday, firefighters achieved 41 percent containment through unified efforts of local, state, and federal resources. Today, firefighters will focus on securing line on the east side of Interstate 5 in the Hazel Creek area. Travelers on the highway are likely to see smoke and/or firefighting operations between Gibson Road and Sims Road exits. Aircraft will also be visible in this area as they continue to assist with water drops and fireline monitoring.
OP

Due to advances in containment: ALL Evacuations Orders have been LIFTED, for all nearby counties.

I-5 open, all lanes, both directions... Any/All restrictions have been lifted.