The North Trip
This is a story from last year, 2020 Hitchhiking and street living for 5 Months. Not my first trip tho...

It was early in the year and the beginning of a pandemic. I just came back from Canada. My neighbour and had big plans. The idea was to hitchhike to the north of Scandinavia. We decided to be back in November. So we had plenty of time. 5 Months. There was one problem. The borders were closed...

So we waited, waited and waited. Two Months. And then finally, the borders opened up again and we left Switzerland. Before we really got far up north, we visited my friend Mo in Stuttgart. He was the first of many hosts on this trip. We rushed trough Germany, Berlin, Rostock and took the ferry to Sweden.

We arrived in Trelleborg and hitchhiked all the way through the south of Sweden. Long waiting times, but the people which stopped, were amazing. We got invited to a nice Summerhouse just besides the beach!

We hitchhiked to Stockholm and then we hitchhiked up to Jokkmokk. Our plan was to spend one month in the Sarek Nationalpark. But the mosquitos denied the access.

So our only option was to escape the mosquitos. Our route was leading through Lulea to the coast and then inland again to Gallivera, Kiruna and Abisko. We entered Norway...

The midnight-season was coming to an end as we entered the beautiful island chains of Lofoten. There is a village at the end of that island chain. It's called Å. Our goal. Good fishing and good people. We quickly got invited to a cool guy and drank beer and Hennessy together. 3 Weeks we hang out together, talked about the life, god, religion and many many more very interesting topics. It was an amazing time!

After those very intense weeks we hitchiked to Tromsö where we promptly got invited again. To a swiss woman. She is an artic tundra scientist. We met many local people and felt blessed for our expirience.

There was one thing missing on our trip so far. The northern lights. Our plan was to explore Finnmark for a month and then return to the Lofoten to meet up with our friend again. And so we did. As we had enough time we usally stayed around 2-3 days at the same spot. This way we could really get an insight view of the environment.

We visited the following places after Tromsö: Hellingskogen, Alta, Olderfjord and Nordkapp, Lakselv, Karasjok, Kirkenes, Vardö, Tana Bru, Storslett. The north of Norway is huge and we could cover a lot of distance. Finnmark also delivered the crazy lights at night. The first saw them in Björnvatn near Kirkenes. At the 28th August. Preatty early, the locals told us. The following day we saw them again in Vardö. A local guy even came to hang out with us to watch the lights. Amazing time in Finnmark!

As we hitchhiked from Alta back to Tromsö, we wanted to go back to Lofoten, we got picked up by Marie, a mother living in Stroslett. She invited us to her place and we got to know here cute little family! It was such an amazing time as we really got to know eachother. She showed us the beautiful backyard, amazing nature and views. We had an amazing time!

After Storslett we hitchiked to our friend in Lofoten. We spent another 3 weeks together. It was such an amazing expirience in the Lofoten, nearly every night we saw the northern lights,. We became good friends. Very good ones. Thanks universe!

One evening we went out fishing, didn’t catch any, but returnd with 200+ Magic Mushrooms, they were growing everywhere. We picked most of them, dried them overnight and the next day we had a party on the hillside. The shrooms work good with the northern lights. Our friend scored some hash as well, so the whole thing was even about to get better. What a time to be alive!

It was time to say goodbye as the days were getting shorter. It was the 5th of October. And we left on the 22th of June. Long time not seeing “home”. So we headed home. We reached Oslo on the 4th day. Norway provided on the way very very well. People invited us again, gave us food and we had good conversations with the locals.

After Oslo we hitchhiked to Trelleborg and went over to the Mainland Europe again. We reached Germany but could only think about Scandinavia. Finnmark, Lofoten, Norway. Up North. It aint the same down here, we realised in Berlin. Too many people, too many buildings, it just aint the same, NORTH MAN that’s where the futures lies! But the people down here are also very good and kind. Twice we got invited through the way of Germany. And it didnt took sooo long and we were back home. Back where it all started. We hitchhiked a ride from Zürich straight to our hometown. 5 Minutes we waited for this ride. As we thank him and leave the car I ask for his name. "Matthias" he sayed.

thriveTraveller said:
3 Weeks we hang out together, talked about the life, god, religion and many many more very interesting topics.
Click to expand...

Is the religious life for people there different from America or Canada at all? Like are there still remnants from Norse culture and stuff like that up there at all?
Also shrooms under the northern lights sounds like a really awesome experience, can't believe I never thought of trying that. The people there sound lovely though, thanks for sharing, I hope to have a trip like that at least once in my life.
••• 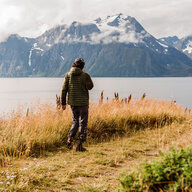 many Sami people gave us rides, or free coffee. when it comes to the Viking religion, there is pretty much nothing left of it. as far as I have seen.

The sami people tho, they have herds of rentier(caribou) they follow them in the alpine of the mountains whole year, and in autmn they gather them together an slauther some for their living.
•••

@thriveTraveller love the story, the pics look awesome too! i guess my only suggestion would be to maybe instersperse them through the story and maybe give us some captions about the pics so we know what that place is?
•••

Sounds like a wonderful time. Heading up there is certainly on my list as well, thanks for sharing your experience and those gorgeous photos!
•••
You must log in or register to reply here.

Nomadic Culture Tuesday at 11:24 PM
japanarchist
I hopped freights, hitched, bicycled and squated North America for 6 years, now I am off the road and living in ATX.

The In-Between Sep 15, 2021
thewildkindness
Did i just win, or did i just disguise my psychosis