Suppose this will do (1 Viewer) 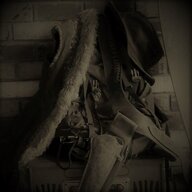 Well guess this was inevitable, the introduction.


Damn, this is hard. haha. I've hopped freight, hitched and hiked just about every inch of America, on and off for almost 10 years.
During my travels, I met and was eventually "adopted" by the same family that adopted Supertramp during his travels. The kid from "Into the Wild" when he was living on a farm.
I've also lived out in Slab City. Real American Gypsy. Wouldn't think of it when looking at me as I look like a regular 30ish American kid but beneath I'm a seasoned piece of jerky whose lived on the road. I could spend eternity talking about my experiences but I don't wish to do that, keeping this condensed and short.

bout to hit the road again too so who knows, maybe we'll rage out there.
•••

Welcome to the StP Community NomadicGoat86!!!!

Hope to read some of your adventures!!!

nice intro, what are you summer plans? any interest in coming out to our dirty scouts jamboree?
•••
You must log in or register to reply here.