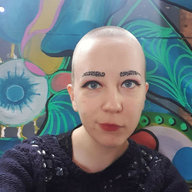 hello hello lovely people, I've been lurking for a week or two so I wanna introduce myself (typed this up and it turned into my life story whoops)

i'm from germany originally and i left my teeny tiny village when i was 18, traveled around the country for two months then settled in dresden for a year and a half. got my heart broken there so i moved on, and i spent the next four years in hamburg, which as a city is very close to my heart, favourite city hands down.

then in january last year I had this dream where i was traveling with a wonderful person, and i felt the love between us after waking up (cheesy, I know), which pretty much gave me the strength to move on and Do Something About Things. i still don't know why but i decided i wanted to walk el camino all the way from hamburg to santiago de compostela, without actually training for it, "just take it slow" - that worked out as well as you'd think, i overdid the hiking on the second day and fucked up my hip and got really dejected and panicky. so like any sane person I decided to go to Italy, took the night train and woke up when we were just rolling through the alps, which is one of the most beautiful ways to wake up. I spent two weeks in Italy, went to Pompeii and Rome too, cried a lot, spent all my money on hostels, got bed bugs, the whole works. proper breakdown. I used the bed bugs as an excuse to go back to my parents for a month, and i actually managed to sort my head out a fair bit. couldn't forget that dream though, I felt like I really needed to find that person and the only place that made sense was London. so I just went.

I got here and I didn't actually have a place to sleep (or money) so I got cheap coffee at a 24h mcdonald's and napped in hyde park during the day. ambled around hostels for a couple days after that, which a friend payed for, because she was horrified at me sleeping in the park (bless). still didn't know where to go afterwards though, until i got chatted up by a strange cult/alien religion guy who let me crash on his couch for a night. he gave me food and a tshirt and jeans, too (bless!). again, didn't have a place to stay afterwards, so i went to camden, ambled along the canal, and chatted up these hippies who took me to primrose hill to watch the sunset, and they connected me to one of their squatter friends whose crew lived in a salvation army church, and that was that. I'm still with that crew, and we're pretty much a real family, taking care of each other and being horribly sappy most of the time. we moved into a big office building and we recently celebrated 6 months in here. we've turned it into a proper art space (I'd love to post pictures if people are interested!) and we host events, jam out together, paint... fair amount of drama too, of course, we're up to 30 people at times so that's normal.

and yeh, i actually did find the person i saw in my dream, even if reality is stranger and more complex but that's just how things work right

anywayz i love creating stuff, anything from sewing to writing to cooking to charcoal drawing. currently getting massively into urban exploration, london is a true treasure trove. and I'm fairly good at research and resources, so I'll be sharing a lot of that in the forums x

I’m happy ur happy... seems love filled magical and worth every shitty moment...

Hi, I’m Evelyn. At some point I want to escape this.