A great thing about travelling is when youre in a really low place (which inevitably happens on the road) there is always something small thats seems to shift your mood and make everything in the world right again; whether its a sunset, a candy bar being so fucking delicious, or some birds singing just for you.

This is about the occasions when you run across another traveller, share instant depthless tribal connection, and feel great for realizing youre not out there alone and shit aint so bad.

I was bike touring, in El Cuco El Salvador finishing up 3 or 4 days or soul rejuvenation on the beach. I was intent on making it to the Honduras border that day, which seemed feasible based in distant. I left at 5am so i could have a good portion of the cool morning to ride through.
I went into the day worried about Honduras as there were riots going/curfews/etc on and everyone white was skipping, but I didnt want to miss Isla de Tigre, so I said fuck it, send it, ya only live once.
Everything went wrong from the start.
What I thought was a good route on google maps turned out to be a dirt road marked w potholes and stones. 30 miles Up and down hills in the jungle, bouncing up and down w a sore ass, wrists and forearms from having to clench handlebars, and covering miles at a snailpace. Had to cross a wide shallow river that wasnt on the map which was a major inconvenience in my mood. Close to the border it flattened out and got hot as hell, I roasted for about 3 hrs til the border. Border crossings are always a pain and honduran immigration seemed especially mean to me which lowered my spirits more. I stopped for some food and the lady who served me was mean to me.
I had been on my bike for about 12 hrs by the time I got in Honduras and knew i probably had another 2 hrs of excruciatingly hot and painful riding before i could find a suitable camp spot. I felt like absolute shit.

But heres where it gets good.
Like a mirage i see another unshaven sun raped white dood on a shit bike, bags latched haphazardly, peddling like a corpse toward the border. Usually in that situation bike tourers will loop around and shoot the shit for 20 minutes.
But we just stared at each other, trying to figure out if we were real, and gave each other a limp wave, w broad smiles. It was perfect.
I knew all his pain and anguish from thay day, and he knew mine. That was the connection. And it was priceless.

Post log-that ended w more good.
I found a camp spot right as the sun was setting in a cow pasture. I had just set up my hammock and was lounging when the farmer who worked the land was coming back in w his cows. I explained to him what i was doing in broken spanish, apologized, and told him Id be gone in the morning. He said no problem.
Then!
About an hour later he came back w a jug of water and 6 tamales his wife had made. My heart about burst. He stayed about 20 minutes and chatted w me about family and life.
And then I slept hard
Last edited: Mar 28, 2020

I was in Popayan Columbia with plans to cross into Ecuador.
I took the the night bus from Popayan to Ipiales, the border town in Columbia, so I could cross the border early, get it over with and make my way to Mindo.
Latin American bus stations are always frenetic and a test of patience.

I never really sleep well on buses so I was a zombie when I got to Ipiales. From there I had to take a collectivo to the border proper. Collectivos are always uncomfortable overcrowded tuna cans on wheels.

From where the collective dropped off I had to walk about a half a mile to get to immigration, through refugee camps of Venezuelans that were stuck at the border. It was crazy and sad and a bit scary to walk through a ghetto by myself.

I get to immigration at around 6am and it's packed. I had overnighted to avoid a huge crowd. Didn't matter. The lines are confusing and long, noone wants to help, and I'm feeling frustrated. I figure it out, end up taking 5 hours which seem like forrrrevvvverrrr to get my exit stamp, cross the bridge, and cruise through Ecuador immigation without much issue.

Outside immigration is a zoo, barkers, money changers, taxi drivers, all yelling at me.
I'm feeling okay as I know the worst is over, but my stress levels are maxxed.
I decide to leg it for as long as it takes to get relaxed instead of cramming into another collectivo. I'll wave one down when i get tired of walking.

As I'm getting to the end of the border bazaar, starting to feel good and lengthen my stride,
I see a dirty ass white girl, shouldering a way to big pack, with a tenacity in her face that gave her the likeness of a big ferocious cat and lively eyes found in those drunk on freedom.
The street was still busy with the business of frontera locals, we made eye contact through the crowd and simultaneously sent each other the telepathic message;
"oh, Hi! What are you doing here? This shit is crazy, yo!"
We nodded to each other like pimps and kept walking.
She went somewhere north.
And I went somewhere south.
OP

Not from the same stories, but came across this pic and thought it was funny; Hitchin In Peru, got picked up by a shirtless truck driver, couldnt go faster than 30 and watched him bribe a cop at some sort of check point. (hard for me to follow conversations at full speed, something about his truck being registered. Hablas mas despacio, por favor)

As I mentioned, encounters to boost your morale when you need it most whilest travelling dont have to be with people.

Finding the perfect campsite after a few strenuous days can have that same carthartic redeeming effect and a proper sleep will literally effect hormone balance and foster homeostasis.

I had hitched from Denver up to seattle, took about a week, getting in a few peaks in OR, met some cool runners that I admired, flew to Anchorage from sea-tac, hussled up to Denali and wonder lake as I couldn't wait. Wonder Lake was amazing, no wind, no clouds, pristine view of our continents tallest peak.

I was so excited to do Mount Marathon down in Seward so I'm out on the highway again the day after. There's that end of first week or so of being out on the road that you body and mind arent used to it and you feel beat up and worn out. It had been a long two weeks mostly in wilderness sleeping on the ground without the stuff you get used to living in town. My camp set up was minimal as I wanted the lighter pack rather than a comfy sleep. The nights were still cold in AK and the mosquitos were a legit street gang. Lil Buzzy was thier leader.

I was feeling pretty great and thankful for the good luck I had had on the trip,
But wasn't looking foward to another night of 4 hours of sleep in a tent.
Then this happened!

My first and only time glamping! I was stoked! I was so cozy and warm that night.
And I got to watch some bald eagles hunting over the lake the next morning with coffee on the porch.
I went back to that spot 2 or 3 times more over the summer going north and south on the Daulton.
Sometimes dope shit happens if you walk a little further.
D

Being in an unknown environment, exhausted, likely confused and possibly delirious are when i've had some of my biggest breakthroughs
OP 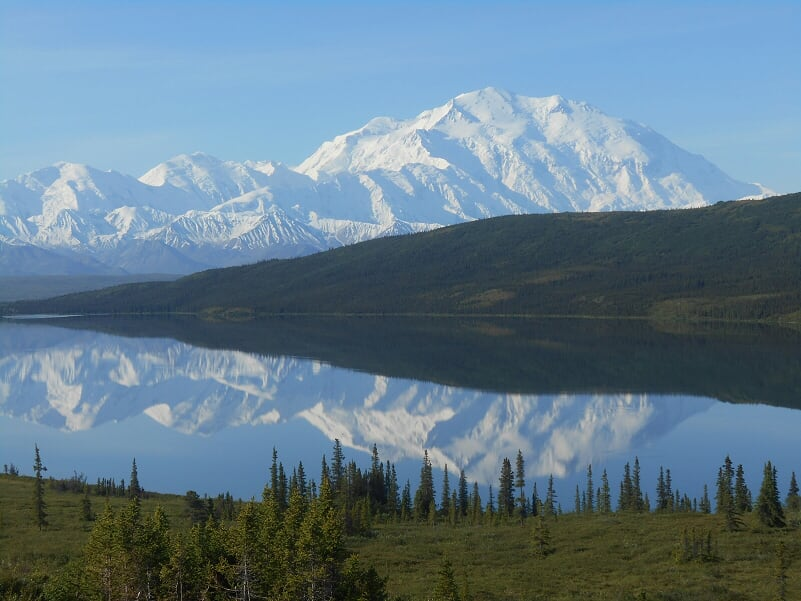 Found that shot of Denali I was able to get while at Wonder Lake. Obviously the pic does it no justice.

The size of it is enormous; and its hard to see how big it really is in a pic. You can feel how big it is when you are that close, as if it has its own gravitational field.

Denali IS the biggest mountain in the world when you consider elevation gain;

Denali rises 20,000 feet from the 3,000 foot tundra
whereas Everest rises to 27,000 from the 17,000 foot Tibetan plateau.
Same as everything in the Andes.
Denali has the biggest deviation.

This was a special picture bc based on the mountain being cloud shrouded constantly
and a constant wind causing the lake to ripple
it's almost impossible to see the mountain and its reflection in the lake.
I've heard about 3 times a year that pictures is there to take.
I was so stoked on it.
OP

Here's another really amazing experience I had w Denali, and one of the coolest things I have ever done, as I rarely have money to do this type of thing.

I was chillin at that coffee spot in Glitter Gulch just outside the Denali NP entrance.
I meet this dood who is up from the lower 48 for the summer working as a shuttle driver for a glacier landing tour.

He's looking for some weed, I tell him I'm not selling, but am happy to hook him up with a gram or so until he gets good. He's really appreciative and tells me that bc it's still early in the season a lot of the tours his company does are not fully booked; he could get me on one of the planes for free. Alaska is really nice like that, more nice people doing nice things.

I'm all over it, as it's something I wanted to do but knew I was priced out of bc it was $500.
This was the result.
Always share your weed, kiddos. Good things come of it.

There are shots of Denali's peak all thought it, but I think the best one comes at 1:50.
We got to buzz around the peak for ten minutes. I felt really small up there.
The weather and visibility were amazing and even the pilot mentioned how lucky we were to have such a beautiful day

--I know one of you boners is going to criticize the music choice.
To that I say;
YOU ARE MISSING THE POINT MAN!
Last edited: Apr 14, 2020
You must log in or register to reply here.
Similar threads
Good people you've encountered on the road.
Disturbing evening encounter in Amsterdam
Drunken, stubborn, first encounters
Haphazard encounter with a group of trainhoppers
Video Traveling on freight trains in China
Bnsf ride from Glendale to windslow az
Photos I finally visited Area 51, the #1 item on my travel bucket list
Yesterdays travels Los Angeles to Slab City
Hitchin' Denver to California: What Could Go Wrong? (Pt. 6) [Final]
Photos Hitchin' Denver to California: What Could Go Wrong? (Pt. 5)
Share:
Facebook Twitter Reddit Pinterest Tumblr WhatsApp Email Link