Just a quick update to let you know I've switched the 'reactions' system out for a new one. This is the system that lets you react with various emojis to people's posts:

All the previous options are there, but the big change is that the point values of some of the ratings have changed. 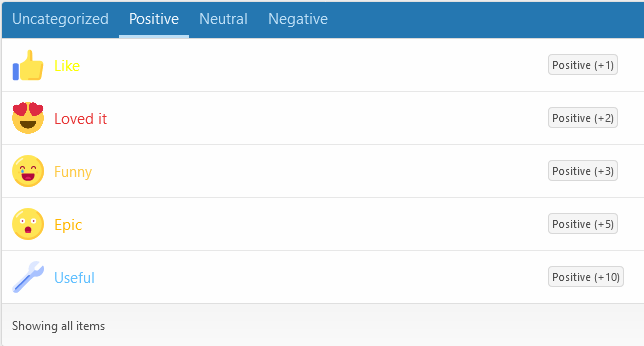 As you can see, likes are 1 point, loved it is now 2 points, funny is now 3 points, epic 5 points, and useful is a whopping 10 points. This new point system is to encourage positive and useful content on the forums. Eventually this point system will be incorporated into a kind of 'achievements' tree where folks will get special trophies on their profiles for posting things people like. The useful rating being 10 points is because I really want to reward people for posting meaningful, useful content that benefits the community.

We still have 'neutral' ratings, which are reactions that you can give posts to express your opinion on content without impacting a user's point rating (I think I'll call these 'karma points' in the future).

The agree/disagree lets people express their opinion without having to make a post (like all ratings) but also neither grants or remove points to the person getting the rating, so as to avoid an 'echo chamber', or 'yes men' mentality where people are afraid to post controversial opinions in fear of getting negative ratings.

Finally, we have the negative ratings: 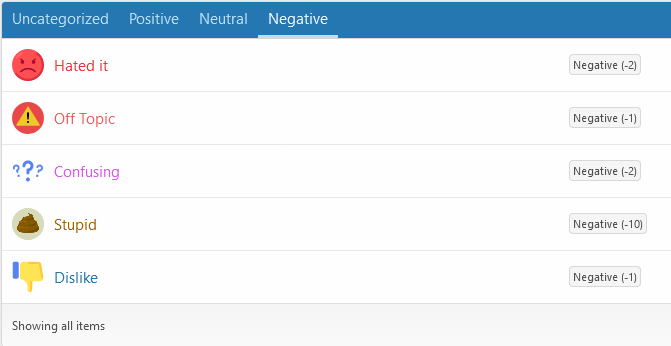 Including the infamous 'poo' rating. As you can see, the negative ratings have all been changed from 1 point to various points based on the severity of the negative rating. The stupid/poo rating is by far the largest. Each 'stupid' rating gets a negative 10 to that person's point score.

I've set up our system to auto-report posts that incur over -50 points to a single posts. So, if a post gets 5 'stupid' ratings, an alert will automatically be sent to the moderators to let us know about the situation. That kind of situation doesn't occur very often, so if someone is just being a complete asshole, hopefully a mod can do something about it right away. Of course folks are always encouraged to hit the 'report' link on a post if it's violating our website rules.

I am aware of one bug with this reactions system, and that is on the Firefox mobile browser. If you're using this browser you'll have to tap and hold the 'like' link for half a second to get the other options to show up. It's a bug that's been filed and hopefully will be fixed in a future version of the addon.

As always, thoughts, opinions, comments are always welcome. If you have ideas for new ratings, please let me know.
Reactions: IanIam and Tony G
•••

On a side note, the 'off topic' rating gets very little use, so I'm open to replacing that with something else if folks have any ideas.

Also, I'll be making a thread about it later, but I need ideas for the achievements system if anyone has any.
••• 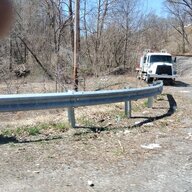 Good to know thanks matt
•••

So, a quick update, it seems that right after I posted this, the company that makes the addon for this functionality announced they are closing up shop. Great timing, right?

So I had to find an alternative. Fortunately one of the older systems we used to use is still around and I could make it mostly look like the new one. The only difference you might notice is that for desktop users, you will not get the ratings menu on mouse hover, you will have to click the like link, then select a rating. Other than that, everything else I mentioned above should remain the same.
•••
You must log in or register to reply here.
Share:
Facebook Twitter Reddit Pinterest Tumblr WhatsApp Email Share Link