I deleted myself
Mountain Man Arrested For Trying To Feed Himself, Owns Judge ... AMAZING MUST WATCH
November 21, 2013
In a packed courtroom, 52-year-old Ernie Tertelgte told the judge \u201CI am a living man protected by natural law and I have the right to forage for food when I am hungry… You are trying to create a fictitious, fraudulent action.”

Tertelgte, 52 years old, was arrested on Monday and is accused of fishing without a license and then resisting arrest.

EPIC!!! Mr. Tertelgte is absolutely 100 hundred percent correct. Fantastic statement. You havenow become a poster boy for resistance Mr. Tertelgte. Congrats to you sir and by all means keep doing what you are doing and the system be damned.
liveleak.com/view?i=521_1384992875

the conspiracy sites I'm on are all over this too - one guy has several comments on the site concerning the naysayers who commented too. 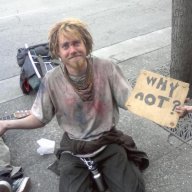 Dude's got fame and notoriety now on the net, but he'll probably never hear about it... Damn judge'll throw the book at him for telling her like it is. They don't like the truth. One time me and my buddies were locked up in Boulder and went in front of the judge after they caught us camping and drinking. He goes in front of the judge and she states her bullshit, and he's like, "Okay, all right..." but then he's like "No, hold on a damn minute. You have no right to tell me where I can sleep. The Earth is my mother and she doesn't care if I sleep on her! People have slept outside for thousands of years!" He just went off on the judge, and she got pissed and gave him two weeks instead of the two days the rest of us got. Plus the dude may not have Internet access if he's a real mountain man.
OP
N

I deleted myself
Heard about this on the radio when I was hitching through Wyoming, it was really weird though because the dumbasses on the radio were just making fun of what he was wearing the whole time and not really talking about the real issue here.... That people shouldn't be arrested, fined or tossed into the slammer for feeding themselves.

Ernie states he is not a federal citizen. How does one create a legal state where you do not belong to any government?
Bravo... Mr. Tertelgte.
OP
L

I deleted myself
Freeman on the land.
Google.
You must log in or register to reply here.