(as you wished my friend - link out in the open)

Kentish Town landmark Blustons squatted by ‘collective of homeless artists’
"We are going to great lengths to make sure nothing is damaged," say squatters 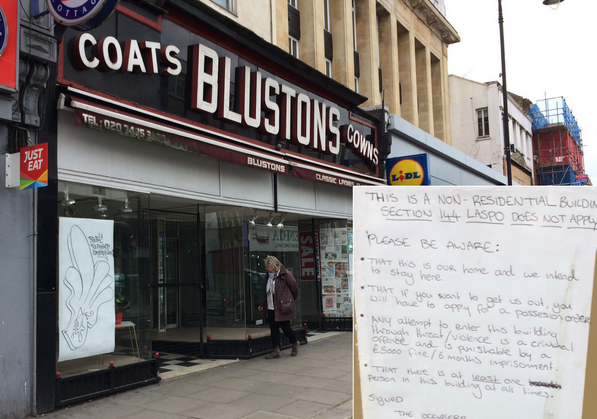 The grade-II listed shop front and, inset, a warning from “the occupiers”

A VACANT property that once housed the iconic Kentish Town fashion shop Blustons has been taken over by squatters who described themselves as a collective of artists.

The group, who say they hope to “have a positive impact on the community”, moved into the shop in Kentish Town Road this week.

The grade-II listed shop front has been occupied only intermittently since owner Michael Albert retired in 2015, bringing to an end three generations of family ownership.

One of the group, Dave Brian, said: “We are homeless artists. We are not breaking any laws or harming anyone and we intend to have a positive impact on the community though art and music.”

He said ten people were living there, after they had taken in several rough sleepers who had previously been camped in shop doorways nearby.

He said they would observe the building’s heritage status, adding: “We are going to great lengths to make sure nothing is damaged.”

The timewarp interiors – and famous window display, featuring the perennial red polka dot dress – drew admirers the world over and featured in the August 2011 edition of Vogue magazine.

It was re-opened as a clothes shop last year, but closed in March, with staff saying that people’s affection for the Blustons name had not translated into sales.

One staff member told the New Journal at the time: “When we reopened Blustons, we must have had 1,000 people come in that first week and congratulate us and say how pleased they were, but literally none of them came back and bought anything.”

While squatting in a residential building is an imprisonable offence, occupying a commercial property is not a crime. The squatters left a note on the window that reads: “Please be aware that this is our home and we intend to stay here…if you want to get us out, you will have to apply for a possession order. Any attempt to enter this building through threat/violence is a criminal offence and is punishable by a £5,000 fine/six months imprisonment.”
Last edited: Jun 7, 2017

Matt Derrick Darcyx9 Matt Derrick wrote on Darcyx9's profile.
Hey thanks for the recent uploads to the library, looks like useful stuff!
Today at 7:18 AM •••

After that I have to finish the primary work table, which will be the last big piece of the build.
Yesterday at 5:40 AM •••