In Spain, Entire Villages Are Up For Sale — And They're Going Cheap (1 Viewer)

In Spain, Entire Villages Are Up For Sale — And They're Going Cheap
AUGUST 23, 2015 7:58 AM ET
LAUREN FRAYER
Weekend Edition Sunday 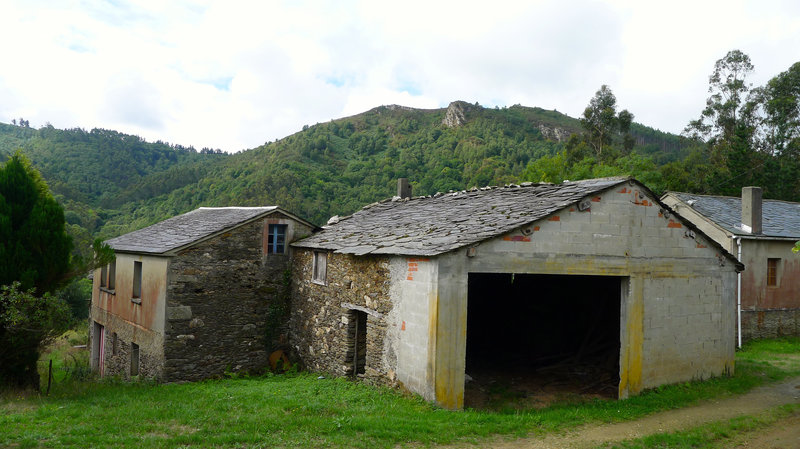 The abandoned village of O Penso, in northwest Spain, is for sale for about $230,000. The last resident died a decade ago. The village includes 100 acres with half a dozen houses, two sprawling farms with room for 70 cattle and a stand-alone bread-making kitchen.

A jolly trombone player prances through a crowd of revelers in Cantalejo, a small town about 1 1/2 hours' drive north of Madrid. But the hubbub is deceiving — because hardly anyone actually lives here. People come one week a year to party in the villages of their ancestors. But during the other 51 weeks, towns like this are deserted.

"There was a time when this place was growing! But not anymore. This pueblo is dying," says Felix Sacristan, who's 55 and unemployed, living in his late grandfather's house. "The only ones left are the elderly. There are lots of abandoned homes."


Like much of Spain's central meseta table plateau, this land is dusty and the climate is severe. People joke it's like nine months of winter and three months of fiery hell.

"This land used to be for cereals, but it's difficult to grow anything else," Sacristan says. "And who wants to be a farmer these days now, anyway?"

In northern Europe, the Industrial Revolution pulled people to big cities centuries ago. But in Spain, that migration happened much later — in the mid-20th century. The first wave occurred after the Spanish Civil War in the late 1930s; the second, after Spain's military dictatorship ended in the late 1970s. 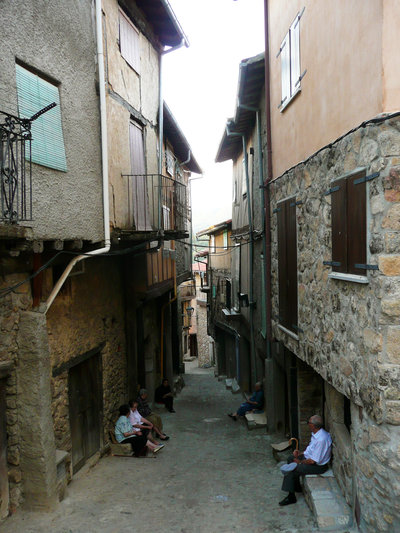 i
Elderly residents gather in a dying village in the Sierra Francia region, northwest of Madrid.

Lauren Frayer for NPR
Now there's been a third exodus, amid the recent economic crisis. But it's not just on Spain's harsh central plans. Even villages in the country's most fertile northwest region, Galicia, are being depopulated. The lush Galician landscape once supported Spain's highest population density, and half of all Spanish villages — some 3,500 hamlets — are located there.

Now nearly half of these villages are abandoned.

Enter Mark Adkinson, a British-born real estate agent who scours the countryside for abandoned properties, and tries to match them up with foreign buyers.

"Some of the places I'm finding have been empty for 50 or 60 years," Adkinson says. "And my job is to try to find the descendants."

He drives around Galicia, dropping off leaflets at boarded-up old homes, asking owners if they'd like to sell. Adkinson unfurls a map annotated with hundreds of abandoned villages as he takes NPR on a visit to one of them. 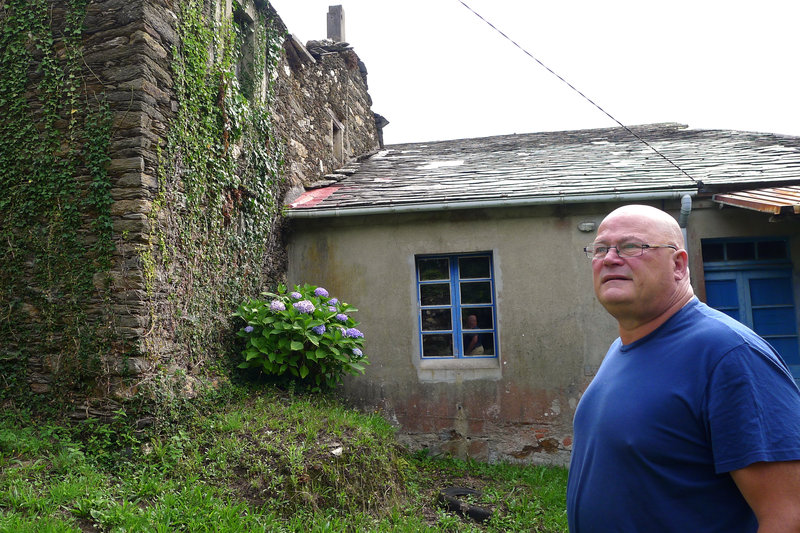 Mark Adkinson, a Briton who lives in Spain, runs a real estate agency selling abandoned villages and other historic properties. Here Adkinson stands amid buildings for sale in the abandoned village of O Penso.

Lauren Frayer for NPR
Down a track about a mile long, he arrives at the village of O Penso — which has "100 acres of land, a total of six houses, two barns and a big cattle barn that'll hold 70 cattle," he says.

The village, near Ortigueira, comes with free well water and a bakery with a stone hearth. Six miles away, green cliffs drop off onto white sand beaches — and some of Europe's best surfing.

The biggest of the village houses has hardwood floors and five bedrooms overlooking an orchard with peaches, figs, walnuts, apples and pears. At the bottom of the valley, there's a little river full of trout.

The asking price for the whole village: About $230,000 — negotiable. Smaller villages with less fertile land go for tens of thousands. Adkinson has one house for sale for $5,600.

Prospective buyers include British retirees, Adkinson says, and an Indian who's expressed interest in converting the hamlet into a yoga retreat center.

"There's also an American who already lives in Spain and wants to set up an English school here," he says. "I've got lots of buyers who want to go back to nature — and let's face it, there's nothing more natural than this."

O Penso's last resident died a decade ago — leaving the village uninhabited for the first time in perhaps 500 years.

In the surrounding area, "When you talk to the old people, tears come into their eyes," Adkinson says. "They say, 'Oh, there were a lot of kids, this place was alive!' They'd like to see these places picked up and turned around. They don't want them to die."

But many local Spaniards just don't want to live in villages anymore. They migrate to bigger cities for jobs, education, access to public transit and health care. 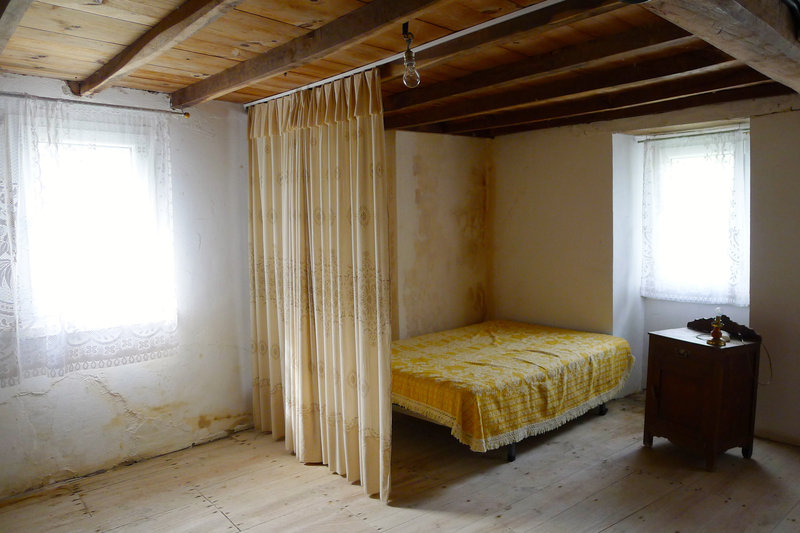 There are six abandoned houses in O Penso, a village for sale in northwest Spain.

Lauren Frayer for NPR
Back out on the paved road, at a tiny café, Maria Benedicta Fernandez meets with fellow retirees and reads the morning newspapers. She was among the last to leave the picturesque stone village where she was born. Only the four walls — no roof — remain of her ancestral family home. She prefers now to live in a rented apartment in a bigger town nearby, with a medical center.

"Everyone else left, too, or they've died, and the local school closed," Fernandez says. "There aren't enough children anymore."

Galicia's birth rate is 1.1 offspring per fertile woman — one of the lowest rates in all of Europe. The region is on track to lose a third of its population in the next 35 years.

So, desperate times call for desperate measures, says Avelino Luis de Francisco Martinez, the mayor of Cortegada, a rural town in southern Galicia. An abandoned hamlet that's part of his town isn't for sale. He's giving it away.

"For free! Someone just has to promise to renovate the 12 ruined houses," he says. "They're beautiful — bucolic! Next to a river and an 18th century royal procession path."

The challenge? "We just need to find someone to live here in this century," he says.

interesting, it seems like we've been hearing a lot of these stories of the past few years. I think the radical temperature shifts would be kind of a bummer though.
K

I closed my account
I volunteer to be the village winemaker, in charge of happiness and leisure.

Holy doo doo!... ... I would work and save up for this with some STP folks. We could have a monster of a squatter village in Spain. Grow some Grapes... make some wine, raise some sheep... or Lamas... smoke a J or two.

Fuck I wonder what the Currency laws are right now any restricions... moving a few grand overseas.

Matt Derrick said:
I think the radical temperature shifts would be kind of a bummer though.
Click to expand...

True, but you have to engineer around your environment sometimes.
People build greenhouses in snow covered winters and grow tomatoes.
The Good Fremen of Frank Herbert's Dune collect water and spice on Arrakis...
I'm sure there are ways to be sustainable In Spain. 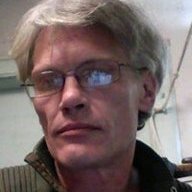 If any of you guys are serious about building a community in Spain we still have room for more investors and volunteers, check out https://www.facebook.com/2012collectiveLtd/?ref=bookmarks , be very graetful for grid references on possible sites, we are still in debate as to either buying or vadverse possessioin. I like thee idea of squatting and its means all capital goes to the rebuiuld, but we will see, planning a scouting misssion this coming spring
You must log in or register to reply here.

Bike Touring May 8, 2021
nomadicnormalcy
For sale: one Spanish village, free to the right owner