How to cross a border - via suitcase (1 Viewer)

hehe - this must have been funny as hell to watch as this guy emerged from a suitcase! There's a vid at the link of his suitcase escape. 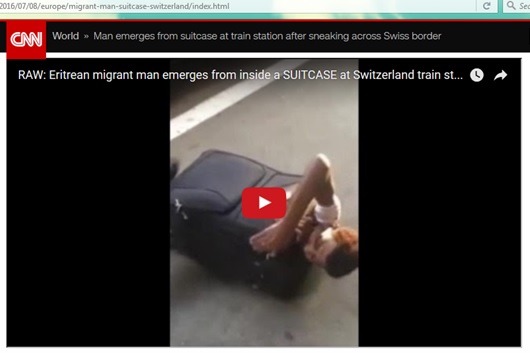 (CNN)Swiss rail travelers got a shock this week when a 21-year-old man unzipped himself from a bag placed on a station platform, officials told CNN.

A video shot by a Swiss border guard Monday showed a hand poking out of a suitcase struggling to open the zipper at a train station near the Italian border.

A guard unzips it the rest of the way freeing the tall man, who was from Eritrea. The man has packed himself inside the case to cross the border from Italy to Switzerland.

More than 220,000 migrants have entered Europe so far in 2016.
To reach Europe most refugees take a life endangering sea voyage. This year alone, almost 3,000 have died while crossing the Mediterranean.
The suitcase find illustrates the length migrants are willing to go not only to get to Europe, but to leave Southern Europe for countries believed to be more welcoming towards refugees.
Since May 30, more than 3,400 migrants have tried to enter Ticino -- the Swiss region where the suitcase was detected, according to news reports quoting Switzerland's federal customs administration.
The man inside the suitcase has been sent back to Italy.

I closed my account
i cant even touch my toes...
K

I closed my account
That's proof that huffing farts does not kill.


cantcureherpes said:
i cant even touch my toes...
Click to expand...

How To: 'The Crypto-Anarchist Bible' via The TCX Crypto Munitions Bureau