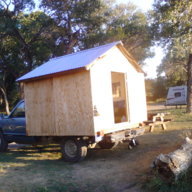 Here's a great book I found and have read several times. "Shantyboat" by Harland Hubbard. Harland Hubbard was an artist in the 1940's who built a shantyboat and drifted down the Ohio and Mississippi rivers and then into the bayous of Louisiana. People have compared him to Thoreau. The difference is he and his wife lived their lifestyle for 40 years. They drifted in the winters and made gardens and fished in the summers. It is an inspiring story for anyone interested in life on the water. I think that the rivers of the US are one of the few places that still offer the freedom to do something like this, even today. They lived by their own labor and with very little money but found great satisfaction and contentment. "I had no theories to prove. I merely wanted to try living by my own hands, independent as far as possible from a system of division of labor in which the participant loses most of the pleasure of making and growing things for himself. I wanted to bring in my own fuel and smell its sweet smoke as it burned on the hearth I had made. I wanted to grow my own food, catch it in the river, or forage after it. In short, I wanted to do as much as I could for myself, because I had already realized from partial experience the inexpressible joy of so doing." Harland Hubbard.

Introductions Feb 9, 2021
Stinkyyy
An Artist, a Shantyboat, and the Lost History of American River Communities