How the humble bicycle is making a comeback in US cities

As part of a series on the State of America, the BBC is profiling small businesses that have stories to tell about the way they work, and which say something about a wider national trend.

Towards the end of the 19th Century America was in the grip of cycling craze. Women in particular embraced the freedom it offered, and the humble bicycle became one of the most powerful symbols of female emancipation.

More than 100 years later, the bicycle is at the centre of another social revolution, challenging the dominance of the car in American cities and even changing the way urban areas look.

According to a report from the Alliance for Biking and Walking, there has been a steady increase in biking across the country over the last 10 years. In large urban areas like Washington, Minneapolis and Portland, Oregon, it's risen by as much as 71%

"Washington has become one of the leaders in the US for bicycling," says Greg Billing, executive director of the Washington Area Bicycling Association.

"We've added between 600,000 and 700,000 people to the city in the last decade. What's remarkable is that the level of traffic over that time has remained essentially flat because people are walking and biking more."

But while the bicycle liberated women in the 19th Century, today women make up just 29% of people who use bicycles to get to work. 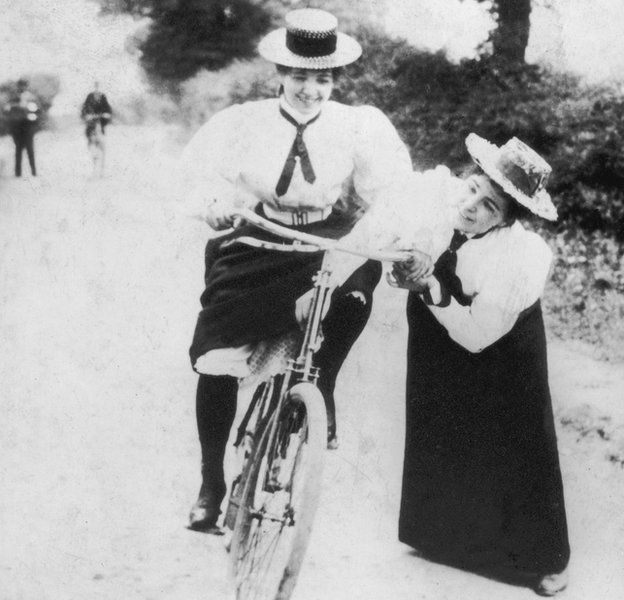 Image copyrightGETTY IMAGES
Image captionWomen embraced the bicycle when it was first introduced in the late 19th Century
"One of the reasons is risk aversion," Billing says. "Men are more willing to undertake a risky activity and there is a perception that biking is unsafe."

There were more than 38,000 traffic fatalities last year in the US, and roughly two cyclists are killed every day. While the total number of cyclists killed may seem low in comparison to motorists, those riding bicycles are more likely to be hurt.

The death toll among both have led many cities to adopt Vision Zero, a Swedish initiative that aims to end all traffic fatalities by 2024.

Making roads safe for bikers makes them safe for everybody, says Alex Doty, executive director of the League of American Bicyclists.

"We often talk about a standard we call 8 to 80 - does a grandmother feel comfortable riding on a street with her grandson? If they do, then that's a street that's got it right," he says.

That has spurred a big increase in bike lanes and cycling networks that are transforming the way people navigate cities. Los Angeles now has more than 800 miles of bike lanes. Protected bike lanes have been shown to increase cycling by up to 171%.

"We think in the US that everybody needs a car, but 45% of all car trips are under four miles. That's where people want more choices and in the US we're starting to see a change of attitude among younger people. Far fewer are getting driving licenses than at any time in recent US history," Doty says. 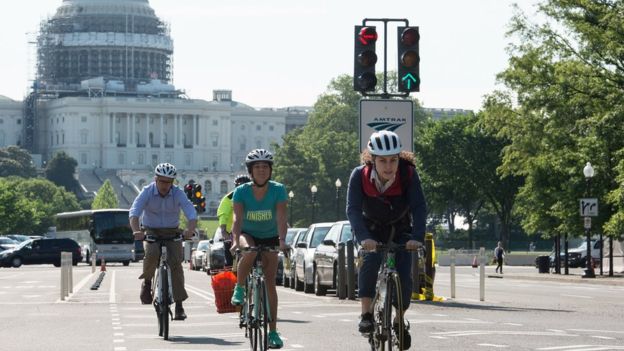 Image copyrightGETTY IMAGES
Image captionUS cities such as Washington have added miles of bike lanes in recent years
The investment in cycling infrastructure has led to the success of bike share systems, particularly in cities such as Washington where 20% of businesses near a bike share station reported an increase in sales and 70% said they had a "positive impact" on the surrounding area.

But the rapid change has also caused tensions with other road users and some communities who view cycling as an unwelcome sign of gentrification - a phrase used to describe an influx of wealth and changing demographics that displaces poorer residents, especially African Americans.

Last year the United House of Prayer in Washington argued the proposed introduction of a bike lane next to the historically African American church infringed on religious freedom by preventing members from parking.

But the transition in cities to shared bike systems and bike lanes remains a powerful trend that is critical to moving people around, says Kent Larson who heads the Media Lab's Changing Places research group and the CityScience initiative at MIT.

His team is developing a new type of bike that can be used by more people, particularly the elderly and disabled.

"You think of the demographic profile of bike a rider now as quite limited - younger people and more males than females. We are working on an electric vehicle that we think of as democratising bike lanes," he says. 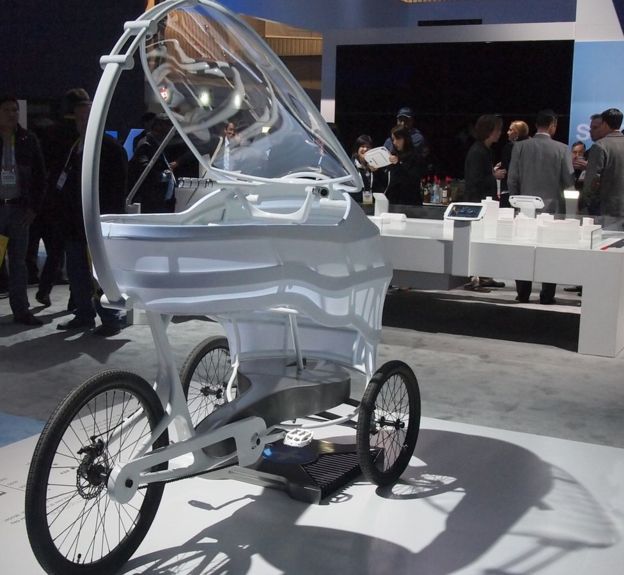 Image copyrightMIT
Image captionRiders of MIT's Persuasive Electric Vehicle do not need to wear a helmet
"It's an autonomous bicycle that comes to you wherever you are, drops you off at your destination and goes on its way. It's covered so you're protected from the rain and you don't have to wear a helmet which women often object to."

Ironically, the vehicle is being tested in Andorra because there is no funding to try it out in the US. It's also being made in Taiwan thanks to investment from the government there.

"In Asia, they haven't swung so far towards private ownership of cars and there are quite a lot of bicycles and scooters so it's easier for them to think of new modes of transport," Larson says.

But while MIT may be toying with futuristic designs, the basic shape of the bicycle hasn't changed much since 1892 when Wilbur and Orville Wright opened their first bicycle shop in Dayton, Ohio, and used the income to finance their experiments in aviation.

"The bicycle was the iPhone of its time. It was the new technology disrupter and attracted these great inventive talents," says Doty. "And as a piece of machinery it has stayed remarkably similar. The Wright brothers would know how to work on a bike in my house today."

That's an extraordinary testament to the power of two wheels that continues to shape the course of American history.
•••

And to add to the fun ... we have two of these operating in Rochester now - Have a dedicated driver and you do a pub crawl. Bicycling just got more fun!! 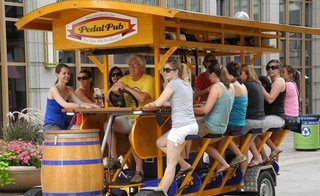