This is a really interesting article about The Horsedrawn Community in the UK. Having lived on a horsedrawn site for a while I can say that it's one of the better living situations I've been in. I've been to a few horsedrawn gatherings and I've not met such interesting and open people anywhere else. I think for an outsider it might seem like it's a closed community, but that's really not the case. Its not my heritage but I was accepted. If you are ever over here and you get a chance to go to a horsedrawn gathering then do it. I'm hopefully going to one at the end of August, I'll try and remember to actually take some photos this time. 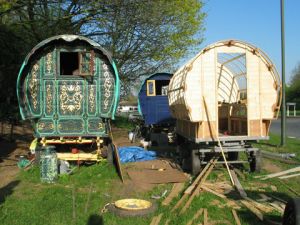 Wagons under construction near Redditch. Unlike many wagon builders,
Pete Delaney works where he lives, and has not taken up a yard.
Photo: Vjeko Vranic

Jean Vranic meets Pete Delaney, the remarkable traveller challenging stereotypes and proving that - even in modern Britain - alternative, sustainable lifestyles are still possible
When Pete Delaney and his family’s painted wagons arrive at the Sainsbury Island in Redditch, the local people know that Christmas has arrived. They've sold hand made holly wreaths and decorations at this spot for many years and when Christmas is over, Pete, his wife Rachel, their children and their sturdy horses are a regular feature in the lanes of Redditch and the nearby countryside.

Although many people assume their decorated homes belong to Romany gipsies, Pete and his family are actually known as 'horse drawn travellers'. There are approximately 1000 such travellers now and the number is growing. The Delaney’s home is a Romany Style Bowtop Vardo - the Romany word for caravan, taken from an Iranian word vurdon.

On a warm spring day, sitting around the camp fire under a thick coppice of trees seemed very appealing, but I wondered what it was like during the recent freezing weather conditions: Pete assured me that the caravans were as warm inside as a conventional home as they are heated by wood burning stoves. The only concessions to modern technology are the solar panels used to power the children’s d.v.d. players and a battery operated radio and mobile phone. Food is cooked over a camp fire.

Recently this family drew a great deal of interest by Pete building a new Bowtop wagon which could be seen on the side of the road, which he uses as his workshop. Unlike many wagon builders, Pete works where he lives, and has not taken up a yard.

It takes many hours of painstaking hand work to build the curved frame and then cover the frame with a canvas. Pete can supply just the frame for the buyer to decorate or do the complete decoration as well. He paints them in traditional scroll style using a great deal of paint and gold leaf which can cost several thousands of pounds. Rachel does some of the more intricate gold leaf work.

The gold leaf alone can cost up to £1000 per wagon and completely decorated wagons can sell at £60000 or more, depending on the art work and internal fittings, although Pete is yet to get one of those commissions. Most travellers build just for themselves and their family.

Well known as 'Pete the Painter', 'Pete the Brummie' or 'Pete the Hippy Traveller', some of his customers are fellow travellers, some are former travellers who have settled in conventional housing and want one for sentimentality’s sake, and the others are simply house owners who are enthusiasts of this type of accommodation and lifestyle. One traveller living on a 'settled' site bought a Bowtop as a Christmas surprise for his family and it now sits alongside their more conventional mobile home to be used by the children – a new take on a rumpus room.

In spite of the plethora of shiny motorhomes and conventional caravans, there are still people who prefer the romantic idea of an open air way of living and travelling with a horse, even if it is only for once a year. More of us may start considering this mode of transport as fuel prices soar and environmental concerns prompt us to rethink our lifestyles.

It was the love of horses that first drew Pete into travelling as a way of life. Leaving his Birmingham city home at the age of 17, like many young people at that time, Pete did a variety of casual jobs, such as grape picking in France, hop picking in Herefordshire and fruit picking in Worcestershire, which Pete now regards as home.

Whilst working with travellers on these farms, Pete got involved with horses and he soon realised he had a natural affinity with them. He has been called a 'horse whisperer' because of his knack of calming excitable horses. His favourite source of income is from training young horses and schooling them, and their owners, to draw carts and to cope with any hazards such as traffic and unexpected noise.

Any horse rider will know these can easily panic a horse. Having experienced some hair-raising moments, Pete – now a middle aged granddad - is considering giving up the more dangerous parts of training. He still breeds horses occasionally using his 16 year old stallion. Pete is known for producing friendly horses and currently owns eight and is training two.

Starting off with converted trucks, then bender* tents, Pete took to the road as a traveller. He taught himself how to make his first Bowtop** wagon 19 years ago and then as his family arrived and grew up he built more wagons for them. He still has two children living with him, a daughter aged 16 and son aged 13, each with their own wagon. His youngest son built most of his own wagon under his father’s instruction and is learning to decorate wagons as well. Cart constructions needs good numeracy and manual skills. Two older adult daughters live away from home. His eldest son travels with various music festivals.

Pete is a talented musician, with his own group 'The Hedgerow Crawlers' and he organises the Horse Drawn Camp and music festivals himself. One of them is the Beltane festival which has been held in various venues in Worcestershire for the last few years without problems, but had to be moved from Inkberrow at the last minute this year because of opposition from local villagers who feared 'the arrival of 500 gipsies' following the distribution of an anonymous leaflet to all homeowners.

The camp relocated to fields near a very select area of Redditch, owned by a sympathetic farmer, and although there were complaints in the paper a few days later by a few aggrieved neighbours, there were no problems reported to the police at the time.

The Ecologist visited the camp and apart from one roadside traffic cone showing the actual track entrance which led to the fields, there was no indication at all that there was a festival taking place. The noise was not discernible at all from the houses or even until you got right close to the tent some two fields away, where the music was playing.

Sadly those who opposed the festival had not bothered to find out about the organisation or the festival’s good reputation. Pete was very disheartened after this latest setback. The location of the summer solstice festival in Warwickshire was kept secret until the last minute to avoid further objections.

Villagers and townies can find out about all aspects of the horse drawn life and its rich culture at these events. There are demonstrations of horsemanship and craftsmen such as farriers, wheelwrights and blacksmiths show their work. Children today rarely get to see these activities or even have the opportunity to get close to horses.

The idea of the Horsedrawn Camp itself grew out of this particular group of travellers’ attending the Big Green Gathering in 2000. Up till then there had been no common gathering point. The Horsedrawn Camp is dedicated to presenting the horse and cart culture in the modern age and was formally constituted in 2007. Its aims are to create a gathering place and sense of purpose for the Horsedrawn Community at which they will be able to promote and demonstrate skills relevant to their way of life as a means of employment and sustainability. They enjoy sharing their way of life with outsiders.

All Pete and Rachel’s children have been home educated and have gained many life skills lacking in children more conventionally educated. Although subjected to inspections occasionally by educational officials, the children have all impressed them with their level of knowledge, literacy and numeracy. They are keen bookworms.

One educational inspector thought it appropriate to ask a five year old to read his golf club membership card as a reading test, rather than a child’s book, and was rather amazed when the lad could. His attitude however showed the contempt with which Pete and his fellow travellers are frequently treated.

There is much to be learnt from the culture of the horse drawn folk. Many of their ideas started with the Hippy movement but are even more relevant today as those of us who live more conventional lives are striving to adopt environmentally friendly lifestyles. Who knows, we may yet revert to horse drawn taxis in London - there’s plenty of grazing land in the Royal parks!

*Bender tent: made out of hazel twigs covered with canvas.
**Bowtop: this caravan has a front door and rear window. Weatherproof canvas is stretched firmly over an arched wooden frame. The ceiling inside is generally patterned and any woodwork inside is gaily painted.

I closed my account
My buddy Don has a horse-powered farm (Sheep dairy) up the road, and is one of many folks I've met over the years who work draft animals. He's very involved with the Northeast Draft Animal Power Network which has, among other things, a great web forum.

I absolutely love vardos and would have one in a heartbeat, if I lived in Europe.

.....here ya go I found some sheep camp headquarters and a guy that builds vargos..http://www.oldwesternwagons.com/sheepwagonscampwagons.html.....

Art101 said:
.....here ya go I found some sheep camp headquarters and a guy that builds vargos..http://www.oldwesternwagons.com/sheepwagonscampwagons.html.....
Click to expand...

Andrea you are a bad person...lol...now Im actually digging around and looking at sheep camp trailers and wagons and want one.I have seen them in Idaho off and on and always wondered about the. I am learning and falling in love.Once again shame on you.

Art101 said:
Andrea you are a bad person...lol...now Im actually digging around and looking at sheep camp trailers and wagons and want one.I have seen them in Idaho off and on and always wondered about the. I am learning and falling in love.Once again shame on you.[emoji14]
Click to expand...

Always happy, to corrupt others.

One of my dreams has been to be a campground host in the summer amd a lift operator in the winter and the vehicle drawn ones I have seen would be perfect for that.I love the wood burning stoves and one of the companies equips theirs with solar also.Kinda defeats the old school vibe but works great with going off grid totally.
You must log in or register to reply here.