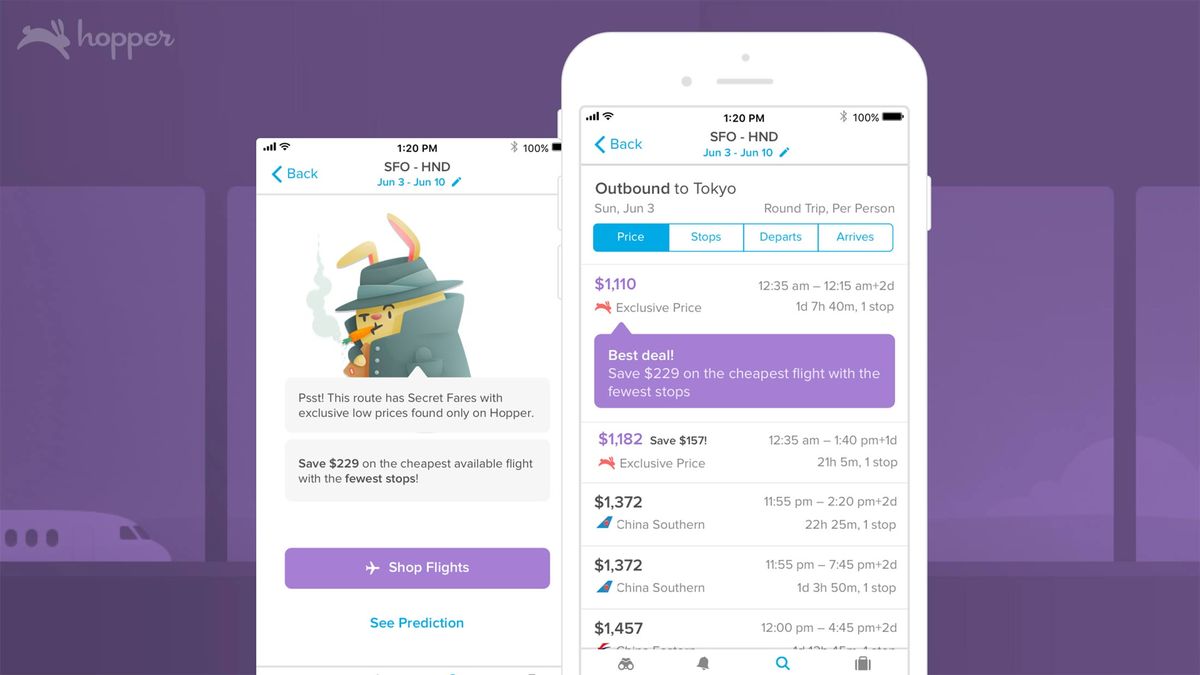 ​
The mobile app is the newest airline battlefield in the war over costs and passenger loyalty.

Jump onto Expedia or Priceline to search for a flight, and you’ll likely see an “opaque” fare: a price with no carrier or even the exact time. How does this help, one might ask. Well, it’s not meant to help you; it’s meant to help the airlines.

These mysterious fares are a tool that can help carriers move seats they have a hard time selling. This strategy is now turning even more complex with “secret fares,” the next evolution in the airline quest to more tightly control ticketing inventory and the costs imposed by companies that distribute their fares. It even involves an app.

On Wednesday, the mobile-only travel seller Hopper Inc. began offering these “secret fares” from a half-dozen airlines, including Air Canada, at prices that could be as much as 35 percent below what the same carriers publish elsewhere. The initial 60,000 routes covered will be international and mostly long-haul. The minimum discount is 5 percent below fares offered with full details elsewhere, according to Hopper. Air China Ltd., Panama’s Copa Holdings SA, Chile’s LATAM Airlines Group SA, Turkish Airlines and WestJet Airlines Ltd. are the other carriers participating in Hopper’s secret offerings.

“This is the first time in years that these airlines have actually allowed someone” to offer fares lower than what they offer publicly, said Dakota Smith, Hopper’s head of growth and business. “Because we’re mobile-only and don’t have a website, airlines are not seeing us as direct competition to their web fares.”

Source: Hopper Inc.
Montreal-based Hopper plans to add six airlines in the coming weeks and predicts that the U.S. Big Four (American, United Airlines Inc., Delta, Southwest Airlines Co.) will be interested because of the “closed” selling environment, one that’s invisible to online search engines such as Alphabet Inc.’s Google and Baidu Inc. They “can’t scrape our web site to see what we’re doing,” Smith said. “You also can’t link to these fares.”

Carriers the world over are keen to differentiate themselves—and the experience of flying with them—from rivals. This is part of an industry-wide move to train travelers to assess their flights on attributes beyond price, long the key criterion for consumers when deciding which airline to fly. Customers who select a secret price may find themselves on an airline they never considered before. Who knows? They might like it.

These obscured fares also point to a day when airlines will be better able to dynamically price tickets. Right now, carriers load their fares several times a day into a central clearinghouse, which then publishes them across global distribution platforms such as Sabre Corp., Travelport Worldwide Ltd. and Amadeus IT Group SA.


Airlines have battled these companies for years over costs. In 2011, efforts by American Airlines Group Inc. to elude the distribution firms by providing its own schedule and fare data directly to larger online travel agencies triggered a series of lawsuits over access to such data. In October, JetBlue Airways Corp. yanked its flights from 12 online ticket sellers to cut $20 million from its annual distribution expenses.

For an airline, however, the true value of a secret fare is the chance to snag a rival’s customer with a lower price—secretly. The platform is “completely private and doesn’t spark a competitive reaction,” Smith said.

Airlines see mobile as their most important way of selling tickets, according to a 2016 report by Atmosphere Research Group for the International Air Transport Association, an trade group. Of seven ticket distribution platforms, carriers rated their mobile apps most important, both today and going forward to 2021, according to the study, which examined the likely evolution of airline ticket distribution over the next five years.

“Airlines recognize that mobile will become passengers’ ‘first screen’ for connecting with airlines—and everyone and everything else in their lives,” Atmosphere Research Group analyst Henry Harteveldt wrote.

By 2021, more than 26 percent of leisure travelers and 20 percent of business passengers globally will be “mobile only,” operating with smartphones and tablets, rather than laptop or desktop computers, according to the Atmosphere report. A Pew Research Center survey released Monday found that 20 percent of Americans have a smartphone but no broadband internet at home. Among those 29 and younger, that figure jumps to 28 percent.

Hopper said it plans to add secret fares from “six or seven” additional carriers later this month, mostly international flights. The company will offer some domestic flights as well and said it’s “pretty far along” in talks with one of the three largest U.S. airlines about adding secret fares, he said. (Delta Air Lines Inc. doesn’t share any fares with Hopper.)

The app’s user can set a search for destination and price range, though the company said more than one-fifth of sales come from recommendations generated by its algorithm, not from the price alerts users set to track fares for a particular destination. In fact, Hopper said the app can be used to motivate travelers to change their destination entirely, an additional enticement for airlines.

“If the airline is interested in offering secret fares on routes they don’t serve, via our recommendation algorithm, we encourage them to offer a deeper discount to incentivize travelers to shift their destination,” Hopper spokeswoman Brianna Schneider said.

— With assistance by Mary Schlangenstein

I haven't personally used this app yet, but anything that makes flights cheaper I'm down to try, and I thought might be worth sharing to others here.
•••
You must log in or register to reply here.

How to Travel with a Cat