There have been 3 police raids on the Meadow Camp in Hambacher Forest over last several years. During those raids the police would enter the location of our support “eco village” camp located on private property with search warrants listing as reasons either searches for weapons or even explosives. The resulting confiscations however focused exclusively on electronic devices, that is the “Weapons of Mass Communication”. Commandeering tools and outlets for press work, documentation, photography of police behavior and brutality and legal documentation. This has been done days before even larger police actions. In effect silencing us electronically and leaving us not able to communicate to the outside world about what was taking place with limited documentation of police antics and no way to present conflicting evidence to the State’s so often trumped up accusations used to imprison our comrades for months without trial. With three of our comrades, Hambi3(#freehambi3), presently in prison.

First such electronics confiscation raid occurred already 4 years ago just days before Monkey Town Tree-Sit Eviction, with the second coming in 2016 days before RWE stock holders meeting that was a place for particularly intense protests. The equipment confiscated in both cases included all cell phones, digital cameras which by themselves do not hold any data, all data storage devices such as hard drives, USB drives and even CDs. This donated and mostly second hand equipment is then kept by the cops for over a year and for obvious reasons is difficult if not possible to use again even for above ground communications. 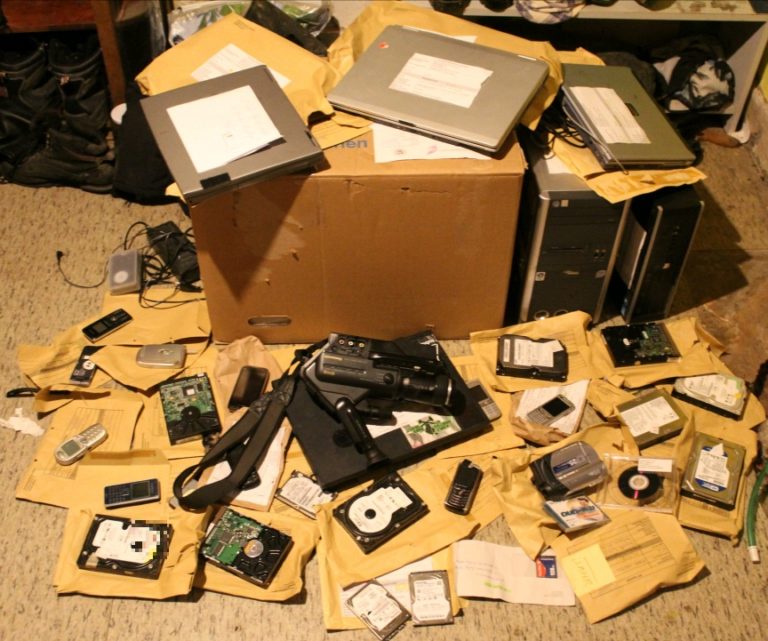 Equipment above is typically returned nonfunctional after one year in police hands.

Focusing searches and confiscations on electronic equipment when so much discourse, communication, press and legal work is now impossible without it has become the new way to censor and silence the anti-deforestation and Climate Justice movement in the Hambacher Forest and in Germany. This is happening at the time of escalation of Green Scare repression when the number of our comrades being put in prison has not been dropping below 3 with it being as high as 9. Imprisoned for several months without trial nor access of the defense to the evidence against them. All for misdemeanors charges such as resisting the police or a possession of small pocket knife while passively locking on and not able to move. With disproportionate, extrajudicial, and unjust punishment being the definition of being a political prisoners the treatment of our comrades more then satisfies this definition. Especially with state and coal industry driven campaign of response to the ever deepening climate crisis of their own making(RWE’s Coal is the single largest net CO2 emission source in Europe, and most toxic one at that)by the cooption of local law enforcement with its head positions such as Interior Minister of NRW, Herbert Reul responsible for the above actions, being on a board of Rheine Energie, and CDU and SPD politicians being openly on the employ as lobbyists for RWE and hence forming a present convinient alliance with the neo-nationalist AFD, Alternativ für Deutschland party in the Parliament of North Rhine to eliminate the Anti Coal resistance by criminalizing, imprisoning and staging of mass police raids involving hundreds of police for less than 20 environmental activists with AFD party member supervising under police protection. Their masters at RWE and other Climate killing industries might be satisfied, future generations perhaps not so much, and that is also why those same Fossil Fools interests exerting such a heavy influence have been profit loosing as they seem to have to pay off more and more individuals and purchase more and more media interest to function as instruments of damage control and propaganda. The role of Mainstream German media in this campaign to vilify environmental movement has been crucial with mainstream media quoting German tabloid in accusing environmental activist in Hambi of violent attacks on energy company CEO days before large restructuring and take over of that very same company. So to de-legitimize civil and direct action activists and to erode their wide public support for both the Forest Occupation and the Coal Phase Out while unprecedented global crisis is taking place. For that to continue keyboards, hard-drives, cameras and even monitors of the activists have to be taken away and fossil fuel and State narrative to become a matter of historical record for a Collapsing Carbon beaded civilization taking the whole Planet down as well.

This particular focus on mediums and instruments of mass communication shows how important of a tool and a weapon they are. Lets respond by renewed focus on documenting and disseminating what is happening in the 6 year Hambach Forest Occupation blocking the single largest net CO emitter in Europe RWE with its open cast lignite mines pushing the whole planet past numerous points of disaster no returns. All of this while RWE continues its imports of Columbian Blood Coal, with its contractors Prodecco and Drummond openly employing para-militaries theirs that have killed over 5000 and disappeared over 250 from mostly afro-Latin and indigenous communities in the very coal mining regions.

Please respond to all of this by encrypting your devices and communications and by reaching out to variety of groups fighting and resisting government surveillance and repression in Cyberspace such as those listed below. Without their focus and support on these issues it will not only become progressively easier to silence the environmental movement electronically but also to prevent it from communicating and extending solidarity toward even more affected areas of the packet where hundreds of environmental a activists are being executed each year. A warning to us all how elemental this struggle for Global Climate Justice is and what the risks of doing too little are:

Any efforts to organize a collection and donations of equipment such as digital cameras, phones, netbooks, laptops and tablets would be always highly appreciated especially following right after police raids and evictions when its most needed to send out press releases and do prisoner support. If you are in the area support in the time of emergency by documenting and forming a historical record by being on the scene with your phone and camera. If you are not in the area please spread this information and support this and other social and eco justice struggles world-wide.

For the Wild, Climate and the Planet!