Brazil Is Giving Ayahuasca To Prison Inmates On Their Path To Redemption
April 9, 2015 by Jeff Roberts. 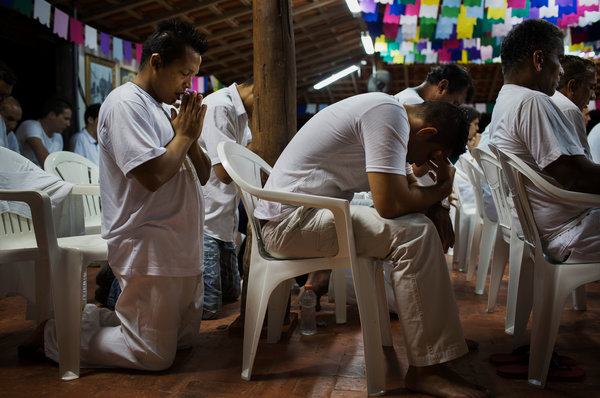 In a quest to ease pressures on the Brazilian prison system, mental health workers have opted to give prison inmates the psychedelic brew ayahuasca, in the hopes of helping them to work through their deeply-rooted emotional traumas.

It is no secret that the current prison system is in shambles. Over crowded holding spaces, abusive staff, unsanitary living conditions – these types of environments are rarely conducive to redemption and rehabilitation, but instead almost always seed further violence, aggression, and feelings of alienation from society.

While some prisons are now offering holistic services such as yoga, meditation, and Reiki, prisoners’ rights advocacy group Acuda is taking it one step further, offering Brazilian prisoners a real shot at a new life through the use of the traditional Amazonian brew, ayahuasca.

Ayahuasca is a psychoactive brew that combines a specific Amazonian vine (Banisteriopsis caapi) with a leaf (Psychotria viridis), creating an extremely pungent, orally-active cocktail of DMT, a powerful psychedelic known to induce mystical and life changing experiences for its user.

At first, Acuda had trouble finding a place where the inmates could drink the ayahuasca, but they were finally accepted by an offshoot of Santo Daime, a Brazilian religion founded in the 1930s which blends Catholicism, African traditions, and the trance communications with spirits popularized in the 19th century by a Frenchman known as Allan Kardec.

“Many people in Brazil believe that inmates must suffer, enduring hunger and depravity,” said Euza Beloti to the NY Times, a psychologist with Acuda, “This thinking bolsters a system where prisoners return to society more violent than when they entered prison. [At Acuda] we simply see inmates as human beings with the capacity to change.”

Supervisors at Acuda, who obtain a judge’s permission to take about 15 prisoners once a month to the temple ceremony, say they are mindful of the risks of ayahuasca, commonly called Daime in Brazil or referred to as tea. At the same time, Acuda’s therapists consume the brew with the inmates, as well as with the occasional prison guard who volunteers to accompany the group.

“This is how it should be,” said Virgílio Siqueira, 55, a retired police officer who works as a guard at the prison complex that includes Acuda. “It’s gratifying to know that we can sit here in the forest, drink our Daime, sing our hymns, exist in peace.”

But in a country where conservative views are ever-growing in response to continual violence and crime, not everyone is convinced this intervention is okay. 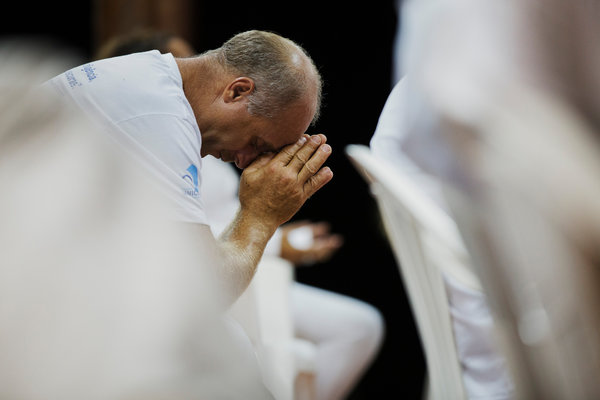 “Where are the massages and the therapy for us?” asked Paulo Freitas, a 48-year-old manager at a leather factory whose 18-year-old daughter, Naiara, a college student, was kidnapped, raped, and murdered in Porto Velho in 2013 by a group of men – a crime that stunned many people in this corner of the Amazon.

Whether or not we should be providing convicts with therapies that could be considered “luxury” is a justified question no doubt. However, we cannot ignore the fact that many criminals eventually return to society after their sentence. Do we want to see these people as a product of years of violence and aggression, most likely repeating their offences, or would we rather have them come out of their sentence with new insights, a new perspective on their past choices, and a chance to do things differently?

“We are considered the trash of Brazil, but this place accepts us,” said Darci Altair Santos da Silva, 43, a construction worker serving a 13-year sentence for sexual abuse of a child under 14. “I know what I did was very cruel. The tea helped me reflect on this fact, on the possibility that one day I can find redemption.”
Reactions: roughdraft, johnny possum, sandpaper cowboy and 2 others
•••

<bows to @wizehop > While I am a sherlock holmes kinda internet surfer able to find obscure items and track down hoaxes and stories - but you really do seem to find some interesting things. Good stuff!!!
••• 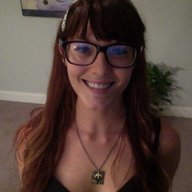