I got some pocket money from my grandpa for christmas

and I want to get a wind up radio for my van. I've been pulling my hair out with boredom recently because my solar power isn't doing its thing and thought a wind up radio would keep me entertained without draining any batteries.

Just wondering if anyone has got one and can recommend a make or model? Anyone got any pointers on what to look for in a good wind up radio?
•••

I picked up a used Red Cross branded crank-up radio at a boot sale here in the States. Not that I needed it but being a radio nerd I had to have it. This has the standard AM/FM broadcast bands as well as 7 bands of International Shortwave Broadcast bands. as well as a flashlight,siren and a USB charging port. 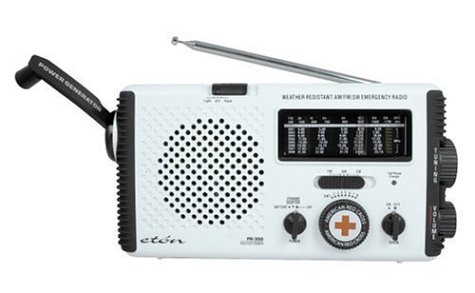 Everything does work but be warned that the fidelity from the speaker is lacking but this was sold as an emergency preparedness item.

My biggest gripe with it is the playtime from the crank is nowhere near the time the manufacturer claims but this could be from a degraded battery pack being a used item. but for a$1 I won't bitch too much about it.
•••

I closed my account
Can I borrow a couple bucks?

I've used eton (I own the scorpion II) radios. The cranks on the radios will probably be the first thing to fail so I end up using the solar or usb charger and save the crank for a rainy day.

Maybe try something which is powered by AA batteries which will run for days if you don't play it too loud or constantly.

Then buy some eneloop rechargeable batteries.

Sorry about all this name brand shit, but poor people can't afford to be doing this twice.
•••

build your own from radio shack components. parts are cheap; youll gain extensive and extremely useful knowledge. and... best of all... you can create yr own custom beast with only the features you want and no fru fru stuff you dont need.

but hey. maybe youre not into the whole turning your van into a guerrilla comms mobile unit just yet...so, yeahhh...

this is my dream baby: it can link up to real time sat data...so in conjunction with a $30 toy drone you have virtually unlimited capabilities. global uplinks; remote vid; data streams from wherever/whenever you are...oh yeah. and it picks up my muthafukkin kqed npr. lol

The batteries last forever. But its mostly because I don't want to carry the heavier crank ones. I've thought about going with the eton.
•••
K

Fox Spirit said:
pocket radio
$10
wallshart.
The batteries last forever. But its mostly because I don't want to carry the heavier crank ones. I've thought about going with the eton.
Click to expand...

The cool thing about a $10 radio is fewer tears when you break it.

Add this and you're jammin' for days:

7xMichael said:
The cool thing about a $10 radio is fewer tears when you break it.

Add this and you're jammin' for days:

i pretty much use the eneloop batteries exclusively. a side tip if you're getting a charger, make sure it will charge each battery individually, as some will only start charging if there is a pair of batteries (e.g. 2 or 4 batteries = charging; 1 or 3 = not charging the 1st if it's the only one, and not charging the 3rd battery if there's only 3 batteries in the charger [out of 4]).
•••

I ended up buying a battery powered radio (this one in fact http://www.argos.co.uk/static/Product/partNumber/3386037.htm) because it seemed that the wind up ones take a lot of cranking for not much output like 2 minutes cranking for 5 minutes play time seems a but rubbish to me. They also seemed pretty expensive to get a DAB/FM radio compared to a battery one.

I'd really like to be using rechargeable batteries but my issue is that I rarely get to be anywhere that I could plug the charger in. I'll look into it tough. there may be a way. I'm already saving up for 2 new deep cycle batteries and another solar panel for my van. I am not having another winter sat in the dark or silence!
•••
K

landpirate said:
I'd really like to be using rechargeable batteries but my issue is that I rarely get to be anywhere that I could plug the charger in.
Click to expand...

Ah ha cigarette lighter inverter, of course! Thanks 7xMichael
•••
You must log in or register to reply here.

Introductions Aug 12, 2021
SlabGrabber
Rats, theft, trains and being a dumbass :)