I deleted myself
In the small town of Delta, Colorado there's a guy who walks around town leading a horse, it's usually saddled. The horse is in top condition and although I've never owned a horse, I shoveled enough shit working at stables to know top condition. Sometimes this guy will be wearing a sign around his neck that says 'homeless veteran'.
A few times I've stopped in the morning and gave him as much as I could afford to give when I was able to, it's never been as much or as often as I'd like. Since Ive always been on my way to the seasonal job I've never had time to talk to him, other than to say hello. The logistics of traveling with a horse in the desert, in the modern world, have to complicate an already difficult life to a degree that I can't imagine.
A very few times I've wondered if he was running a scam. You know, like those people that you hear of spanging all day then running to jump in their Mercedes to drive to a house in the burbs. Well that all changed yesterday.
It's getting hot out here in the day time, not yet as hot as it will be but yesterday afternoon was in the eighties with full sun and zero wind. As I'm leaving town for the camp site I see this guy with his horse walking like I've seen them several times before but something looks different. I approached and saw a sight that will stay with me all of my days. He's leading the horse, like always, but the horse doesn't have the saddle on his/her back or anything else for that matter, except the lead. The guy has a pack on with all of his stuff in it and all of the horses gear on it as well. In case my writing didn't come through as clear - the guy is toting the horses gear including saddle so the horse doesn't have to bc it's so damn hot! I always knew that the guy would make sure the horse was cared for before he cared for himself but seeing him carrying that saddle for the horse just added a whole new dimension to the equation.
I doubt that guy is on this site but I hope he is bc all I have to say to him is WELL DONE, SIR! I never call anyone sir but I think this guy deserves it. Seeing random acts a unbelievableness such as this is one of the main reasons why I travel. While it may seem stupid to most, seeing this one thing went a long way to restoring some of my faith in humanity.

Interesting - on another site (facebook) I moderate there is a guy who originally intended to travel with his horse and gear - and he did some small trips that were successful till his roaddawg needed to go elsewhere and so he did as well, leaving the horse with original owner's farm. He originally intended to do a cross country. But he was from FL and your person is CO. I do remember reading about a guy and a goat doing some long distance travel though - I think there is/are some posts about that here somewhere. 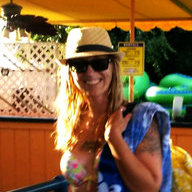 That is so cool. It just shows how some of us really love our animals. I know, speaking for myself, that I buy dog food before I think about eating myself. Our pets depend on us and when we take them in we take the responsibility of caring for them. Some people have an attitude of, "If you don't have a safe home, or enough money, to afford caring for a pet {by their standards of course} you shouldn't get one." But sometimes our circumstances change. Life happens, things go wrong and we find ourselves struggling to care for our animals, not to mention ourselves. It's easy to say that someone should find a good home for them if you can't care for them anymore, but for most of us, our pets are family. Would someone give their children away because times got tough? It makes me sad to think of anyone who has a pet they love, who finds themselves in the position where they actually have to make the choice between their comfort or their pet's. (I can relate.) But it's good to know that there are people who choose to do the best they can for their animals. I've been worried about how to keep my 2 dogs with me after just being evicted. I can't even imagine if I had a horse to care for. I am in awe of that guy.
OP
D

I deleted myself
Awesome. Hell when it's too hot out too my dogs pack is strapped to my pack. Cool though. Wonder if he moves around
You must log in or register to reply here.
Similar threads
News & Blogs How to Travel with a Cat (incl. Flying with a Cat)
DIY service dog card
Best Breed Of Dog For Travels.
News & Blogs How to Travel with a Cat
Traveling with a blind dog any advice
Was able to help a fellow travelers today.
My furry companion traveler
Featured The Anarchist's Guide To Travel... ing with a rat
Travelling with a pet rat
PSA regarding traveling folks with dogs
Share:
Facebook Twitter Reddit Pinterest Tumblr WhatsApp Email Link