today was the shit (1 Viewer) 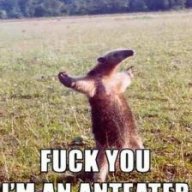 i was gettin a bit bored earlier today so i decided to hitch out to my old hangout spot in my old town from a few years back, it was this amazing over pass that all the trains in the area have to go under to get anywhere. the entire underside of the bridge is completely covered in some of the most amazing graffiti ive ever seen, and i myself am a writer. i walked for about an hour till i finally got picked up by some crazy redneck broad in a monster of a pick up truck. she took only took me to the other side of town but its only a five mile walk to the bridge from where she dropped me off. i was guzzlin down my half pint of vodka that i ripped off from jewel the day before and it decided to all be gone about ten minutes into the walk. i was needless to say bummed. quite fucking bummed!!!!!! and low and behold i stumble upon a sixpack and two fourtys. now one would usually assume that a six pack and some fourtys would be accompanied by somebody, but i negelected to think that at the time. so i grabbed one of the fourtys and started downing that s.o.b. next thing i know im being wrestled to the ground by a grizzly crusty bastid! we rolled arround in the mud for like 5 minutes before i realised who it was. one of my best friends from highschool who i was told had od'd and died a few months ago. after this realization was made we sat down and reminisced on old times. hes been livin near that overpass for the entire winter. and i have been goin there for years, we use to hang out there as kids. i guess he decided hed had enough of the suburban wasteland we are inhabiting and was gettin his shit ready for a long trip down to the everglades. and caught the last freight we say on its way to chicago. its seven o clock and im already drunk. i have a good feeling about this night hahahahaha.:crew: 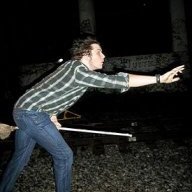 That's cool you reunited with your old friend, good luck on the trip man!
You must log in or register to reply here.