I found this and saved it offline, but now the page doesn't seem to be there anymore. Anyways, I thought I'd post it here in case it helps anyone.

The difference in hitchhiking between the USA and Europe

Two different continents, the same way of traveling. As an extreme budget traveler my main form of transportation is hitchhiking. People who know me will know that I mostly hitchhike by just standing next to the road with a sign or even without. I hardly ever talk to people at the gas stations to ask for a ride, and for me this just works fine. As I have experience on both continents now I would like to tell you more about the differences between them and how you can improve your hitchhiking skills in these places.

In Europe we have in general only one name, highways. In the USA they use two different sorts of roads, the Interstates and the highways. You can compare both of them to the general highways we have in Europe, but the difference in the USA is that you are allowed to walk on the highways, something you can not do on the Interstates. Make sure you know the different sort of road you are hitchhiking on to avoid harassment from the state troopers. I’ve walked on the Interstate and I have seen a few cops and troopers pass by, so far they didn’t stop, but keep in mind that it is illegal to walk on the Interstates and it does give them a reason to bother you.

The general concept of hitchhiking

Where in Europe hitchhiking is a widely accepted concept, it’s seen completely different in the USA. The main difference is that in Europe a lot of young people hitchhike for fun and we have many countries where it is very easy, like France and Germany. In the USA they think that all hitchhikers are homeless and they do now know about the European style backpackers. This is something you will need to explain to most drivers, tell them that it’s pretty normal in Europe and a lot of people use it as a form of transportation. Something you will hear from many drivers that pick you up is that you don’t look like a hitchhiker. Like I said, most hitchhikers in the USA are homeless bums and most people do not want them in their car. Occasionally it will also happen that someone will pull over and give you money or food instead of a ride.

Where in Europe a ride with a car goes much faster, it doesn’t make that huge of a difference in the USA. The speed limit for most trucks in Europe is either 80 km/h or 90 km/h, depending on in which country you are in, and the car speed limit is mostly 120 km/h or 130 km/h. In the USA the speed limit for mostly 65, 70 or 75 miles an hour. This counts for both the trucks and the cars in most times. Of course the car ride will be faster in most cases, but the difference is not as large in the USA as it is in Europe.

A side not is that it is a lot harder to catch a ride these days with truck drivers due to a change in the insurance law. A second person is not insured in the USA and most companies disallow truck drivers to pick up hitchhikers for this reason. It’s not impossible, but it is harder. Some truck drivers do own their own truck and they are more likely to pick you up.

On and off ramp and shoulder

The biggest benefit in the USA I’ve experienced so far are the very wide on and off ramps to the Interstates. There is a lot of space to stop and most of the times it’s allowed as well. People stop on the shoulders to make phone calls, clean up their car or even to take a picture. In the beginning I was very surprised by this, but it seems to be totally normal for the Americans. In Europe this is not as common as there is a huge ticket fine for parking for no reason on the shoulder or emergency lane of a highway.

So far I’ve only hitchhiked in the southern part of the USA. I’ve been in Florida, Alabama, Mississippi, Louisiana and Texas. Many people will warn you for a lot of crazy people, but so far I have not found a single problem or dangerous situation yet. As of how hard it is to hitchhike in the USA, the opinions vary largely. For me personally I don’t find it harder in the USA, but the reason for that is that I just look like an average European student with a huge backpack. More then once I’ve heard already that my driver normally never picks up a hitchhiker, but I look like a harmless student and he felt sorry I was standing next to the road. As always I can’t stress out much enough how important it is to look clean, shaven, have you hair done and don’t smell. It doesn’t matter where you are in the world, people are more likely to stop for you if you don’t look like a hobo. Of course sometimes it’s hard to stay clean while being on the road, but there is always water and whatsoever available on service stations.

The last thing I would want to tell you that it is also pretty common to be invited to someones house in the USA. On multiple occasions now I’ve been asked where I sleep and when you explain them you have a tent and a sleeping bag they will feel pretty sorry for you and invite you to their home. As I’ve said before already, most Americans think that only homeless people hitchhike, so many of them will also offer you food and money for on the road.

I hope this helps you in your hitchhiking journey where ever you go. Take care and stay safe! 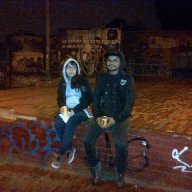 Very usefull article
•••
You must log in or register to reply here.