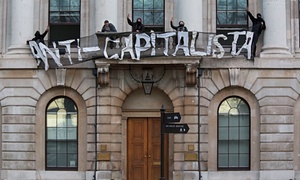 Squatters have occupied part of the former Royal Mint building opposite the Tower ofLondon to protest against issues including climate change, homelessness and the widening gap between rich and poor.

The activists, who comprise various groups from across the capital, unfurled banners on Tuesday that read “system change not climate change” and “104,000 homeless children at Christmas”, as they took over part of the grade II-listed Johnson Smirke building, which was built in 1807.

Though no longer used by Royal Mint, the property has been chosen for its financial history to send a new year message to the UK’s banking institutions that fundamental change is required.

The group entered the building, earmarked for redevelopment as a business complex, at about 4am on Monday morning and unfurled banners shortly after 2pm.

“We all need to live in a more sustainable way,” said Pete Phoenix, one of the squatters. “The way financial systems work is not conducive to protecting the planet. There is a complex of four huge buildings here. They could be used to provide accommodation for hundreds of homeless people. We could turn this place into an environmental solutions centre.”

The activists say that while big commercial buildings are empty and awaiting refurbishment, they should be used to provide short-term shelter for the homeless. They have invited nearby rough sleepers to shelter in the historic building for the duration of the occupation.

Tom, another of the squatters, said: “We
want to highlight the fraudulent nature of the banks with this protest and find some solutions to homelessness. The state is not helping homeless people so we would urge those who need a roof over their heads to do what we did – find commercial buildings where the windows have been left open and walk in."

The activists argue that there are more than a million empty buildings in Britain that could be used to house those living on the streets.

According to Land Registry records, the Royal Mint site was sold for £75m in April 2015 to a company incorporated in the British Virgin Isles – RMC FH. Representatives from the building’s managing agents, CBRE, hand-delivered a letter to the squatters on Tuesday warning them that the quality of the water had not been tested for some time and that the building may contain asbestos.

The activists said they would respect the building and promised to keep it cleanand undertake minor repairs during the occupation. The group said it intended to stay in the building until its members were evicted.

@Anagor - you just got there today - what's going on?!

It really is a waste to have abandoned buildings. One of the very busy homeless shelter's here run by feisty 79 yr old nun - managed to get a hold of a building downtown so the tented shelter winter homeless had a place to go --- but then got a huge give from an anonymous person of of an abandoned building he/she bought downtown and is having remodeled for use by her mission's homeless. Repurpose!!! 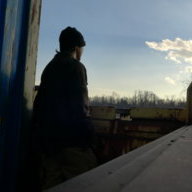 Tude said:
@Anagor - you just got there today - what's going on?!

It really is a waste to have abandoned buildings. One of the very busy homeless shelter's here run by feisty 79 yr old nun - managed to get a hold of a building downtown so the tented shelter winter homeless had a place to go --- but then got a huge give from an anonymous person of of an abandoned building he/she bought downtown and is having remodeled for use by her mission's homeless. Repurpose!!!
Click to expand...

where's that shelter at? Be cool to help work on that.

Tude said:
@Anagor - you just got there today - what's going on?!
Click to expand...