I deleted myself
Been keeping Shoe's emails and posting them on my site as a journal and shit. Thought ya'll might like to know about his current trip and the new hobo elections. All of 'em are at: DM&E Update

He's a welder in his hometown and has only ridden a few miles of rails, if any at all!!! (That's why I hate going to Britt)! They don't elect real, true hoboes!!!

Well, I'm just north of the USA border in the town of Coutts, Alberta, this morning!!! I got off in a siding last night after making it across the border at Sweetgrass, MT, on that local drag from Shelby. I'll for sure have to lay low in Canada after being depoprted three times before since 1992!!! (Twice from Newfoundland and once from Regina, SK)! If I get caught again, I'll more than likely do the full two years in federal lockup!!! As long as I stay low and keep a low profile, I'll be okay.
I think I'm gonna hitch hike from here to Lethbridge, (about 80 to 100 miles further north), then catch out from there to Calgary. From Calgary, who knows!!!

I only have about two more weeks before having to be back, now....... 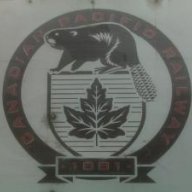 thats fuckin awesome, love to see the guy get back out again

Haha! He's taking close to the same route you were talking me out of taking IBRR. Thanx for the update, good to hear. Hope he is able to keep a low profile!

it would be nice to see him out west here. So easy to get out here too. Hell, i feel like heading east through the rockies now.

That's ballsy enough!, going over without permissions on the risk of doing two years for being ID-checked?!?
Here's to nothing happenin' to the mighty Shoestring, 'cept what he wants...
OP
I

ArrowInOre said:
good for him to get out there again. Here's something that just popped into my head too. if (travel gods forbid) he gets caught up there, with him having the health issues goin' on, he could easily play sick guy and get a free ride home... Really, has Canada ever really been that heartless as to deny a sick man his place of peace (home)? Here's to you Shoe, may your journey back be as safe and fun as the journey there...Come home safe brother...
Click to expand...

normally that would happen; however and i believe it's in one of his albums and ibrr.org Westbound Digital Project has a copy, he's been busted three times. so, mandatory 2 year sentence. personally, i think he would get better treatment in canada. lots of good things to say about socialized medicene. hell, look at cuba vs the 'first world countries'! phenomenal job cuba is doing!
OP
I

I deleted myself
latest email

Hey, buster!
I made it on to the Alyth Yard in Calgary late last night, then right away caught out east to Medicine Hat; where I'm at now. The next crew-change is at Swift Current, SK. (The crew-change after Swift Current is at Moose Jaw). I may go south from Moose Jaw, SK. down to the border at Portal, North Dakota and south to Minot, ND. Then from Minot to Fargo and Fargo to Willmar, then Willmar to Sioux Falls..........

PS..........So far, no bulls seen or any immigration officers, either!
You must log in or register to reply here.
Similar threads
Shoestring Hobo Hit By Car!
News & Blogs Shoestring is doing okay
Entering Canada on an air mattress
Travel Visa
Anyone want to talk in Ontario, Canada?
Mounties Foil Attempt to Blow up VIA Rail Trains in Canada
Photos The US and Canada...
GED in Canada
Canada day.
Share:
Facebook Twitter Reddit Pinterest Tumblr WhatsApp Email Link