A man driving a motor home with two of his children on board has led police on a car chase across Los Angeles-area freeways and into Kern County on Tuesday afternoon, police said.

The suspect, who was not identified, was involved in a dispute with his wife earlier Tuesday, according to California Highway Patrol Officer Kevin Tao, a public information officer for the agency's Southern Division.

The motor home was initially "involved in an accident" with Los Angeles County sheriff's deputies Tuesday morning in the Santa Clarita Valley, according to an agency spokesman.

When Los Angeles police officers encountered the vehicle near Hollywood Boulevard shortly before 3 p.m., they ordered it to pull over, according to an LAPD spokesman.

The CHP took over the pursuit as the suspect took to the 170 and 5 freeways and headed northbound on the 5, according to Tao.

The mother of the children has been in contact with the Los Angeles County Sheriff's Department and has been on the phone with the suspect as he is driving, Tao said. The woman has been trying to persuade the man to pull over, according to Tao, who said the suspect is the father of both children.

It was unclear whether the man was armed. 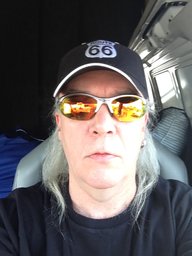 Only in California...land of fruits, nuts, and vegetables of all kinds.
OP
S

stormrider66 said:
Only in California...land of fruits, nuts, and vegetables of all kinds.
Click to expand...

Doesn't quite have the same ring to it as "Welcome to New Mexico, Land of Entrapment. Come on vacation, leave on probation"

I live on 95 and enter California above Reno during the summer. during the winter am south on 95 between Blythe and Palm Springs. California is not so bad. the exception of course is the cost of fuel. living in my van I have never been bothered in California or Nevada. Ever!
You must log in or register to reply here.
Share:
Facebook Twitter Reddit Pinterest Tumblr WhatsApp Email Link