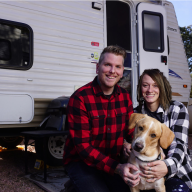 Thought id share my experience of the 2017 rubber tramp rendezvous... If anyone on here wants to share your experience please do.

I first heard about the rubber tramp rendezvous in the fall of 2015. It was after doing a lot of research on mobile life styles and really started checking out cheaprvliving.com. I'd had hope we would have been good and ready to attend the 2016 RTR but that of course didn't happen. It's now 2017 and we have been having a great time at this years RTR, even more than we imagined.
We arrived a bit early on the 7th I believe. Not many people here yet but a good few perhaps 30 or so. That changed quickly each day as it seemed at least 50 more came day after day. I think by the 10th the official start there were numbers in the 400s being talked of. People from every part of the country with all different backgrounds. In our area the first person we met was vanmandave. Choice of vehicle being an old campervan that belonged to his grandpa that he spent a lot of time in, in his childhood. What a great vehicle, lift kit for being able to travel in more places and a very well done remodel on the inside. Dave as a person is a very welcoming and down to earth human being, with long dreads and a goatee. Offering free hugs, and super with good conversation. I could probably go on and on about all the people but I think that would require writing a book, so I'll stay on track with the RTR experience.

The first official day everyone gathered in the morning for what they thought was an orientation meeting which wasn't planned, but the host of the event was gracious to talk with us a good bit welcoming everyone and giving a general itenirary about what to expect. Katy and I mostly sat out most of the morning seminars, a lot of the information seemed a bit recycled and have been done in video on YouTube, so instead we took our time relaxing in the morning and taking time with breakfast. The whole idea is to slow down and enjoy life, and we have been doing just that.
First night at the main fire pit was nice. A fellow played some reggae style music, which we enjoyed but didn't appear to be a big hit amongst many others, which started to lead to a mild uproar in the following days. Even though people had been asked not to play music in the main fire pit many did, and it caused a few to move camp a few washes over specifically for music. Katy and I didn't go to the main fire pit much, we preferred to have our own little fires with a few people here and there and enjoy good times with a little music and good conversation.

After a few days we had relocated out camp with vanmandave and it turned out to be much nicer. The people surrounding us were more our style. Our neighbor Steve being a very memorable character. Steve was Chinese and if I had to guess age, possibly 70 and still a huge adventure seeker. I kinda regret not trying to get his life story, but you never know when you can meet again on the road. He was kind enough to help with an issue regarding our fridge power. And once remedied would constantly remind me what a doh doh I was, but hey I'm not a genius.

Our first night at the new spot we had a Bon fire and music, and just about everyone in the area came over. A few fellas played some tunes, and we may have been a little loud, but no complaints the next day, and we had an amazing night that will definitely be remembered. Our new good friend Ron had a good bit to drink and we had to assist him back in I his van. Glad to have met that gentleman, he's a good man with a good heart.

This is where I'm gonna end this blog post, I think in the next one I will move on more to the people we have met. I feel I've already typed too much to keep anyone's interest. 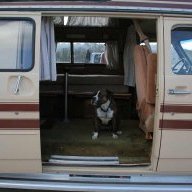 all I heard about was the music, holy hell they went on for a week about it.
OP

Yeah a few old fogies made it seem like the world was ending... We raged on and still had a good time.

you damn kids and your rock-n-roll 8 track cassettes!

Looks and sounds like it was a fun event! Thanks for the writ up.

Hahaha, @wanderlovejosh I am the other guy that helped you escort Ron back to his van that night. That bonfire was awesome.

RTR is a great event, I will definitely be attending next year, hopefully with a better rig. Kind of embarrassing to show up in a rig w/o solar, lol.
OP

SIB said:
Hahaha, @wanderlovejosh I am the other guy that helped you escort Ron back to his van that night. That bonfire was awesome.
Click to expand...

Lol gnarly man!! Thanks again for the good times and help!

After looking around on their site they seem like a very different breed...It's like reading RV.net with peeps rolling around in new class A's wondering if they can do it on a meager $50k a year.

...thats more money than I burn in a year and I run same shit on 80w
You must log in or register to reply here.
Similar threads
Going to rubber tramp rendezvous?
Advice for rubber tramping with no AC
News & Blogs The Rise of the Rubber Tramps
Rubber tramping with my 8yr old
Any websites that specialize in listing used converted vans?
Agreement reached on possession of Bus!!!!
News & Blogs Wothahellizat? Australia's largest 6x6 RV
Photos Photo Tour of my Bus
Video Leaving Slab City - packing up my bus and saying goodbyes
Thinking about buying a van
Share:
Facebook Twitter Reddit Pinterest Tumblr WhatsApp Email Link