I'm gonna go back to Mexico and visit a massive punk rock flea market, then write an article about it afterwards. I'm kind of curious about what subculture and being a punk is like down there in general, as I get the impression they treat it different than we do. It almost seems like different subcultures are at the level of different ethnic groups, with animosity and even violence occurring between them. Does anyone have any knowledge of how Mexicans view subculture, or thoughts about it? Even something you have heard from other people? Would love to get some ideas before heading down there.

Raging Bird said:
Does anyone have any knowledge of how Mexicans view subculture, or thoughts about it? Even something you have heard from other people? Would love to get some ideas before heading down there.

I live in El Paso, TX. Mexican people are awesome. They are super friendly, and really nice. The cops are corrupt, and take bribes. Hmm... lemme start over.

there are big regional differences. The same way that people in the "Dixie-Land Bible Belt South" are a different type of culture than the "Pacific Northwest College Town" cultures, you get a similar variation in Mexico, or any population for that matter. There's a border studies program at my university, lemme know what region/area you're thinking of going to, and I could give you links to cultural research materials.
•••

@Raging Bird who are you writing the article for?
•••

you might try hooking up with @christianarchy since it seems like he's got some good stuff going on down in TJ:

Thanks guys. I'll probably give it to Vice; I actually think they rule hard as shit when they're not devoting themselves to putting the trainhopping world on blast. I'm going to El Chopo in DF, so I guess the music subcultures in Mexico City would be the most relevant thing to learn about. Appreciate it if anyone has ever chilled down there. Someone told me that subcultures in Mexico are kind of racially divided, not segregated but the rich white kids are all into Psytrance while the darker mestizo kids are more punks and metaleros. I don't know, if someone asked me about what the scene is like in America I could go on for an hour about how punks are different in cities and suburbs, how the scene is different in teh north and the south, east coast and west coast, I guess I'm just curious about stuff like that in Mexico.
•••

Raging Bird said:
Thanks guys. I'll probably give it to Vice
Click to expand...

i thought you had a bad experience with them previously?
•••

Eh, they were really good guys, the bad experience just involved them not really knowing what they were doing and not seeming to have the street smarts to stay out of trouble. I got nothing against them, just kind of get sketched out when they start entering the train hopping world and prefer not to put the community on blast.

Also it's a massive organization at this point so it seems kind of clueless to hate it based on one experience with three people.
•••
P

For those interested here is a link to the market referenced.

El Chopo: Everything You Need to Know About Mexico's Most Alternative Marketplace

Read on for everything you need to know about Chopo Tianguis, one of Mexico's most alternative flea markets and unique city experiences.

It is an interesting place. Don't be there at night.
•••

Last I heard that market has kinda died down and not what it used to be but I never got a chance to go visit it. There is still plenty of people who are into punk and hardcore, you just need to know the where to find it.

When I was in Merida (Yucatan State), I went out to drink with some friends and on the way back to my hostel I heard this hardcore sound coming from this house. So I walked in the open hallway and saw a group watching this band play. I ended up hanging out and partying with them until the show was over. Solid people and they knew how to get down in the pit.
•••

They is lots of punks in mexico, i personnaly know a few squats, and some punk houses throughout the country. Mexicans dont really care about subculture but they are often related to sniffing gas out of tissue hidden in sleeves and walking around with spray paint on their face. In general theyre cool people.
••• 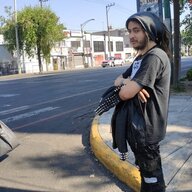 im from mexico. Ask me anything

Hobbies & Projects Jun 21, 2021
WildVirtue
Description of dirty kid squat i lived in, from an unpublished report