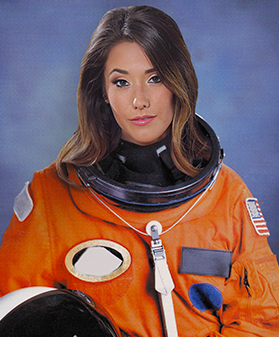 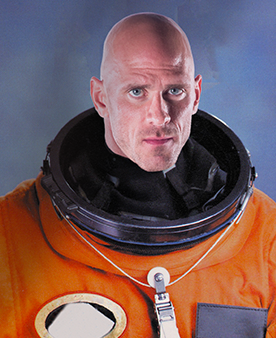 About half a century ago, humankind — inspired as much by Cold War geopolitics as the desire to go where no one has gone before — set its sights on that most distant horizon: space, the final frontier.

About 50 years in, that most distant horizon seems as far away as ever. Sure, we put satellites in orbit and sent men to the moon. But as NASA faces budget cuts and private corporations jockey for position in what’s now called the “space industry,” the “Jetsons”-ish hope of living extraterrestrially looks like a 1960s daydream.

But today, an enterprising company has jump-started what remains of the space race in a most unusual fashion.

“This is actually 100% real,” Corey Price, one of Pornhub’s vice presidents, wrote to The Washington Post in an e-mail.

IndieGogo video. “I’ve had sex on almost every different continent with all kinds of different women. Don’t get me wrong: I love what I do and who I do, but this is a really unique opportunity to break ground in the adult industry.”

While Lovia and, ahem, Sins might make unlikely pioneers, talk of Martian colonies and extraterrestrial emigration must include an understanding of what doing the nasty is like off of planet Earth. If humankind must flee Earth because of a resource crisis or asteroid impact, sex will be required for the species to survive. (Absent in vitro fertilization or other sex-free “Interstellar”-style scenarios, of course.)

Even physics superstar Stephen Hawking said sex in space was important — in a roundabout way.

“I believe that the long-term future of the human race must be in space,” Hawking said in 2010. “It will be difficult enough to avoid disaster on planet Earth in the next hundred years, let alone the next thousand, or million. The human race shouldn’t have all its eggs in one basket, or on one planet. Let’s hope we can avoid dropping the basket until we have spread the load.”

Whether Lovia and Sins would really be the first to copulate in orbit remains an open question. NASA and Russia’s space agency have denied astronauts rounded the bases — but, for the record, at least one married couple has gone to space together, and other astronauts have been accused of flirting.

“If astronauts have had space sex, it would have been very difficult,” Slate concluded in an examination of the topic in 2007. Not only does space offer limited privacy and a very busy schedule, but the physics could present a physical problem.

“Zero gravity can induce nausea — a less-than-promising sign for would-be lovers,” Christopher Beam wrote. “Astronauts also perspire a lot in flight, meaning sex without gravity would likely be hot, wet, and surrounded by small droplets of sweat. In addition, people normally experience lower blood pressure in space, which means reduced blood flow, which means … well, you know what that means.”

PornHub’s sexploration crowdfunding campaign, however, had yet to show much muscle of press time, raising just $5,000 of its $3.4 million goal. Interested supporters of the campaign take note: A $150,000 donation gets you “one of the 2 spacesuits worn by our sextronauts complete with underwear, plus a swag bag!”

Here is The Post’s e-mail exchange about the campaign with Corey Price, Pornhub’s vice president, edited for length and clarity.

Is this real, or just PR for a space-themed film?

This is actually 100% real. We’ve done all of the necessary legwork in terms of logistics, everything from bringing together all components and research for the equipment that we’ll need (and retrofitting said equipment), obtaining the necessary training for our crew and actors, which they’ll be beginning soon via a 6 month accelerated course, and learning what we can about suborbital environments in regards to production. We’re very serious, and if this happens the way we plan, then the world WILL be watching when we make history.

Where did this idea come from?

Honestly, we’re always looking for new and creative ways to push boundaries and use the theme of adult entertainment to do things no would normally expect us to. This is an extension of that thought process, and it’ll let us sort of nudge that envelope into a place that we’ve never been before. It’s exciting stuff!

What private space company will you use to do this — assuming NASA is not involved?

We are actually in talks with a number of consumer space travel companies, but given the nature of our endeavor, there’s a good chance for negative fallout should I divulge information regarding our talks with these aforementioned parties.

How did you choose Eva and Johnny – and how will they be “trained”?

We chose them because they’re known in the industry for being complete professionals in every sense of the word. They know how to take direction and never complain on set from what we’ve heard in the industry. They’ll be undergoing training akin to what most potential astronauts have to go through, just within a more accelerated program. This includes zero gravity training, velocity, and temperature training … they’ll also be taking classes from professionals about the dangers and precautions of space travel.

There’s a lot of research on whether sex in space is even possible. Any comment?

We’ve done some of our own research here and there, and admittedly there are some obstacles to overcome logistically but we’re totally game for the challenge. And I think with the amount of preparation we’re planning for this film, we may have an excellent chance to settle any speculation.
Last edited by a moderator: Jun 12, 2015

I closed my account
I bet I can make boner in space.

Pick me! Pick me!

East said:
“In doing so, we will not only be changing the face of the adult industry, we will also be chronicling how a core component of human life operates while in orbit.”
Click to expand...

OKay... I don't want to deflate everyones BONER for this... but I'm not sure they are really adding anything useful SCIENTIFICALLY spunking by screwing in zero G environment in low orbit.

Yes human reproduction will be important in space. But future larger scale exploration... if it is a space ship or space station for long term with a decent population we will need artificial gravity. (so the main mitigating factor of the mechanics of sex will not be present...) if that is some high tech force producing technology or just artificial gravity created through centrifugal force in a large enough spinning habitat or space ship.

any real changes in human reproduction gravity wise would be from the settling of a planet/moon with significantly different gravity... higher or lower. the curiosity is how fast changes would develop in human physiology in altered chemical and gravitational environs.... ie... moon men would tend to be taller with thinner bones perhaps...

Also if they are gonna do any competent research does that mean real scientists will go with them... and do they only get to watch or do some hands on field work?

I don't see much of a useful reason for this.
other than spank material for a lonely Friday night.

“I believe that the long-term future of the human race must be in space,” Hawking said in 2010. “It will be difficult enough to avoid disaster on planet Earth in the next hundred years, let alone the next thousand, or million. The human race shouldn’t have all its eggs in one basket, or on one planet. Let’s hope we can avoid dropping the basket until we have spread the load.”
Click to expand...

Haha... this is so taken out of context.

ALTHOUGH I SAID ALL OF THIS... I still think they should DO IT.

7xMichael said:
I bet I can make boner in space.

Pick me! Pick me!

Haha... if you have a problem getting it up... just punch a hole in the side of the space station... for the Ultimate Penis Pump.